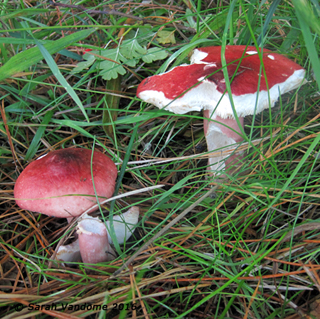 Take a walk through grassy fields, past hedgerows and along woodland footpaths, and you cannot help but notice the sheer variety of fungi emergent especially at this time of year.

Whilst the predominant colour seems to be white through to brown across many species, some fungi can be be very striking in both form and colour, standing out like these red Russula emetica. However, one that you are not likely to stumble across unless you are actively poking around in damp decaying undergrowth is a beautiful blue fungus, called Terana caerulea, common name Cobalt crust. 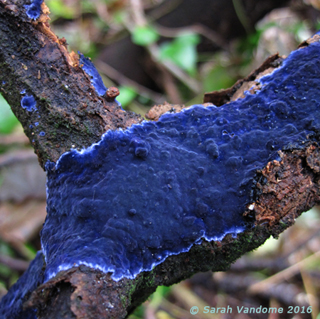 Cobalt crust, as its name suggests, is a crustose form of white rot fungus. It is not rare but is rarely recorded, owing to its preference for growing on the underside of dead wood on the forest floor. It is an important detrivore of such material, being able to completely break it down into component nutritional constituents for its own use, whilst helping to recycle decaying matter for reuptake by other living organisms. The fungus is also very tolerant of drought and seasonal extremes, becoming dormant in order to survive and reactivating when conditions become more favourable. The specimen pictured here was found near a woodland footpath in Froe woods during clearing work being undertaken by National Trust volunteers 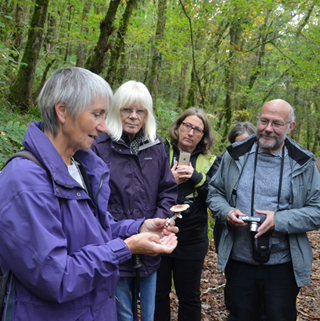 It was a beautiful day and this event was well attended, with over 20 participants. After a brief safety talk, we set off into Ruan Lanihorne woods, walking and talking along the way. We had not gone far before we saw our first mushroom, False Deathcap (Amarita Citrina) followed by Fly Agaric (Amarita Muscaria). The bright red colour of this mushroom, depicted below right, showed up well amidst the autumnal leaves scattered on the ground.

In all, we saw over twenty types of fungus, ranging from bracket fungi attached to trees, to the huge variety of mushrooms on the ground. One of the more strange ones was the Purple Jellydisc (Ascocoryne Sarcoides), depicted below left.

The most abundant found was Honey Fungus (Armillaria spp.) which is an indicator of the health of the woods.

We finished the morning off by returning to the village for tea and cake at the Reading Room where a coffee morning was being held. 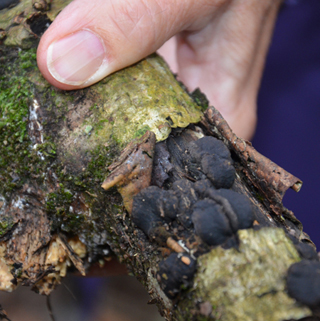 A highlight of the foray, which got the Cornwall Fungi Group experts excited, was finding the rare species Xylaria crozonensis – a small black button-like fungus found on dead oak, holly, etc.  This species is new to the UK since 2014 and is found in only a few places in Cornwall.

A big thank you to Pauline Penna and the Fungus Group, for a really enjoyable time, and to Mr & Mrs Martin for giving their permission to access the woodland at Ruan Lanihorne.

Forthcoming Wild Roseland Walks and Talks for your diary

Note that all our events are free but a small donation of £3 would be welcomed.

The Environmental Records Centre for Cornwall and the Isles of Scilly (ERCCIS), based at Cornwall Wildlife Trust, maintains important records of the occurrence of flora and fauna across Cornwall – a vital resource for monitoring species.  They rely on volunteers to submit records and sightings of species – common and rare, and Wild Roseland can make an important contribution to this.  This talk on the work of ERCCIS will include a workshop on how to use the recording system and submit records online.  (Bring your laptop or tablet for hands-on involvement.)

Return of the Chough. Talk by Claire Mucklow, RSPB

Claire will talk about the work of RSPB on the Roseland, in particular the recent return of the Chough.

Other things you can do for Nature in the Roseland

Soak in the fantastic views and fresh air whilst helping to keep these beautiful beaches clean.

Coming up in January: 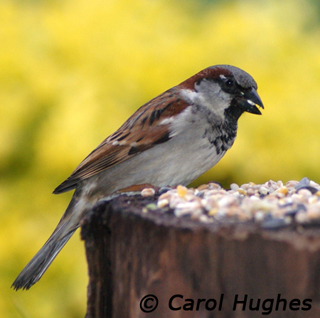 Every year the RSPB holds the Big Garden Birdwatch; many of you may already do this. For just an hour over that weekend you are asked to record the birds that visit your garden. It is fun for all the family, young and old alike.

Wild Roseland would like to take this opportunity to ask the people of the Roseland to join in and send your results to us as well, so that we can get an idea of what we have on the Roseland. Just send an email to carol.hughes27@btinternet.com saying what you have seen and where

As Christmas approaches have you considered presents for family, friends or yourself which would help to enhance Nature on the Roseland? There are lots of recognition books which introduce youngsters to wildlife. Some of the better known ones are the “I Spy” books or the RSPB’s “First” book of nature series. More advanced are the Collins or Helm publishers’ books on individual topics, such as the seashore, butterflies, trees, insects, birds or mammals.

Smart phone apps identification guides are also very useful. If you have skills with woodworking tools there are books with plans, as well as information online with details, guidance on making and siting simple nest boxes, animal or insect homes, or bird tables; all ideal Christmas presents. In January, earlier if it is mild, birds search for suitable nest sites and setup territory. There are also books which give advice on the kind of garden plants or feeders which will attract species to your garden. Do any of this and your Christmas presents then will have a benefit both for family, friends, and wildlife.