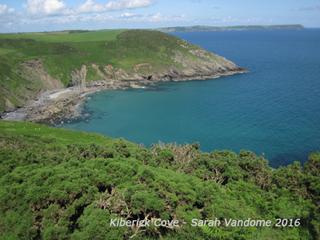 Cetacean sightings in Roseland waters always cause much excitement and attraction; not just for humans, but for other animals too, as David Hall explains.

In early January, I was amazed to witness dolphins herding fish just off Kiberick Cove near Gull Rock. By chance I happened to be in the right place at the right time to see this amazing spectacle. The dolphins were hunting collectively, gradually encircling the fish into a baitball and then slowly swimming through to consume them. Meanwhile Great black backed Gulls and Gannets fed in a noisy frenzy on the fish scraps surfacing within the circle.

There have been 40-50 Common Dolphins (Delphinus delphis) with Bottlenose Dolphins (Tursiops truncatus) in Gerrans Bay on some days this winter, breaking the surface and sometimes breaching the water and splashing back in. Occasionally the smaller, much less acrobatic, Common Porpoise (Phocoena phocoena) was reported. 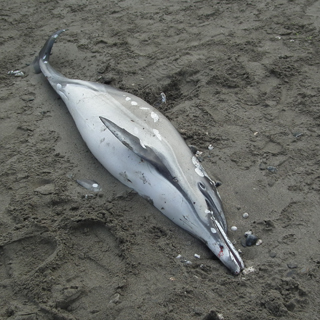 Dolphins live in sociable pods, communicate via clicks and whistles, and have great built-in sonar echo locators for fishing. Dolphins face many dangers. As they are mammals they can drown if trapped underwater, usually accidentally in seine nets, and are also affected by industrial pollutants and agricultural run-off, plastics and detritus. Loud underwater noises, e.g. from naval sonar or firing ranges, may disorientate them and damage the hearing upon which they depend so much. Survive all this and they can live for 40 years.

They are difficult to tell apart as sightings are often brief and distant. However, the Common Dolphin, about 2 metres long, is usually in socially large pods, breaking the surface frequently, with a longish black beak, dark grey back and white belly. It has a triangular dorsal fin midway down its back and sometimes you can see an hourglass silhouette down the sides of its body. The Bottlenose Dolphin, about 3 metres long, is usually in small active pods, and its sides do not have the obvious black and white contrast of the Common Dolphin. It gives the impression of a dark grey back and a lighter grey colour of belly. The beak is short compared to that of the Common Dolphin. Its distinguishing feature is the dorsal fin, midway down its back, shaped like a scythe at the trailing edge.

What wonderful cetaceans they are! Find out more at www.seawatchfoundation.org.uk, or read more from the referenced sources below. If you find any beached or dead dolphins on shore like the one I photographed here, report the stranding as quickly as possible to the Cornwall Wildlife Trust Strandings Hotline, (03452012626) or online at www.orks.org.uk. 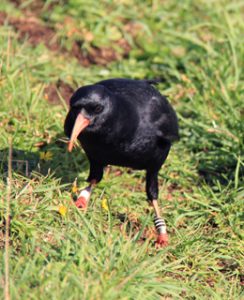 Return of the Chough by Claire Mucklow, RSPB.

Claire will talk about the work of the RSPB on the Roseland, in particular the recent return of the Chough to the cliffs around Pendower and Nare.

Despite the cold snap that bit towards the end of January, some species are already preparing to breed, or at least considering breeding requirements in the form of territory. The lengthening of days is influencing hormonal changes in the brains of animals, causing them (and probably us too) to feel the onset of spring. 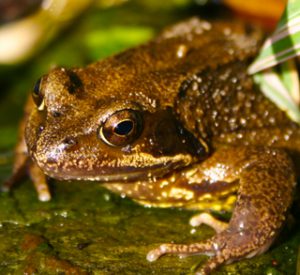 This winter has been incredibly mild, so now is also a good time to check ponds for frog spawn. Listen out now for skylarks who are already singing and displaying in the skies over farmland; Blue and Great tits are singing territorially in woodland, and the thrush species will soon be joining them. One of our most characterful corvids, the Raven, may already be incubating eggs, as well as performing spectacularly acrobatic sky dances to mates and rivals.

Picture of the month 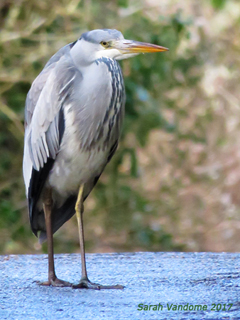 It always pays to carry a camera about, because photo opportunities arise when you least expect. This picture is of a Grey heron, that has apparently taken up residence near silage bales in a field at Percuil. Sometimes the bird can be seen standing in the road next to the field entrance. A camera with a good zoom is recommended, as the bird won’t tolerate too close an approach from humans.