An Octopus stranding on the Roseland 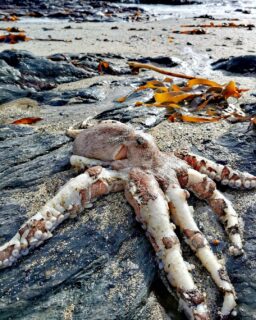 It is the stuff of legends, of ancient mosaics, of novels, portrayed as monstrous, frightening or nightmare inducing, all designed to trigger our worst imagination. It becomes the Kraken in films like “Pirates of the Caribbean” and is generally much maligned.

The truth is that it is one of the most intelligent of all creatures, equipped with cognitive skills, with wonderful abilities to camouflage itself, to defend itself, to be a shapeshifter and to have a totally sacrificial reproductive life!

Thanks to storm Darcy, it was found, like so much else on our beaches, thrown from the sea by the power of the waves. Sadly, this beauty was discovered stranded dead on Towan beach in mid February and photographed in situ by Laura White.

Octopi are quite amazing invertebrates and have remarkable survival strategies.They are solitary hunters on the seabed and in rocky crevices, living on small fish and crustaceans who 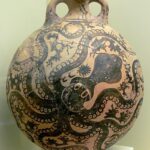 se shells they bite into with their toothed beak and then paralyse them with poisonous saliva and enzymes to aid the process of digestion! Don’t worry, only the Blue-ringed Octopus bite is really harmful to humans and that lives in the Pacific Ocean!

Ours is the Common Octopus, although that name belies the fact that it is still rare in Cornwall, especially one of this size. Laura estimated that its body was about the size of a dustbin lid and its arms outstretched would make it just under a metre, tip to tip.

If they are themselves being hunted they can change colour at will in less than a second to merge camouflaged with their surroundings. They have no skeletal bones so they can change shape rapidly too, as 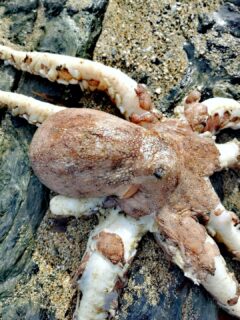 their body is mainly tissue. It is so flexible that any fully grown adult can go through holes as narrow as 2.5 centimetres, i.e the width of its parrot-like beak, the only hard part of its body.

If chased it can fire out, from a siphon on its body, dark ink which confuses its hunter. This siphon has a number of other uses. It is the octopus’s breathing tube, yet also acts as its waste disposal drain. If it wants to move rapidly to escape it can also use it as a water jet propulsion unit thrusting it through the water at speed, collectively quite amazing functions. 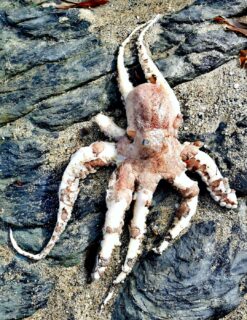 Surprising, but then it has other surprises; like three hearts and blue blood. In aquarium experiments it has shown just how intelligent it is, unscrewing jars for instance, or learning and remembering routines to obtain food.

If pursued to its den on the seabed, it may leave one arm out to distract its enemy, which is perhaps why so many octopi have part of an arm missing, as seen in Laura’s photo. Even that does not really matter as they have the capability to eventually grow a perfect replacement!

One of their arms also plays a vital role in their sex lives. The male having found a female produces parcels of sperm which it scoops onto this arm which has a spoon-like tip and then puts them into the female’s mantle to fertilise her eggs. After this, he begins to rapidly age and dies within a few more months. 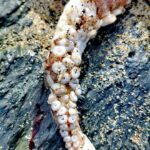 The female deposits the fertilised eggs, about 50,000 of them in a den which she stays with and guards until they hatch. Once they have hatched she also dies and the young for the early part of their lives live off plankton, and almost all of them fall prey to other invertebrates and fish.

The whole life cycle is no more than 3 to 4 years, if they are lucky. Life for them is about “eat or be eaten”; or sadly die and be thrown up on our shoreline here on the Roseland.

I hope you find this as fascinating as I did when I researched it.

Thank you for supporting Wild Roseland

With many thanks to:

Laura White for her photographs

Abby Crosby from Cornwall Wildlife Trust for her advice

Please use this number to report any of the following dead strandings; cephalopods including octopus, whales, dolphins, porpoises, seals, turtles, birds and fish including sharks, seeds, hydrozoa including Portuguese men o’ war, molluscs, echinoderms including starfish and sea urchins and crustaceans.

Carcasses of marine animals reported to the CWT MSN are then either examined in situ by trained volunteers, or via post mortem by a veterinary specialist.

These strandings have now been recorded for almost 30 years on the ERCCIS data systems. As a result an MSN database of around 9,200 records of strandings in Cornwall exists, giving us an insight into the way marine life is affected by natural or human influences on the environment of the sea.

Dave Cooper, the East Cornwall County Recorder, was booked to give an evening talk on “Dragonflies and Damselflies”, on the 30th March. Unfortunately this meeting is now postponed due to current Covid-19 restrictions.

Some of our wildflower areas need attention soon to ensure they are in full bloom this summer. In particular, Mike’s meadow will need a cut fairly soon and further sowing, including making use of seed collected from the site last September.

We will need to follow current government restrictions, but hopefully, groups of 6 will be able to meet socially distanced from 29th March, dependent on the results of the 4 test criteria being achieved at this stage.

If you want to volunteer to help, and are not already on the email list for work parties, please contact Simon Perry: simonperry21@gmail.com or mobile 07530822699.