Sallie Eden has coffee with local author, Wayne Hackman, to talk about his debut novel and future plans 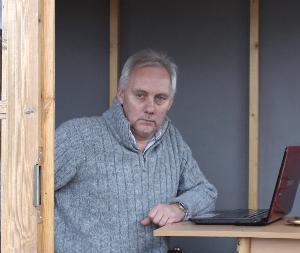 After a varied career, former soldier and police officer, Wayne took advantage of a change of direction to start writing seriously, drawing on his background in intelligence work and his knowledge of weapons and military operations.

His debut novel, Diablo , is set in mainland Spain and the Balearics, with violence, speedboats, helicopters, guns, drug running and sex. Employed to find bored, rich kid Billy and bring her home from Spain where she has become involved with petty criminals, former soldier Tristan is drawn into something far more sinister than he anticipated – the Diablo of the title, a brutal criminal organisation.

Wayne started work on Diablo around ten years ago, but, as with most projects, “life” got in the way and it wasn’t until last year that he was able to complete it. He says “although I had the whole story mapped out in my head, once I got into the actual writing there were some changes of direction to accommodate how the characters developed. And the time lapse between starting the book and completing it also meant a considerable rewrite in order to reflect a more current and relevant time and place. Luckily I enjoyed working with a loose plot structure, as it gave me flexibility and enabled me to adapt when characters developed a life of their own.”

“ I road tested the book on friends and my writers’ group. They were kind enough to say how much they enjoyed it and it has since attracted praise online. That has given me the confidence to carry on writing, with the aim of becoming a full time author.”

He says that “ever since prep school, I have known I wanted to write, even more so once my teachers started to praise the stories I had produced.”

And, what of life outside his writing?

Happily settled in Cornwall with wife, Jane, and three cats, Wayne enjoys playing golf and observing people. And like many writers, he has been a lifelong reader. “Books have always been a big part of my life, starting with Enid Blyton’s Famous Five and the Biggles books. After that, I was really hooked. Nowadays, I enjoy a range of books – thrillers, science fiction, crime, action stories and spy novels.”
His favourite authors include Ian Fleming, and Lee Child, so perhaps it was no coincidence that, in my pre-interview summary of Diablo, I noted that the lead character is part James Bond, part Jack Reacher (the original, not the Tom Cruise version; we had quite a discussion about that!).

“At some point, there will be a sequel to Diablo, possibly linking to other books, still in the planning stage. So, maybe two trilogies, with the final instalment of each merging into a single book, making a total of five books.”

“I’m currently working on a couple of things – another thriller, “The Tramp”, about human trafficking, and “Young Spirits” , a book for young adults, about four teenagers who die and return as ghosts, brought together to carry out a rescue operation.” The plot sounded intriguing and different to others in the genre, but you’ll have to buy the book as I’m not allowed to tell you what happens or why.

Diablo marks Wayne’s debut as a writer – and it’s a very worthy debut, so I hope we’ll see more of his work as he develops and builds on this book. He certainly doesn’t lack original ideas, or first-hand experience to draw on, so watch this space.