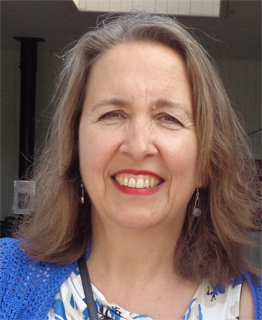 A great supporter of local charities, including Children’s Hospice South West, which her husband also supports, Patricia tells me that, although she loves most of Cornwall, St Ives has always been a favourite haunt. She says “I remember spending my childhood on its beaches, swimming and making sandcastles and walking its warren of quaint streets. As a child I thought the journey by train from Penzance quite magical, although having experienced the trip with my brood of three and their paraphernalia of buckets, spades and body-boards it is logistically challenging and requires the patience of a saint!”

Where do you get your inspiration? 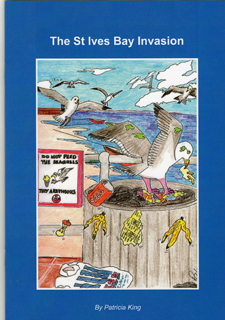 “From life really. For example, St Ives has a lot of seagulls and they are not afraid of humans. Signs have been put up telling us not to feed them because they can be vicious; sometimes it can feel as if you just stepped into Daphne du Maurier’s story, ‘The Birds’. One day, sitting on the seafront watching the boats, we were having our picnic when a seagull swooped down onto my sandwich; I kept a firm hold….I was not going to give up my food without a fight. The seagull decided that if he could not have it neither would I and he began to tap dance on my lunch; I won the struggle but the sandwich was covered with his sandy footprints. I was furious with the bird, but eventually found it funny.”

“Walking the coastal path by Godrevy lighthouse I came upon a cove, and there lying on the beach were grey seals. I noticed how each one had different markings, their colours ranging from grey, through to brown and black and how they differed in size, just like us. They had been basking in the sun when, for no apparent reason, they charged into the sea. Over 50 seals came out of a large cave and joined the dash into the water! At that moment, I knew that one day I would write a story about the Godrevy seals. And the tap dancing seagull? He became the lead character in ‘The St. Ives Bay Invasion’. The children’s stories seem to have a life of their own and characters such as Winston, Vera and our Gracie are still willing to fight the enemy on the beaches!” 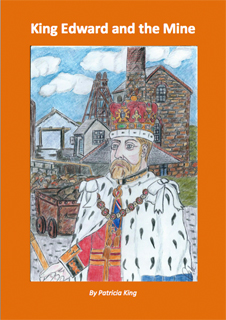 “My latest book ‘King Edward and the Mine’ was specially commissioned to make the mine ‘child friendly’. The director, Kevin Baker, had seen ‘The Peacock Prince of Trevarno’ and wondered if I could weave some magic over King Edward Mine. Our first meeting included a comprehensive tour of the mine, with an immense number of facts; two things registered above all – their aim to save this part of Cornwall’s industrial past for future generations and that it was completely run by volunteers, many of them former miners. I was happy to play a small part in the mine’s survival and I too became a volunteer, donating the story and the generated book sales to the mine.”

And some of the other charities you support? 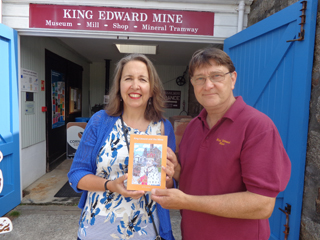 “Another one I support is the result of being widowed in 1998, when I used the services of Penhaligon’s Friends. I was happy to be able to thank them for the help they gave me and my children, by donating my children’s books.”

And what else should we know about you?

“Over the past two years I have entered three times in the Cornish Gorsedth competition in the Cornish dialect prose and verse categories and have gained three seconds, hopefully this will be the year of the firsts!