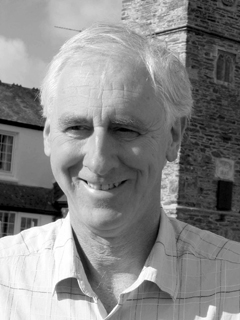 Born and bred in Cornwall, Frank is a natural story teller. So what a great way to spend a chilly autumn afternoon – coffee by the fire in the lounge of The Tresanton, listening to someone brimming over with enthusiasm about and knowledge of his subject.

I originally met Frank to talk about his interest in Tregony’s history, then we moved on to the subject of what he’s working on now and, no surprise this, quite early on I asked if he’d agree to another interview to talk more about some of his other areas of interest (see below).

He started by telling me that he had been closely associated with Tregony most of his life, although he had lived there for only a relatively short time. “My late mother (a Barnicoat by birth) was a native and she and my father lived there for 30 years. I now live in St Austell but retain my close links with Tregony and my interest in its history.”

That interest started quite simply – with family history, but it soon spread more broadly, into local history. “I’m not an historian but when I started to research and record information and to copy the photographs of events, people and places, I wanted to put together some sort of permanent record for the community. By that I mean, not just my relatives and those with a link to my family, but everyone with an interest in or involvement with the area.

“Old photographs and post cards from the late 19th and early 20th centuries were especially interesting. Tregony even had its own professional photographer (Joseph Greet) from the 1890s to the early 1920s, and I was able to access many of his photos, some of which had never been seen publicly before. His granddaughter had a box of them which she let me use; they were most likely the ones which ‘hadn’t quite made the grade’. Sadly, many places and people couldn’t be identified, but it was still a real treasure trove. 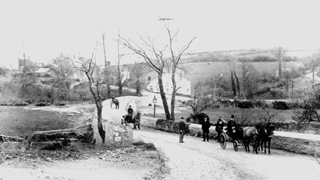 “In the 1960s, another resident, Frank Greet (no relation), recorded his reminiscences of life in the village from the 1890’s onwards and I was able to draw on his memories. That helped to provide a personal element, a narrative to support some of the ‘happenings’. I also spent many hours in various archives, researching the records of the Royal Cornwall Gazette, looking through Census returns, Kelly’s [Trade Directory] and other documents. Of course, there were many, many local people who helped by lending me photos and other material and sharing their stories. Several local names appear in the book, of course, although in some cases I have chosen to anonymise reports and anecdotes, for example where there remains some sensitivity about actions or events.

“Although the book was some 15 years in the making, if you count the time from the first glimmerings of interest, it was nearer 25 years. I now feel more of a sense of urgency as I become increasingly aware that, as each day goes by, more memories are lost and more stories remain untold. When I started my research there were still people around who remembered or had second hand knowledge of what had happened in the period covered by the book.”

Having access to so much interesting, often unique, material, Frank was keen to ensure he kept the interest of the reader and did not overburden them with a list of dry facts. He credits his wife, Sue, with helping to make sure the final text was tightly edited.

Amazingly, he had never written anything before, but his detailed research and a keen eye for what makes interesting reading resulted in a fascinating, human interest story. Additionally, the incredible changes which took place in the social fabric and history of Tregony and other villages and towns reflect what happened across the country over the period, and thus broaden the book’s appeal and its relevance to readers.

Frank says “My initial aim was to cover my costs, but having recouped the printing costs, the profits are now going to local churches. Of course, the book’s of interest to Tregony families and residents, those who I really thought of as my likely target audience, but what has also been rewarding has been the interest from overseas, Canada and South Africa in particular. Of course, in terms of research and writing, nothing beats the wonderful feeling of opening a parcel and seeing the very first copy of your own book!”

And what is he working on now? Following in the footsteps of his father and grandfather, Frank joined the police force in Cornwall and, as well as mulling over a possible sequel to ‘Tregony Happenings’, he is researching material for a potential book on the history of the police on The Roseland and the rest of Cornwall. “I’m particularly interested in the closure of police stations and the loss of police houses in those areas, so I’m keen to access material relating to that.”

By way of illustration, Frank showed me examples of the sort of thing he’s always on the lookout for – recently he discovered a newspaper clipping describing a couple’s 60th wedding anniversary celebrations. Nothing too exciting there? It was a couple whose wedding photo appears in ‘Tregony Happenings’!

To sum up, I had a really enjoyable afternoon, so buy the book, make yourself a hot drink, sit down, feet up, start reading…you’ll get a flavour of it! And then look through those boxes of papers and photos you can’t bear to throw away…

Now, a plea for information: Frank has asked Roseland Online readers to contact him if they have photos, diaries or other material about the police in Cornwall or about Tregony (particularly relating to the period 1920 to 2000). He would love to borrow suitable material to assist in his research and in the production of his next book(s). As he says:

“Over the years, people from Tregony and round about have emigrated to places across the world. Imagine the number of letters, photos and newspaper clippings that must have passed to and from home. That’s the sort material I’m keen to see; even simple snapshots and anecdotes can help to tell a story and complete a jigsaw.” You can contact Frank direct on info@tregoneyhistory.co.uk or email me at Roseland online or at sallie_eden@yahoo.co.uk. Please help; you could be part of history!