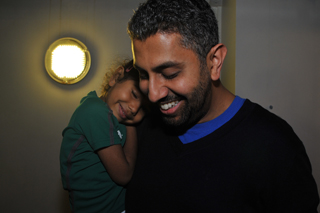 Some interviews are more fun than others, some are more interesting (or less so), some are …well, you get the picture. This one was pure pleasure, partly because, despite the unfamiliar location and the early hour at which it took place, I had access to espresso. More importantly, Vinay and I had a lot more in common than just books.

I’m indebted to Mensa for bringing to my attention his book “Polly and Pals Put on a Talent Show”. Last month’s magazine included an article entitled “Helping girls see they are as talented as boys”. No surprise that it caught my eye.

The focus was new writer, Vinay Nair, who has written his first, as yet unpublished, book for small children.

He explained that, “having a young child, I soon became aware of the stereotypes about girls (and boys) in books, particularly those written for young children. To try and combat some of that I created a story showing that girls can do anything they set their minds to. It’s aimed at children in the 1 to 3 or 4 year old age range – a book for parents to read to them.” He says “it was an instant hit with my own daughter who’s now four years old and a fan of Frozen, Peter Rabbit and anything by Julia Donaldson”. 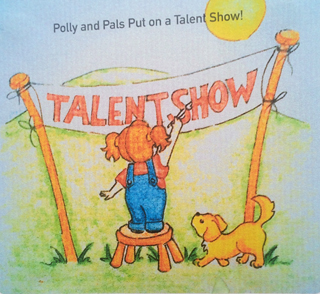 Having lived in India, Ireland, Canada and the UK and coming from a family of strong and accomplished women, Vinay said “I’m keen to get my message across, not just to children but also to open the eyes of parents who perhaps wouldn’t necessarily challenge traditional paths and stories”.

One of the aims is to produce a more relevant alternative for parents who rely on long established and familiar stories like Cinderella and Sleeping Beauty. That’s not to say those stories are no longer worth reading, but, as he says, “they do perhaps reinforce stereotypes and the search for a Prince Charming which doesn’t reflect life in in the 21st century”. He quotes recent high profile statements by everyone from the UN to actor, Emma Watson, and, increasingly, characters in the newer Disney films and books, all of which aim to counter, or have the effect of countering, gender based stereotypes.

Vinay told me that “producing this little book is very different from what I do for a living, working in the field of financial exclusion, supporting social enterprises like industrial and provident societies and other community ventures, guiding voluntary organisations towards pump-priming finance and grants”, the sort of body which is the lifeblood of many rural and other communities.

That was another area of common interest, since I was at one time the regulator of such societies, so we had a great deal to talk about of mutual interest – reading, libraries, benefit of the community bodies and cooperatives and, of course many of the sort of initiatives our own Mark Hatwood is heavily involved in and keen to promote. Although Vinay’s day job seems at first glance to be very different to his writing, he explains that “the aim of both is to have a positive social impact”.

Back on topic, he explained that the book, currently in prototype form, has as its main character Polly (from the name you’ll guess she’s a girl) and, he says that “the story draws on the interaction between boys and girls. Polly is like my daughter and she can throw a ball as well as anyone. It was seeing her behaviour and listening to what she said that prompted me to put pen to paper.”

As to the plea for advice, Vinay explained that “I really want support to find and develop my market – children who can’t yet read but appreciate a fun story, parents who enjoy reading to their children, all with a message which will last a lifetime”

Although the current handwritten version isn’t necessarily how the published book will look, I found it appealing; I hope the finished product will look very similar and thus a little different from the norm. It might make families feel it is not just a story but more of a personal experience journal.

The simple but clever illustrations were produced by a friend – Anna Rickman. The pop-up/lift –the-flap layout, coupled with the use of handwriting rather than standard typeface, creates a delightfully homely feel just right for a bedtime story. As a lifelong and enthusiastic reader, I agreed with Vinay that “it’s important to get clear messages out early, whether that’s about gender equality, the use of libraries or the importance of caring for the environment”. And it should be done in an enjoyable way. 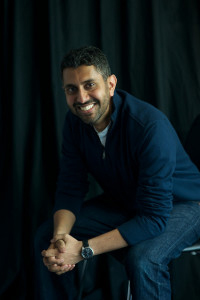 Publishing is very competitive – almost a closed shop if you haven’t been published before and/or haven’t got an agent. In the heading I mention that Vinay is looking for help. So, what can you do?

He says “I’ve tried googling every publishing related key word and organisation I can think of, calling agents, thought about self-publishing and canvassed everyone I know for ideas. The result has been lots of praise from friends, particularly those with children of the age range at which the book is targeted, but few “leads”’.

That’s where you come in. Have you written a book? Had it published? Started with a blog? Got contacts? Great ideas? What worked? Didn’t work?

Please get in touch. You can contact Vinay on vinay@nair.com or email me at sallie_eden@yahoo.co.uk.

Just think, you could be involved in the start of a successful writing career which might one day rival the wonderful Judith Kerr (my words, not Vinay’s; he’s too modest!)

Finally, thanks in advance and if you’re in the midst of writing something, remember, as Vinay’s book says ‘they can do it, so I can do it’.