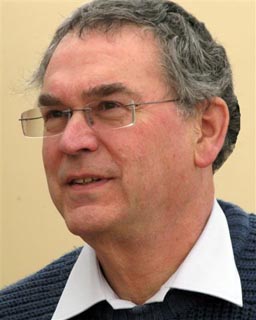 Tony Mansell, author of ‘Marching To A Different Drum’

Born in Redruth to parents from Fowey and Truro, Tony is Cornish through and through, having traced his family back to [so far] the start of the 17th century. Now living in St Agnes where he is fully occupied with interests as varied as Cornish history, Brass bands (he is an ex-player), golf, rugby and photography, he is also President of St Agnes Old Cornwall Society and was very honoured to be made a Cornish Bard in 2011, something he takes very seriously. Not surprisingly he describes himself as a “passionate Cornishman but with many friends from beyond the Tamar”.

He trained as a building surveyor, ran his own company and was involved in business support. Married with two children and six grandchildren, he has “a keen, if slightly warped, sense of humour” – his words.

I started by asking him to tell me about his latest book and what prompted him to write it.
“The Civil War has been a passion of mine for 30 years or more, particularly when viewed from a Cornish perspective. It was to be my third book but ended up being the thirteenth. Other things seemed to get in the way. I planned it as a non-fiction book but I couldn’t find a new angle so I decided to write it as an historical novel. I began collecting my thoughts and writing about four or five years ago but, as I said, things just seemed to get in the way.”

“My research stretches back many years and I have read and cross-referenced every book I could find about Cornwall and the Civil War. I was adamant it should be historically correct, given my ‘soapbox belief’ that writers should not interfere with history. I am appalled at stories like ‘Braveheart’ which gives a completely false picture of William Wallace. I greatly admire Daphne Du Maurier [a friend of his mother] but even she was guilty of distortion.”

As well as writing and his numerous hobbies and interests, Tony reads memoirs and attends courses and lectures to ensure accuracy in his writing as well as satisfying his curiosity. He enjoys books by Dan Brown and, on the non-fiction front, work by Professor Mark Stoyle, of Southampton University.

I asked him about his own target audience.

“‘Marching To A Different Drum’ was written for an adult audience and was intended to provide a good read as well as a factual history. I have written a number of articles on the subject and I also provide audio/visual talks .”

As to the future, Tony has no shortage of ideas, saying “the number of potential stories in my head exceeds my available time. I work in my office, with just my computer and the telephone for company. At an appropriate stage I share my work with fellow writers. With this book, I read out loud selected extracts at the writers’ group I was attending. Their reaction was positive, but people are generally too nice.”

Unlike many authors, he hadn’t always wanted to be a writer. He says “I began writing as therapy following a severe and long bout of depression in 2001. It just grew from there and a friend now calls it a hobby out of control.”

Proof of that statement comes from the fact Tony is currently working on a history of Perranporth Golf Club and an anthology of supernatural stories; he has been asked to write a book about a well-known engineering company. And, no surprise this…. he is planning to write the sequel to ‘Marching to a Different Drum’. In his spare time? He’d love to write music.

‘Marching to A Different Drum’ is reviewed this month.