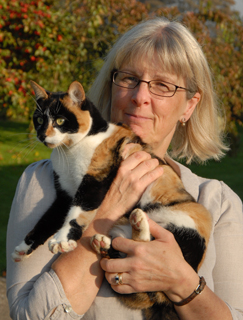 Carol Tetlow has just published her latest novel, ‘Best served cold’. As well as being a writer, she’s a GP in Harrogate and, for what she describes as “ten fabulous years”, she has lived about 20 miles north of there, on the edge of the Yorkshire Dales.

Her life sounds as though it could be a modern version of ‘My family and other animals’. It consists of “eleven donkeys, two dogs, two cats, one pony and just the one husband”.

I asked Carol to tell me more about her life and writing.

“Work is hard and requires total concentration, but for the last few year I have been part time, which has helped restore some much needed work-life balance. The donkeys are a big part of my life. We show them at local agricultural shows and one of them is a star at carriage driving. Little does the pony realise that he too, will be introduced to the trap this spring and will be expected to do as well.”

Carol is too modest to say so, but my sources tell me that Fergus, aka Prospect House Prospero, is a highly decorated animal, being (I think) one of only two donkeys to achieve a double win of both in-hand and driving championships.

“I think I’ve always wanted to write. I wrote a novel about children and their ponies when I was fourteen and it’s still in a drawer somewhere, but studying took over and it was a long time before I came back to writing. Looking back to 2006, the point I really started writing, it was on a course for work; someone asked a question which nobody wanted to answer, but I thought it was a brilliant idea for a novel. I believed that I had the plot sorted out in my head, but as the characters developed, it became clear that they would behave differently and so the story evolved in a way that I hadn’t originally intended. This experience was totally unexpected and enlightening and I think has happened with all my novels. It still makes the hair on the back of my neck stand up to think about it.” 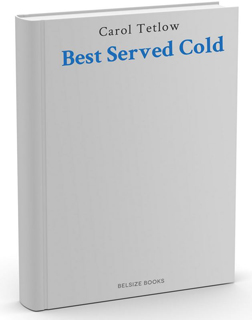 “I have a small, select and trusted gang of people who read my work before anyone else –my sister, my best friend and her mother. I know they’ll be honest with me and they are all different ages as well, which I think is important. I suppose my main target audience is adult women but I’ve had some favourable reviews from male friends as well –not just because they’re friends either!”

“Currently, I am half doctor/half author. For three or four days a week, my work as a GP is all consuming, but it provides ideas for stories and characters. General practice is a unique profession where I am privileged to be included in lives, from cradle to grave, through the good times and bad. On my days off, I metamorphose into author. Writing is a wonderful way to relax and forget about the stress of work. My husband assures me that I’m a nicer person to live with when I’m writing!!! My favourite place to write is the kitchen table, on my laptop. I love it in there. In the corner of the kitchen there is an L shaped sofa and the two Labradors are usually draped across it, snoring contentedly. From the window I can see the donkeys and pony in the paddock. Lots of my ideas come when I’m walking the dogs or mucking out the stables.”

Tell me more about your novels.

“To anyone wanting to write a novel, or already in the process of doing so, I have two paramount pieces of advice. Neither is original but I have found them to be true, so I make no apology for repeating them. One, write about something you know and two, never, ever give up hope. If you truly believe in your work, keep trying.”

“My first four novels were a series about a doctors’ surgery, the protagonist in each one being a different doctor. I was fortunate to be signed up by an agent, who sadly gave up shortly afterwards. For a time I felt very alone and unsupported. Not to be defeated, I decided to keep writing and I was lucky enough to find a new agent, George Wilson of Kilburn Literary Agency. He published both ‘Hidden Agendas’ and my newest novel, ‘Best Served Cold’, both on Kindle. I’m hopeful that he will look at the original series too. Currently he’s negotiating with publishers on my behalf.”

“On average a book takes about a year. I have been much stricter with myself recently and when I sit down to write, I have a goal of 1000 words a day. Sometimes that’s easy and double that’s achieved, maybe more. On other days it’s like wading through mud in high heels, but it still has to be done – it can always be erased the next day (it often is!). ‘Best Served Cold’ took just over six months and ideas for the next novel are starting to evolve already. I love it when I start to plan, even though I know it will probably change many times before I’m completely happy.”

And what about books generally? What do you like to read? 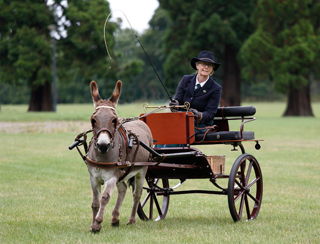 “I love to read – I always have. I can remember my mother telling me that she didn’t mind what I read, so long as I read. I like good stories with believable characters that I can relate to and I hope that’s what my novels provide. I really believe there’s a niche for novels with a medical background – after all the public love medical TV dramas!”

“The world is changing and although my biggest desire is to be able to hold my books and put them on a shelf, it’s obvious that traditional publishing is changing too. Personally, I’d much rather hold a book and turn the pages, but e-books are here and moving with the times is unavoidable, although I would hate to think that they would result in the extinction of paper.”

“Finally, I must just say how much I love Cornwall; when I was a medical student, I had an unforgettable holiday there, staying in a tiny cottage on the cliffs not far from Fowey, where we have friends now. I have the best memories of sunshine from dawn ‘til dusk, eating rice krispies* with chopped banana for breakfast, sitting outside and simply gazing at the stunning panoramas.”

I will be reviewing one or more of Carol’s books over the coming months.

*No accounting for taste!