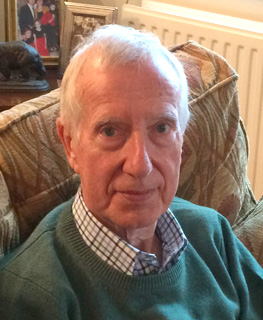 When I met Peter for coffee at The Tresanton recently it wasn’t so much an interview with an author, more of a delightful chat with an old friend.

Born in Staffordshire and now living in Gorran Haven, via long spells in Kent and Hampshire, Peter was formerly a Dental Surgeon, a career which left little time for writing. It wasn’t until he took early retirement, that he had the time and opportunity to write, something he’d always had a desire to do.

Over the past 12 years he has written nine novels set in Cornwall in the 18th century. They focus on the Treveague family and it was after reading ‘The Silent Bell’, the first in the saga, that I contacted him. The second, ‘A Cry from Within’ has also been published, with the others set to follow.

Publication is timely, given the current revival of interest in ‘Poldark’, however, as he explained, “a Cornish family saga wasn’t always the route I intended to take for my debut novel, but having read Carol Blake’s book, ‘From Pitch to Publication: Everything You Need to Know to Get Your Novel Published’, I discovered that ’writing about what you know’ wasn’t really going to work, as books about dental surgeons and dentistry are never likely to be that attractive.”

However, his career choice gave him one big advantage: the number and range of people he encountered on a daily basis.

“I had already become very interested in Cornish history and heritage, so when I realised I might have to go back to square one for inspiration that was the obvious choice. I settled on the period starting in the 1770s, a time of change in the mining industry, partly the result of competition from mines in Anglesey. It was also the time when smuggling was in disarray because of a general increase in shipping. I knew that I wanted to write a good story people could get involved in and I decided the best way to ‘start a history’ was to place my main character at rock bottom, so John has no money, no home and no job; he also has responsibility for his three sisters.

“Of course, I had to find a way to make it credible. I realised that John would need to be young if I was to follow through his life in a convincing way. I settled on the age of 18, as being a time when he would already have lived a third of his life, but which would still allow him to achieve something over a realistic timeframe. He had to be in a positon to make something of himself so, again, I had to find a way of making his story a believable one. I decided that his Mother would have been a governess, seduced by someone of a higher class. But for all my preparations, it was still all too easy to box myself into a corner and at certain points writers need to find their way out of what appears to be a dead end, otherwise the story is going to finish prematurely and in a way which isn’t very satisfying to the reader.”

“I brought into the saga a number of things from my own life and experiences so, for example, my middle name is John, so I gave that name to the main character. Other names – for places and people – come from a house I lived in, signposts I’ve noticed on the road from St Austell to Truro and so on.”

How do you prefer to write?

“Well, I wrote my first book on a computer but it was never going to be a marriage made in heaven, so now I write in longhand and then type it.” Having seen one of Peter’s notebooks, I can confirm he does indeed write that way, in small, neat handwriting. His wife is very involved, doing what he describes as “the clever stuff for Kindle”. She is also responsible for the covers and, if pressed, provides a very honest critique.

How long does it take to produce the finished product? “Well, I spend a huge amount of time thinking and I might be working on bits of different books simultaneously. It then takes about six weeks to type up a book, but, as I said, I prefer to write in a notebook. It means you can scribble anywhere. I have a favourite type of notebook too, preferably A5 size, ones where you can move pages around and reorder them. I leave blank pages so I can add notes when something strikes me.”

Where do you get your inspiration? “From reading, walks in the countryside, people, even, once, a station announcement.”

“As well as writing I want to inspire people to write. You don’t have to know where the story’s going when you start and, although the publishers I approached were very encouraging most will take only a couple of new authors or books a year, so you need to think through what you’re going to do when you’ve finished writing, but, if you want to write, think about it, by all means, but do it!”

And when you aren’t reading or writing? “My other interests include wood carving and wood sculpture, and walking in the east Roseland area of Cornwall, which is the setting for the Treveague series.

What now? What next? “I’ve written a two part novel set in the 2005 and beyond, about the devastating effects on the life of a couple when one becomes a victim in the 7/7 bombings and how her subsequent injuries affect their lives and relationship and how the struggle for normality works out.” We spent some time talking about the plot and, not wishing to spoil it for potential readers, I will just say it had me absolutely hooked.

And what do you like to read? “Peter May, Howard Spring and HE Bates are all favourites and have influenced my writing in one way or another. I enjoy Bates, for example, because he liked people for their faults. And as a child I loved Treasure Island and it was that and other books around at the time which really got me interested in reading.”

Veering slightly off topic, we discussed Harper Lee; a second book or not? Better to stick with being known for having written a masterpiece or risk the publication of a follow up to ‘To Kill a Mockingbird’, possibly a second masterpiece or maybe destined to be a disappointment. The jury’s still out.

Returning to his own work I asked Peter how he would like people to describe his books. “I want people to enjoy them, to feel involved. I don’t want them to think there’s anything gratuitous or that there’s loads of padding.”

After discussing what we both love about reading, we agreed it’s time for a return to the joy of the ‘rattling good yarn’, books written for readers to get involved in, not necessarily overly intellectual or works of art just well plotted and enjoyable. If you’re enjoying Poldark and you like well written books (no rogue apostrophes or poor spelling in Peter’s work!), you might just have found something for those Cornish days and nights when we ‘get a lot of weather’.

Peter’s books are available via Kindle and locally, in Gorran. For further details, email me at sallie_eden@yahoo.co.uk