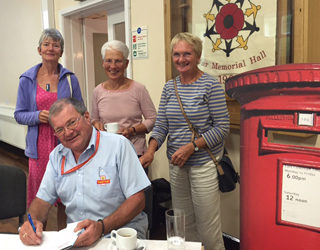 Many of you will have read the newly published book, ‘Don’t Worry He Doesn’t Bite’ or helped to celebrate its launch. But, just in case you missed last month’s review on Roseland Online, here’s a quick recap: Liam Mulvin, well-known to residents and visitors to the Roseland, has penned some of his memories of 45 years as a postman, things he sees on his rounds, reminiscences of his childhood and his observations of nature.

Our interview was more like a chat with a friend; it was different in another way too. At the launch I was able to gather others’ views. Generally, all I know about an author is what they, their publishers or the internet tell me. On this occasion, though, I was able to gather first hand “references” from his neighbours, friends, customers and his Royal Mail and Coastwatch colleagues. All spoke of his commitment – to his job, his customers and his friends – and his kindness and generosity. 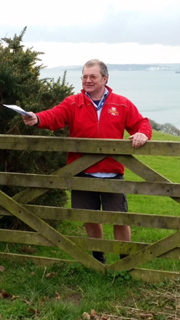 Writers are always told to ‘write about what you know’ and that’s exactly what Liam has done, so I started by asking him how he became a postman and how it’s influenced his writing.

“I first worked as a postman when I was a student, helping out with the Christmas rush in 1971. I was 17 and, from the moment I stepped into the village post office on a cold wet December day, I knew I’d found my vocation. There is something very special about delivering people’s letters, a job that has existed for thousands of years in various forms.”

“As a postman I’m providing a service and I want it to be the best it can be. My job is much more than the delivery of mail. No matter the weather, the time or the distance, doing my job well gives me great pleasure.There are few jobs where you can help people while still doing your work. The letters I deliver can enrich someone’s life and being part of that enriches mine too. As well as delivering mail I find myself making sure empty properties are secure, chatting to the elderly and the lonely, or throwing a ball for a dog. Every day I dip into other people’s lives. I share their birthdays and Christmases, their pride when they or their family do well, their delight at the birth of a baby, even the sorrow when a loved one is lost.” 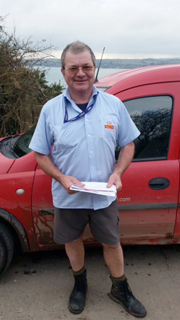 “In this world of digital communications, many people still love receiving personal letters. I don’t build wonderful buildings or save lives, I don’t lead soldiers or save people’s souls but I do act as a bridge between people; and it’s a privilege only a few can share. The people and things I see on my rounds have given me a great deal of pleasure. I have tried to write about it. I hope that comes across.”

What do you enjoy reading?

“I’ve always been surrounded by books, although my family weren’t readers. At school I enjoyed English and History but was less keen on other subjects. I joined the library, aged 8, and was keen to work in the school library but that was a role reserved for girls!”

“I love Miss Read’s books and return to them often; they have long been a favourite. I think it’s something about an England that, for many people, no longer exists; the postman coming to the door, people chatting as they go about their daily lives. And I think that sort of writing is especially popular with people who miss the countryside or those who want to feel part of it.”

“I also enjoy memoirs, anything historical, particularly English history, I’m starting to get into thrillers and I’ve been very impressed by the increasing quality of young adult fiction. I like a story with a beginning, middle and an ending, where justice is served. I want to know what happens, not be left unsure of the outcome.”

How and when did you start writing? 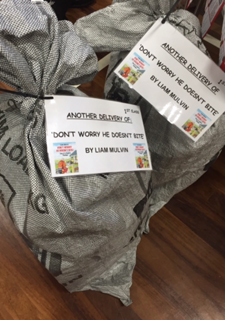 “I started writing stories when I was about 14, a time when I was ‘reading for Britain’! Of course, work got in the way for a while. Later, I made up stories for my daughters and, as they were growing up I realised that, although they studied history, to them the 1950s seemed like the ‘olden days’, things like having a tin bath in front of the fire. Things that were normal to my generation were as alien as Roman times and I wanted to share that period of time through story-telling.”

“One of the pieces of writing I felt made a difference was based on my experience of losing my sister when I was 8 years old. At the time, it was thought that children should be sheltered from death. My daughter was studying Humanities and I wrote a story in the form of a letter in which I explained what happened. The teacher asked if it could be used as the basis for future lessons. I guess you could say that was my first writing other than for my family.”

“Encouraged by my wife, Linda, who deserves a special mention for her support and organisation skills, I did a creative writing course about 15 years ago. I found I had a talent and had a few short stories and memoirs published. Then I won a couple of writing awards including an Arts Festival competition. I’ve had work published in a few anthologies but this is my first book.”

What brought you to Cornwall? 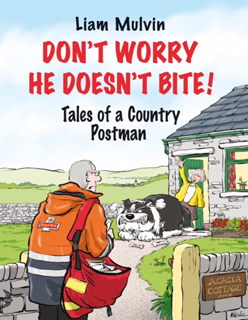 “All my life I’ve wanted to live and work at the seaside. We moved to Cornwall six years ago after walking the SW Coastal Path for eight weeks. I finished work in July and by September we had moved. When we were walking the Coastal Path we had noticed the Coastwatch stations and got chatting talked about what they do. It sounded interesting and when we settled in we more got involved.”

“I couldn’t find a suitable local writing group but approached the Western Morning News to see if they’d be interested in some of my pieces for the Country Notebook section. I had stockpiled a few stories and some are included in his book. All my stories are based on fact, sometimes a little bit embellished but still recognisable. It’s important to look for humour, especially at times when news is bleak and there’s so much nastiness in books and films. I want things to be nicer in the world.”

“Workwise my aim is to complete 50 years with Royal Mail. I enjoy the camaraderie of being slightly out of step, starting work at 4am. Of course, I’m ready for bed at 9pm! Why do I do it? My role isn’t just delivering the post; it’s about keeping and holding people and communities together. It gives me pleasure when children write to Father Christmas; nowadays of course, he is more organised but I still need to ensure he gets all the messages and cards sent to him.”

“I connect people and I know how much pleasure they feel knowing that someone has made the effort to buy a card and a stamp, write a message and post it. Sometimes I can share in that pleasure. At other times I can offer sympathy when people receive bad news.”

“I think I’ll always write because of the places I see and the people I meet. I’m currently working on my next book which will focus more on my life with the Royal Mail. I’ve got a couple of other things in the pipeline too, including maybe a Christmas book.”

And finally, a confession: it‘s the first time something I’ve said has moved an author to tears. What did I say? Without knowing she is one of his favourite authors, I mentioned to Liam that his writing and the subject matter very much reminded me of Miss Read (particularly the Fairacre Chronicles). For those of you who aren’t familiar with her books, Miss Read (aka Dora Saint) wrote gentle stories of life in a village. Many were taken from her own life as a village schoolteacher. Frequently, very little happened, but her powers of observation, just like Liam’s, made even the smallest event or creature worthy of note. Liam told me “it was the most wonderful compliment that anyone could have made about my writing, that my powers of observation were similar to Mrs Saint’s”.