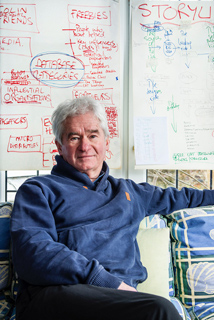 This month, our book reviewer, Sallie Eden, talks to Colin Hastings, whose ‘Carbon Buddy Manual’ is reviewed this month on her Book Review pages.

First, a bit of background: Colin and his wife, Helen, have had links with Cornwall for over 40 years, 23 of which have been on the Roseland. For the last 13 years they have lived near Portscatho.

involved in local environmental issues, first as Deputy Chairman of the Roseland Neighbourhood Development Plan, and then as Communications Coordinator for Wild Roseland, as well as starting up Roseland Pop In for Ping Pong, with the help of the Roseland Surgeries Patients’ Group.

When I wrote my review, I hadn’t looked at the website or been involved with the launch so, as I carried out this socially distanced interview, it was interesting to note how closely my impression of the manual matched what Colin aims to achieve.

I started by asking him how The Carbon Buddy Project came about. He explained that  “anyone who has visited us or been in contact with us recently will know that I’ve been busy with a climate change project. Momentum increased last April, when I had an idea about how to get more people trying to reduce their carbon footprints. It took on a life of its own and grew into a book, or more accurately a manual, and a related website. It was a natural, but somewhat unexpected, development from our own experience of trying to reduce our carbon footprint, and it turned into pretty much a full-time (unpaid!) commitment.”

At a time when he was seeking to improve his knowledge of the issue, Colin came across what he refers to as some ‘terrible academic books’ which made him realise why many people were alienated or overwhelmed, they didn’t know where to start; it was too complicated and there was too much disagreement.

“As an organisational psychologist, I recognised that, for individuals there are a number of barriers to action. The biggest hurdles are behavioural and psychological. If you can’t or don’t see what you can do to tackle such a huge problem, you give up. The practical and the financial barriers, like saving on heating costs, are clear, but there are other barriers too. So much of the information and science about climate change is just too technical and complex.

“Also, there is insufficient impetus to encourage people to change their behaviour and consumption. The changes that people are making are not happening fast enough. That’s why I wrote ‘The Carbon Buddy Manual’. It’s designed to help anybody and everybody to take practical action to reduce greenhouse gas emissions. The clue is in the title; the approach is built around the idea of ‘Carbon Buddies’. My premise is that it’s more easily done if you’re not doing it on your own. To that end, it’s as much an organisational psychology book as a climate change book. 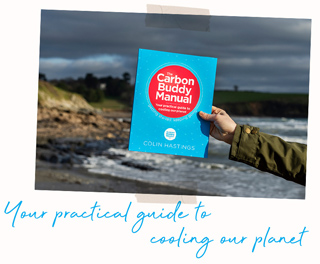 “I knew that Street protest was not for me, but I wanted to leave a positive legacy and a viable future for the next generation. Over the years, there were several triggers, including my son’s graduation from Falmouth University and the birth of my first grandson, both of which made me think about the future. It was also my grandson who gave me the idea for the term ‘Carbon Buddy’. I wasn’t attracted by the word ‘Granddad’ so I was pleased when Toby (then aged three) announced he was going to call me ‘Buddy’. My grandchildren continue to be one of my main motivations.

“But if I was going to have an impact I needed to find a way of achieving exponential growth within a very short time. I needed to reach thousands of people, maybe millions. That may sound ambitious, but it’s important and it’s urgent, so quite early on my aim was to be in direct contact with 500 people. I calculated that if each of them then passed on a positive message to 20 other people, the project could start with a supporter base of 10,000 people. I calculated that after the formal launch of the manual, aided by a social media campaign, that could grow to 100,000, eventually achieving critical mass, as more people shared ideas and enthusiasm.”

“A presentation to my Italian conversation class helped me to focus on explaining in clear and simple terms what I’d been doing and I came away thinking I was heading in the right direction, so I drafted something longer in English for those people like me who felt stuck. Other inspirations included cookery books and gardening manuals which adopted a step-by-step approach, without using jargon and lots of technical terms. I was determined that the book should be aimed at individuals and would be readable, practical, structured, simple, direct and friendly, covering lots of themes, broken down into bite-size chunks.

“I took advice from publisher friends and submitted proposals direct to publishers. I got three responses who each said it was a great idea, but that their climate change lists were full for the next three years. So I decided that I wouldn’t write a book, instead I would write a step-by-step manual that was simple, but not simplistic. I decided to self-publish in order to meet the requirement for urgency and, to meet the cost, I used some of the funds which Helen and I had set aside for charitable giving.

“Thanks to the team who helped to bring it all together, all but one of whom are based in Cornwall, the manual was published in February, with the parallel website launched in March alongside that was a marketing program using social media.”

“Before the book, I realised that one of the problems is that our carbon footprint is largely invisible to most people, so I decided that the key was just to start talking to people, trying to engage them. But this isn’t just a job for me, it’s for everyone, so join me and others on the Carbon Buddy Project Facebook page @carbonbuddyproject, check out the website www.carbonbuddyproject.org which complements the manual by providing deeper and more focused information and, of course, buy the manual.”

“Most important of all, if you have an idea, share it and of course, talk to people!”