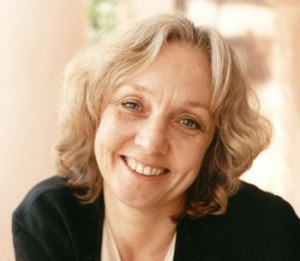 This month, Sallie Eden, interviews Anne Fine, prize-winning author of over 40 books including several of Sallie’s own all-time top 100 books (let’s hear it for Tuffy the Killer Cat!)

I can’t believe there’s anyone who hasn’t read and loved at least one of Anne’s books, but on the off chance you haven’t, let me remind you that she was Children’s Laureate from 2001 to 2003, winner of the Carnegie Medal in both 1989 and 1992, the Whitbread Award in 1993 and 1996 and the Guardian Fiction Award 1990. In 2003 she became a Fellow of the Royal Society of Literature and was awarded an OBE. And, of course, she wrote ‘Madame Doubtfire’ which inspired the highly successful film ‘Mrs Doubtfire’.

I started by asking Anne whether she always wanted to write for children. She says “I never expected to be a writer. I simply was – and am – a passionate reader. But one winter in the 1970s, with a baby in a pram and no gritting on the steep pavements in Edinburgh, I couldn’t get to the library. Mad with frustration, I sat at the kitchen table and started writing. The book (now entitled ‘On the Summerhouse Steps’) just poured out. Purely by chance it was pitched at readers of ten years or so upwards. It was a couple of years before I entered it for a prize. It was the runner up and one of the judging panel passed it to an agent, who found me a publisher. After that, I never stopped writing, though nothing ever was written as easily and painlessly as that first book.”

“After I divorced, I was bleating to my agent about how little money I earned. He said, ‘If you want to make money, you must write for younger children.’ I think the assumption then was that older children were sent to the library for the books they wanted, but younger children were bought books by their parents. My first book for younger children was ‘Bill’s New Frock’, a comedy about gender stereotyping in the average British primary school, and it was a huge success. It still is a staple of primary school reading, though as a feminist I would personally rather have hoped it would be out of date – and out of print – by now.” I know what she means, but, for me, it’s still such a great book, I’d be sad to see it go.

In 1986 Anne started writing for adults, as she says, “when I suddenly wanted to write about the nature of passion. ‘The Killjoy’ was clearly not a book for children. I write an adult book about every four years or so. I don’t prefer one sort of writing over the other. It’s more a question of ‘Who will enjoy this topic most?’ and then I write for that age group, whichever it happens to be.”

I wondered if Anne needs a trigger to start writing and how long it takes to ‘percolate’.

“It’s hard to say.  Sometimes the topic has interested me for a while. Sometimes I want to explore how I would feel in certain circumstances. The old, ‘What if…?  For example, with the adult novel, ‘Fly in the Ointment’, I drew on the experiences of a friend who moved house to be nearer her grandchild and I thought, how far would I go if I found myself really worrying about a grandchild? And off the novel went.”

“I’m no good at thinking ahead….I couldn’t play chess to save my life. So I start with a situation, and then go from there. I don’t do a rough draft. I write the book from start to finish, correcting as I go, letting each sentence and page depend on the one before. I’ll print out as I go along, and end up with a ring file where the first third could almost go to the printers, the second third is still being worked on over and over, often in pencil on trains, and the last third is less than a twinkle in my eye.”

I wondered how often Anne is recognised and, given the nature of the majority of her books, whether people expect her to be instantly amusing.

“I’m never recognised in the street, except in my small home town. I think authors rarely are, except when they make a point of looking distinctive. But the name on my credit card is often recognised in bookshops, which is extremely cheering. I do write comedies, and many of the interchanges in my novels are witty enough for people to expect me to be a good deal quicker off the mark verbally than I am. But most of my jokes are stolen from the man I live with, Richard, who is very funny indeed. I sometimes reckon I am the world’s most thrifty recycler of his jokes.”

“I need peace and quiet to write. I don’t mind traffic, but I can’t concentrate against music or voices. On trains I put in earphones and have white noise (the sound of crashing surf) on a long loop, then I can read and work. I never work if I’m tired, and that’s no problem because my work is now in over forty languages, so there’s a tremendous amount of office work to do when I’m not up for getting on with my own stuff.”

I was surprised to learn that Anne never signs a contract until she’s at the end of a book, just in case there’s a family problem, or she gets ‘stuck’. She tells me it means she doesn’t have to panic. “I can just take my time to get things right. I’ve never understood how people can bear to publish a piece of work that isn’t the best that they can do. Some things take far more time than you would ever imagine. I’d absolutely hate to look at something in print and think, ‘It could have been better if I’d had more time.’”

And the authors she admires and enjoys? “I’m fascinated by families- how they work, how emotions refract from one member to another. So my favourite authors are people like Rebecca West and Elizabeth Taylor, who meet these issues head on. It’s not a female prerogative either. Just look at Henry James and Ford Madox Ford. Anyone who knows, and can put over, how people tick.”

And what is she planning next?

“’Blood Family’ is just out. I became fascinated by how a child goes through placement and adoption after a horrible start in life. And how well-meaning professionals can put so much effort into a child, even though some of the guidelines actually make life more difficult all round. But next is a series of short stories about children who are schooled away from home. Not just boarding schools, but all the different sorts of children I’ve seen in my professional life over the last twenty years – children in schools for the blind, children in secure units, children with music scholarships.  All of them always seemed to say, ‘Why don’t you write a book about people like us?’ And now I have.”

As to Anne, the person, not just the writer: “I look back to my twenties and I can’t believe how different I am now I’m in my sixties. I have two grown up daughters and seven grandchildren (including steps). I live in a very small, quiet town in County Durham which doesn’t even have a rail station or a cinema. I walk my Bernese Mountain dog Lulu. I read for hours every day. My partner Richard is an orchid specialist who likes to garden and cook (lucky me!) and I am as happy as I can be.”

If you would like a list of Anne’s books (and/or my comments on the many I have read) please email me at Roseland online. Adults – don’t ignore Anne’s books for children. They are well written, cleverly plotted, and often very funny; many of them deal with difficult issues in a sensitive way.

And now a ‘public service message’: Anne Fine is part of a campaign to persuade local councils not to cut library services. We both agree that they are more than places to borrow books. They are social hubs, places to access IT services and sources of information.  Support your library now!