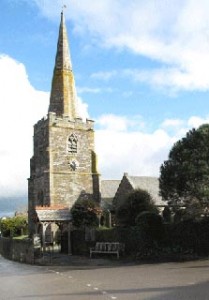 Some years ago, it was decided that the church needed a choir vestry, a meeting room, a refectory/community room and toilet facilities. This became our Millennium Project, the building of which began in May 2002. Most of these changes may be found behind the lovely new oak doors, the exception being the Font which was moved from the left of the inside entrance door to its present, more central position, and it is generally acknowledged that it adds much to the Baptism Service when the congregation can see and be part of the proceedings. The Font is a relic of the Norman Church that once stood here. The remains of the fitting to house the cover can still be seen. It is known that a replacement cover of traditional Cornish form was made, but has since been removed.

Where the font formerly stood, now part of the choir vestry, stone seating around the walls may be found – now covered in wood. These were provided in the 13th century for the elderly and infirm, the rest of the congregation stood. On the South wall, a slate tablet lists all Rectors since 1260. 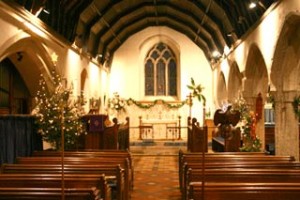 In the kitchen, through the oak doors, are two lancet windows typical of 13th century Cornish workmanship. Another may be seen beside the organ. There is also a three-lights window on the South Wall near the Lady Chapel, of the same period. The masonry is 15th century.

There are six early 16th century Bench Ends. Most have shields showing symbols of Christ’s Passion, for example scourges, crown of thorns, thirty pieces of silver, reeds and spears. One bench end, however, displays the device of Catherine of Aragon, Henry V111’s queen from 1509-1536 (illustrated). 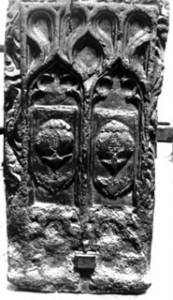 The organ is more than one hundred years old. It was originally placed where the Lady Chapel is now, and was moved to the North Transept in 1948. It is an exceptionally good instrument. It has been considerably enhanced twice in recent years and is now considered to be one of the best organs found in any small church in Cornwall. Behind the organ is an ancient tomb, said to be of a former rector.

The outer porch contains a 15th century cusp headed holy water stoup – now, alas – somewhat damaged. The carved wooden wall plates below the roof, inside and out, were removed from the old church roof after the fire of 1848.

The wheeled granite Celtic cross (illustrated), outside the South Door dates back to some time between the 6th and 10th centuries. The cross was set in its present position after the church was restored in the 19th century. It had for generations before formed part of the coping of the churchyard wall.

For further details of Services and Events please visit St Gerrans Church pages on the the United Benefice Website.