The village of Veryan is situated in the heart of the Roseland peninsula. Famed for its roundhouses, ordered built between 1815 and 1818 by the Reverend Trist – as the unlikely legend has it; to eliminate corners where the devil lurks – they are part of the village’s quiet charm.

Close by are the beaches of Carne and Pendower – which, at low tide, are accessible to each other (although not by car as some foolhardy sand-sunk drivers will confirm!). In the village itself is a pub, a hotel and restaurant and a few B&Bs as well as a village stores and post office.

This thriving community also boast a village hall and its own sports and social club which houses the tennis courts and a cricket and an indoor bowls green. In the vicinity is also a Melinsey Mill, which is open during the summer months for light snacks and the Nare Head – where an old nuclear fallout shelter in hidden – a bird sanctuary and a haunt of the peregrine falcon. The head marks the tip of Gerrans bay and overlooks Gull Rock.

Horticulturally, the village has a garden nearby and is the home of The Roseland Nurseries.

Slightly further afield are East and West Portholland; a pair of rocky coverlets about a mile to the northeast of Portloe. The villages are little more than specks along this coast and probably remain unknown to the vast majority of summer visitors to the Roseland Peninsula, but there is a fine short walk east along the southwest coast path to the sandy Porthluney Beach and the somewhat eccentrically built Caerhays Castle is in the vicinity of Veryan, too.

There is a gallery in the delightful Veryan Green and a bric-a-brac shop. 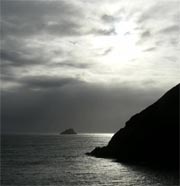 Its claim to the silver screen fame is that various scenes for the 1992 television drama series The Camomile Lawn, based on the book of the same name, were filmed there at Broom Parc House as well as the coast at nearby Portloe.

To find events and up-to-date calendar events for Veryan, visit our Calendar Pages