If The Bomb Drops! 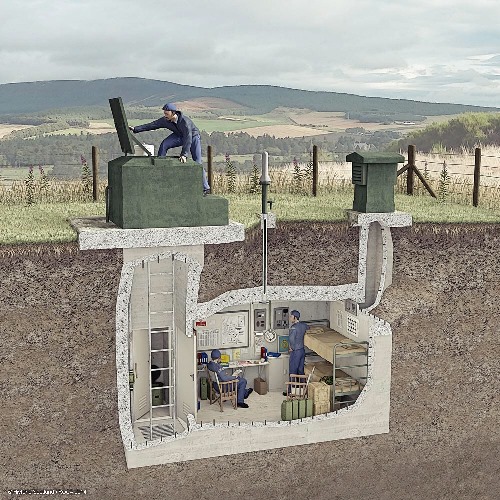 At one point in my police career I was in charge of three nuclear bunkers. This was the Cold War era and they were built all over the country as a shelter in the event of an atomic bomb attack. We have one on Nare Head and they can still be seen in many places if you know what to look for. The idea was that in the event of a nuclear war these could be occupied by members of the Observer Corps to monitor when it would be safe to come out after a nuclear strike but also to be a secure refuge for key Police, Military and Civil Government personnel.

If you happened to be within five miles of ground zero then what to do when the air cleared would not bother you. However beyond that distance, and the further you went out, it was estimated there would be increasing numbers of survivors. But for these people the world would have changed. Much of the infra structure would have been destroyed and it would be necessary to have a viable Police, Military and Government to resume some normality of life. Hence the need to ensure that a command structure should be preserved so some normality could be resumed as soon as possible.

The job of the Observer Corps was to monitor the conditions outside by means of instruments marking the decrease of radiation as it decayed. The structures were massive, huge underground chambers equipped with water, provisions, sewage and everything needed to sustain life for several weeks if necessary. The umbrella structure for personnel was the Civil Defence, of which the Police formed a major part.

Because of the isolation of many of these bunkers the Government of the day were concerned that someone might steal one, damage it or use it as a potting shed. Every Police Constabulary had to nominate someone to keep an eye on them, check their security and look for things like dampness, vermin or anything else which might make life unpleasant. Wandering around one of these, on your own, many feet underground, was an eerie experience. 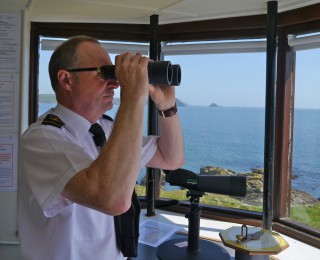 My other hat in Civil Defence was to be a Warden Instructor. For that I was sent on a course to Falfield in Gloucestershire. It has proved to be one of the most useful courses I ever attended. I never instructed a single Warden but the course included such things as radio and how to make simple repairs. The usual Police method was to drop it on the ground but this course was more sophisticated.

We learnt the correct procedure on how to use an Ordnance Survey map, identify exactly where you were, and relay that by radio to other Emergency Services. A large amount of time was spent on public speaking and lesson preparation and also how to coil a garden hose without getting a kink in it. Even that has proved useful!

To this day I remember the instructor’s phrase to get your map co-ordinates correct. It was ‘Along the Passage and up the Stairs’. I still think of that when using the charts in our Lookout though, of course, for an Admiralty Chart you reverse the sentence and go ‘Down the Stairs and Along the Passage’. I have often wondered why Naval Charts and Ordnance Survey should be opposite.

They are, after all, both Government map making departments. But that does not matter – the importance of getting it right is paramount. Only by pinpointing the position of a casualty on a chart can a lifeboat or helicopter go straight to the right place. A few seconds delay in searching around might be the difference between life and death. Once a swimmer in the water goes beneath the surface his time on this mortal coil is limited. This is why we spend so much training time estimating as near as possible the casualty’s position and why we have all passed the Radio Operator’s Course which teaches how to pass the information on.

Like every Emergency Service we are subject to an annual inspection to test our efficiency. They don’t quite put it like that but that is what it amounts to. They call it ‘Renewing our Declared Facility Status’. Our Declared Facility Status means that we are recognised as an efficient branch of the Emergency Services in respect of use of radio, chart work and plotting, observation etc – in fact everything we do in the Lookout.

We are, however, all adults, including the tester, so it is conducted in a friendly and constructive way. It can be searching and not much is missed, but allowances are always made for’ first night nerves’, there are no trick questions and it is based on practicalities. Afterwards the ‘guinea pigs, feel drained but satisfied, the Training people think it was all worth while and the Station Commander breathes a sigh of relief.

A new certificate is issued and any points raised by the tester will be taken on board. The twenty odd people who have not been directly involved will, when they hear the result, think ‘Well, we must be doing something right so it’s all worth while’.

So, for another Season, people using the beach and water can look up at the little hut perched on the cliff top, perhaps see the figure inside, and be sure that someone is watching and can get help if you get in difficulties. Accidents can happen to anyone, you do not have to be careless. Last night’s news told the storey of a man walking near St Day, an isolated spot, when he slipped, landed badly and broke his leg.

He was lucky – a group of disabled walkers heard his cry for help. He had not been doing anything silly – it was an accident. I have just been away on holiday and heard a story of a lady walking by a canal with her dog. The dog ran sideways and she tripped over the lead. She slid down the canal bank, into the lock. The water picked her up and carried her through an underground[Type a quote from the document or the summary of an interesting point. You can position the text box anywhere in the document. Use the Text Box Tools tab to change the formatting of the pull quote text box.]

sluice into a large pond. Amazingly she survived. No one was really at fault in either of these incidents but, more importantly, someone saw or heard of their plight. Because of that they were saved. That is what we are in the Lookout for – someone to get help if you need it. But still, I am afraid, don’t do it on a Tuesday, as we have not got enough people to cover every day of the week. You could come along and help us cover that day. Give Sue a ring on 01872 530500 or Chris on 01326 270681