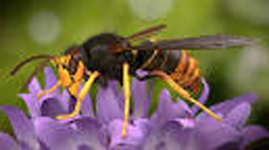 Things are quietening down now in the apiary. The bees are still bringing in nectar and pollen from the ivy and the asters, which will provide them with their winter stores. Very little is going into the supers for me to take away, though – disappointingly the same as last year and the year before. This is mainly because the autumn weather has cooled noticeably over the past few days, whereas for the bees to be able to provide me with removable excess requires a longer, warmer period, lasting well into November, if not December. 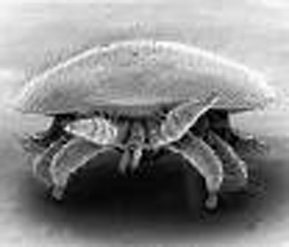 Last Sunday (the day of the “big storm”!) I checked all my hives both at home and at my out-apiaries just to make sure they were weighed down just that little bit more than usual to prevent their being tipped over by the gusts of wind we were warned about. At the same time, I checked the colony sizes and stores, and all, apart from one at my Tregony out-apiary, were well provisioned with both bees and stores. This augurs well for the winter ahead and so far I have not needed to feed any colonies, something which should only be necessary in an emergency but even then should be viewed exactly as that – an emergency task – as the nourishment in sugar syrup is extremely limited in terms of minerals, amino acids, lipids, etc. compared with nectar. 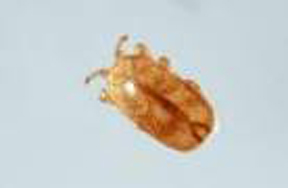 As for the storm, well, I think it was an over-reaction by the Met Office to avoid another Michael Fish incident – poor fellow; he’ll never be forgiven for his 1987 forecast (which was actually the Met Office’s, not his, anyway!). However, a useful spur is for me to finalise the pre-winter checks on my colonies, so I can now start my winter chores without having to worry too much about my charges.

I received a letter last week from Fera (the Food and Environment Research Agency) who run the National Bee Unit (NBU). You may remember I have mentioned my apiary at home being a Sentinel Apiary, i.e. one that is more closely monitored than other beekeepers’ apiaries for the arrival of exotic pests. Varroa is one such pest but since it is now established throughout the UK is regarded as endemic and is expected to be found in all beehives in the UK. 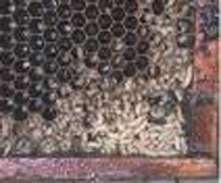 Other exotic pests which we’re half-expecting to arrive at some point, (though hoping against hope that they don’t) are a smaller mite than Varroa, called Tropilaelaps clareae, which has the same effect on bees as Varroa, sucking their blood and weakening them, thus shortening their lives, and a creature called the Small Hive Beetle. This beetle lays its eggs in the crevices inside the hive in their thousands and when the eggs have hatched, the resulting larvae chew their way through the brood and honey stores, making the hive uninhabitable for the bees.

It is a big problem in America, Australia and also other parts of Europe, so we really do not want it here – Varroa is enough for us to deal with, thank you very much! So, selected apiaries near to ports of ingress (Falmouth in my case) are regularly monitored for these pests by the beekeeper sending off floor debris samples from one or more hives in the apiary for analysis at the NBU. The letter I received assures me that there is no sign of either of the new pests (obviously, good news in itself) but also that my Varroa loads in the debris sampled were very low – brilliant news as far as I’m concerned because it supports my view that my innocuous treatment regime is working. 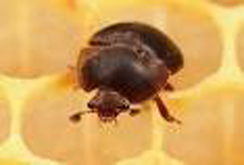 There are those in the beekeeping community who think icing sugar is not a robust enough treatment for Varroa, so they use chemicals in their hives as a “certain” way of reducing Varroa numbers. I don’t use chemicals of any sort in my hives (for the sake of the bees and the honey), relying on the icing sugar that I dust over my bees to encourage the bees to groom one another (as well as themselves) in order to remove the sugar dust, thereby coincidentally also removing any Varroa mites that are on their sisters (and brothers). One other pest we are looking out for is the Asian hornet, Vespa velutina, which is smaller than our European hornet but capable of wiping out bee colonies a lot more easily.

This pest has caused major problems in France and other parts of Europe and is spreading rapidly, so it is likely that it won’t be long before it has hitched a lift across the Channel and adds to our woes. Until then, all we can do is keep our eyes peeled and report any sightings of any of these pests to the NBU – but let’s hope this is never necessary.