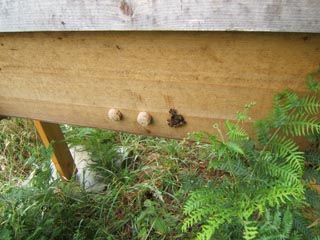 What a busy month this has been – and what brilliant weather! The bees have at last remembered what life is about and have been frenetically foraging for nectar on the clover – and doubtless other crops as well – from dawn till dusk, though I’ve hardly seen a single honeybee on the bramble flowers (which are now fruiting). The result of all this sudden nectar availability is that the bees have been bringing it back to the hive and storing it as soon as they could, anywhere in the hive. This has meant that, in some cases, the brood-box (where the queen lays her eggs and the brood is developed) has been the repository, as it is the first storage area the bees find on returning from the fields. 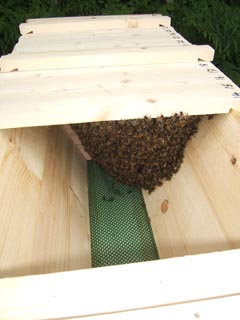 As a result, some colonies have run short of laying space for the queen and their instinctive reaction to space shortage is to swarm. I have never before had as many swarm calls as I have had this year, maybe because people are becoming more aware of the importance of contacting beekeepers so that they may capture the swarms and treat them for Varroa, so keeping them alive. Or maybe it is because the heavy nectar-flow has resulted in more swarms issuing.

These calls have been passed on to other beekeepers who are nearer the scene (Blackwater, Bissoe, Plymouth (!!), Newquay amongst others), whilst I have dealt with more local ones myself. This is mainly because a rapid response is of importance with swarms, as, having settled in a tree as a temporary staging post, the bees could depart to regions unknown within minutes, or certainly an hour or two. Since most swarms aren’t spotted until they’ve already been hanging in the tree for quite a while, if they are not retrieved quickly they could just decamp, having found a suitable chimney or roof-space for their next home. So finding a beekeeper who is immediately available and who wants to collect the swarm is ever a problem – mind you, there are plenty of beekeepers willing to accept a swarm, as long as they don’t have to collect it! 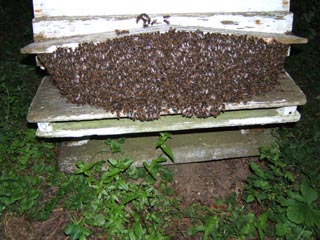 As for my bees, well the top bar hive is going great guns – the bees are now busy building 12 combs, having started with 6, so a really industrious colony. My Warré hive, on the other hand, seems to be struggling for some reason. Having started off quite strongly, the bees have not drawn any new comb for a while now, so whether it is due to the fact that the bees are getting relatively old or some other reason I don’t yet know. The difficulty is that it is not easy to transfer young bees or emerging brood from a standard hive frame to the Warré, as its dimensions are so unique. Ah well, one of the many problems associated with management of a different hive type – but I shall persevere and keep you posted on developments. 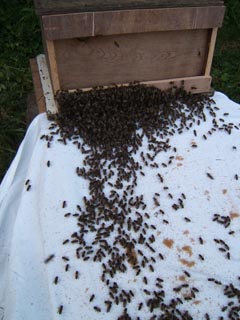 With regard to the other hives, I have made more splits on one of them and given away the splits to beekeepers who had lost bees last year – and the bees are still bringing in nectar as if I had not done anything to reduce their numbers! This is one of the many miracles of the honeybee world – if there are not enough older bees to forage when there is a flow on and there is a reduced amount of brood to feed (because of having made splits), the younger bees skip ahead in their development and become foragers earlier than they would normally do. This provides both the colony and myself with more honey than would otherwise be the case, as there is more storage in the brood-nest area as well as upstairs in the supers. A “win-win” situation – and I’ve deterred the bees from swarming.

And you might remember, 2 years ago I retrieved a swarm from a ceanothus bush in St Mawes on the 29th September (very late in the season for a swarm). They had been in the bush for so long they had built about 6 combs amongst the branches and were really quite well-established. I transferred them, en bloc, to a jumbo hive chamber, as it was not possible to cut the combs out – and they have flourished ever since! Each year, I cajole the queen into an upper brood box and then make a split, so that the original colony in the wild comb has to make a new queen. I did this again this year and both halves are doing well. 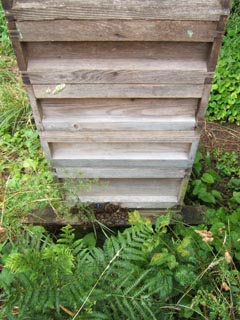 So all-in-all, a good year so far – winter losses made good and a honey crop – though I shouldn’t count my eggs before they’re hatched! If we get a cold snap the bees could eat all the excess honey they’ve brought in, though I’ll try to ensure I have some honey for the Show in September!

The season isn’t over yet by a long way, so, as ever, keep your eyes open for swarms and let me or another beekeeper know so we can collect them – and enjoy the summer whilst it lasts!