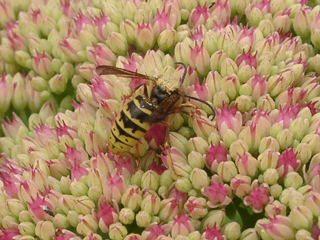 The past few weeks have been ideal foraging weather for the bees – dry, sunny, low wind speeds. The problem is that at this time of year there is little for the bees to forage on apart from garden flowers. As a result, that is where you will have been seeing them, whereas up until the start of the month many people had been saying “I haven’t seen many bees in my garden this year”.

Once the hedgerow flowers and field crops such as clover are over, the bees are reduced to foraging less efficiently in our gardens, which gives us the opportunity of helping them by planting nectar-rich species, as opposed to the showy, double-flowered varieties, which are generally nectar-free.

This gives the bees an “emergency” food source in between nectar flows. Coincident with this reduction in nectar flow is the reduction in the size of the brood-nest, so whilst the bees are not short of food for their young, they do end up with a lot more space in the brood-nest, just ready and waiting for the aster and ivy flow to start so they can build up their winter stores. Some nectar is still coming in from bramble, as this tends to have quite a long season and so is a very important contributor to the colony’s food store, and judging by the grey pollen I see going into my colonies there is enough to keep them busy for a while yet. 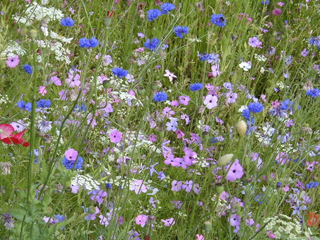 The bad news is that, whilst the bees’ brood-nest size is reducing, so is that of the wasp colonies. This means that there is less wasp brood for the adults to feed meat to, and therefore less sweet excrescence exuded from the brood as a reward for their efforts. The adults are therefore desperate for sweetness from other sources, namely bee colonies. I have lost two colonies of bees to wasps this year, admittedly weaker colonies, but the wasps turn up in number and force their way into the hive, take all the stores, and also thieve the brood in the now disheartened colony to take to their young. I have placed about 15 traps around my apiaries this summer and they are all filled with dead wasps, which gives an indication as to how bad the problem has been. They are even getting into my bee shed to clean up any remains of honey in empty supers of combs – though not many live to tell the tale to their sisters back home!

On a more cheerful subject, one of my (honey) customers has sown a small wild-flower meadow this summer and I recently moved a hive there to complete the picture. Wild flower meadows are difficult to establish, relying on poor quality soil and no competition from the lusty grasses to choke their growth, so this was a rare opportunity to place the bees where they will be appreciated and where they will have nectar-producing flowers just outside their door. I hope to move another two hives there shortly, ready for next year.

In a year such as this, following a long, cold, wet winter, when a large number of colonies did not survive, there has been a lot of queen rearing taking place, together with colony splits, to get the numbers back to where they were. This inevitably requires the provision of bees – from otherwise strong, healthy colonies. 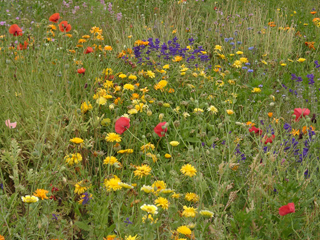 Having thus reduced the numbers of bees in these colonies, the knock-on effect is that the foraging force is not as large as it would have been and so the honey crop is negatively affected. Surprisingly enough, then, I was delighted to find that not only had I made my colony numbers up to what they were at the end of last year (in addition to giving away some nuclei and some queens), I also was able to take a honey crop. What a bonus! After struggling for the past 5 or 6 years with short, wet, cold summers, the bees have been rewarded with some decent flying time and decent foraging conditions.

So, apart from the wasps, it’s been a great beekeeping season, giving us beekeepers hope for the future of our wards. We just need to ensure now that they are well-fed in readiness for winter and have been treated for Varroa so that the bees that go into winter will be virus-free and as healthy as possible. As I’ve said before, beekeeping is no longer just about collecting the honey at the end of the summer, it’s also about caring for our charges, ensuring their lives are stress free and that they are as healthy as possible, so enabling them to live inside their hives through however long a winter might be thrown at them.

They may only live for 6 weeks in the summer but they have to live maybe for 6 months during a long winter. That means they need the opportunity to stock up on pollen and nectar and also to build up their body fats to withstand the long periods confined in the hive through wet or cold weather. Since last winter’s losses were as much due to a lack of such pollen as to the cold and wet, here’s hoping for an early ivy flow and a pollen-rich autumn!