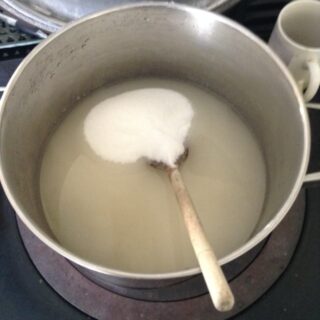 The bees are getting a bit fed up with all the rain we’ve been having during November – as am I!  Whilst there’s not a lot of forage around for them at the moment, when the weather permits they are still out and about checking for remains of ivy flowers and asters.  The problem is they are getting through their stores quite rapidly at the moment due to the warm weather and they realise they won’t have enough stores to see them through the winter.  In fact, we’ve had a second missive from the National Bee Unit warning that bee colonies are being found which are dangerously short of stores and advising all beekeepers to check their colonies.
As it happens, I have been making fondant during the past month by boiling up a concentrated solution of sugar in a little water. 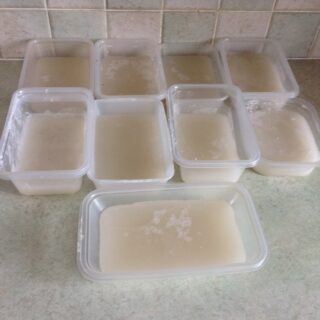 Once dissolved this is then poured into moulds which, when the fondant has set, are then placed on my colonies as an insurance policy against running out of stores.  I had already been a little concerned they were working their way through their stores rather rapidly this year, though November is early for them to be doing this.  I don’t normally need to give them fondant until after Christmas or some time in January.  That gives some indication as to how mild it has been this autumn compared with “normal” years.

When I arrived to place the fondant on one of the colonies that had been collected as a swarm in the summer, I immediately noticed there were no flying bees, not even one or two as there were outside neighbouring colonies.  The swarm had not performed particularly well during the season, especially when compared to other swarms, and had only ever drawn partial combs, so I knew they were struggling – despite feeding them after they were hived.   I was, however, devastated to find that, on removing the roof, it had been leaking and the nucleus box inside the outer casing was absolutely soaking wet!  I’ve mentioned before that bees can cope with the cold but can’t cope with damp and this proved to be the case here.  The majority of the bees had died, leaving just a few bees on the combs and although the queen was still alive there were not enough bees to sustain her.  To try and recover the situation was, in my opinion, impossible.  It’s too late (and has been too cold) to try to remedy the situation by transferring brood combs and bees from other colonies to support the queen without causing problems for the donor hives, so I’m sad to say this colony is no more.  I think the problem was exacerbated by the fact that the dead bees were also blocking the entrance and so there was virtually no ventilation.  Mind you, I’m still racked with guilt that I hadn’t spotted the problem before it resulted in their demise. 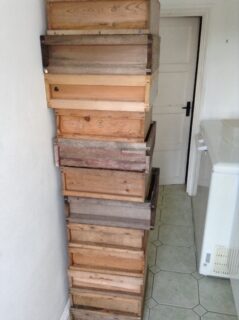 On a more positive note, I have now taken off all the supers containing ivy honey and will be melting them down over the next few weeks.

If there’s ivy honey in the supers on top then it generally indicates that there is ivy honey in the brood box, otherwise the bees would have either not put it there in the first place or would have taken it down, so I’m not taking away their food at a time when winter supplies are dwindling. 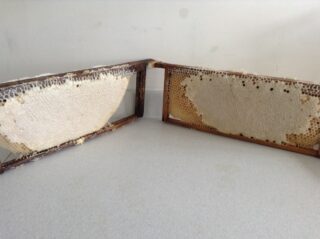 Not all the supers are full though they have all been worked to varying degrees.  This is the first ivy crop I’ve had for two years, so I’m well pleased, especially since hearing, after talking with the Regional Bee Inspector the other day, that he hasn’t been able to take any ivy honey at all and that his summer crop, like mine, was severely down on previous years, so I have been lucky. 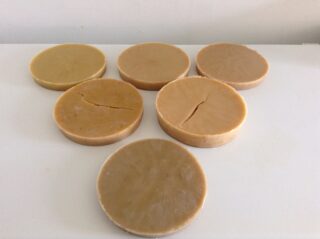 Winter time, as I’ve said before, doesn’t mean that bee-related activities grind to a halt.  I have been busy repairing and painting equipment ready for next season (how that roof escaped my eagle eye, I don’t know!).  I have also been rendering wax and producing lovely blocks of clean wax which will either be sold to makers of cosmetics or made into candles.

In addition, I have been asked to contribute to a book being written on sustainable beekeeping and also to write an article for a quarterly magazine.  The magazine delves into various subjects, mainly concerned with financial matters and the business world but also dealing with topics that might be of general interest during lock-down, examples being railway modeling, South West Coast Path walks, gin tasting, and more.  Quite an interesting diversity of topics!   Hopefully my article will stimulate more interest in beekeeping as a hobby so that we can increase the numbers of bee colonies in the South West.

So, as a beekeeper, the winter months don’t take me totally away from the craft!

Whilst doing my daily hive check/apiary walk-about today, I noticed a lot of flying bees at some hive entrances – but then noticed a large number of bees at the entrance of a small nuc near to them, far more than I would expect to see from that particular colony.  The bees were robbing this weaker colony (which shows how desperate they are for stores at the moment as it was quite a cold day).  The only thing I could do was to close the entrance, trapping some of the robbers inside who, after a few days, might identify themselves as belonging to this colony.  When I come to open the entrance again, I will stack copious amounts of dead bracken and tree branches in front of the entrance in the hope that the exiting bees will re-orientate to the nuc location and stay with the nuc colony thereby giving it a boost.

Finally, Asian Hornet sightings this year.  There was only one and that was at Gosport in Hampshire (quite near some convenient ports!) in September.  The sighting resulted in the nest being tracked down and destroyed three days later, so that is more good news.  It sounds as if we’re keeping on top of this further threat to our honey bees, thanks to members of the public like you.

So, as it’s a quiet time in the apiary now (relatively speaking), there is a little more time to do some more reading once the other tasks are out of the way!