So that’s what winter feels like!  It’s been so long since we had any truly cold weather, it came as a bit of a shock to us all, I think, even though we got off lightly again down here on the south coast of Cornwall.  Not so for the bees, though!  They have been bringing in nectar and pollen right up to the last minute in readiness for what, I suspect, they know is going to be a hard winter.

During the cold spell, I have been hefting my hives from time to time (ie lifting one side of the hive just a ¼” off the ground, then going round to the other side of the hive and lifting that ¼” off the ground) to check the amount of stores inside.  If a hive felt as if it were nailed to the ground, then it will have more than sufficient stores to see the bees through the next few months.  Otherwise, if I am in danger of tipping the hive over by hefting, then the colony is light on stores and should be fed.  I am pleased to say that the majority of my hives are well-provisioned with winter food, only the occasional one or two being light.  These will be fine for now but I will be putting fondant on those hives before the end of the month so the bees have access to an emergency back-up supply of food should they need it.

In order to get a realistic idea of the amount of food stored, prior to each hefting I removed the roof from the hive.  Where there were supers above the brood box, either for cleaning by the bees or to store any surplus ivy honey, these were also removed.  This I was able to do without need of protective clothing, as during the cold spell the bees formed a tight cluster around the queen in the brood box, so   there were no bees upstairs in the supers – except for one colony!  When I removed the super that was next to the brood box, I saw a clump of bees at the bottom of three of the combs, which then took flight, despite the cold weather, to repel the intruder – me!  One of them flew straight at my eye but I saw it coming and was able to duck – but it still managed to sting me, luckily under the eye, so no big deal.  If one gets stung in the eye it can result in the permanent loss of sight, so I beat a hasty retreat to put my bee-suit on to finish what I was doing with this hive. 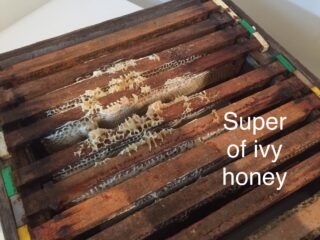 I am pleased to say that the price of the sting was well worth paying for the ivy honey I was able to retrieve, whilst the remaining brood box still weighed a ton, so that hive will be fine until January/February time.

This particular colony was a swarm I collected during the summer which grew and grew to the point that I had three supers on it by the end of the season, just to accommodate the number of bees!  It will be interesting to see how they perform next year, especially since they have a lovely black queen.

After putting that hive back together, I changed from my bee-suit back to the snood, woolly hat and fleece that I started out with to combat the cold, and continued removing excess supers from the remaining hives.  There were no signs of bees in any other supers, though by the time I had replaced the perspex crown-board the bees had come up from their cluster to check out the disturbance, so I knew there were bees there.

All in all, therefore, I now have an ivy crop not to be sniffed at – and I haven’t removed the supers from my out-apiary hives yet, so I am well pleased (as will be some of my customers!). 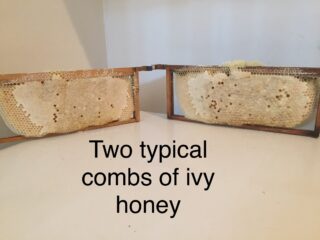 I also have the vast majority of my colonies in a strong and healthy state for the rigours of winter that lie ahead.  As ever, it is the smaller nuclei that will need to be cared for and looked out for during the winter, but bees are quite resilient and they will hopefully emerge in the Spring to make full colonies during next season.

At our Roseland Beekeeping Group meeting in November, we had a visit from our Seasonal Bee Inspector (SBI), during which he told us about the different diseases and pests that can be found in our hives.  It appears that occurrences of European Foulbrood have increased in the South West this year, which is a cause for concern.  However, this chimes with a recent study on the effects of climate change on our bees undertaken at Newcastle University, which found that climate change has significantly increased the risk of honey bees catching fatal diseases.  In fact, it has made the South West of England a hotspot for the deadly Varroa mite, though North Yorkshire, Lincolnshire and Norfolk are also being hit by increases in mite numbers.  Researchers have found that for every 1°C temperature increase. honey bees are 39 per cent more likely to become infected by Varroa mites, which are favoured by warmer climates. 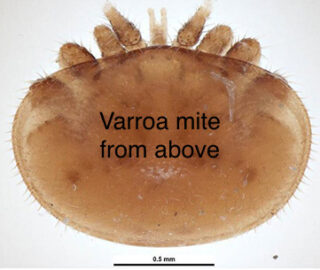 Moreover, Powys, Shropshire, Herefordshire and Worcestershire have also emerged as hotspots for the serious bacterial honey bee disease European Foulbrood, amid rising temperatures in those areas.

“These results are worrying because they show that serious diseases like Varroa continue to increase in UK honey bee populations – and it seems that there are clear climatic variables that further increase the risk of disease,” according to the lead researcher, PhD student Ben Rowland.  This impact of climate change is therefore piling further pressure on honey bees, a group of beleaguered pollinators which play a key role in food production, already hard hit by habitat destruction and pesticides. 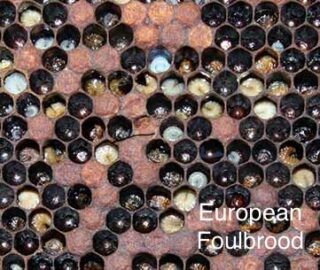 Professor Giles Budge, also of Newcastle University, added: “We have long known that weather can influence the ability of honey bees to leave the hive and forage for food.  This new knowledge will help us predict how honey bee disease might be influenced by future climate change. The study also found that whilst windier, rainier weather that also results from climate change reduces the risk of honey bee disease, this is outweighed by the effect of temperature increases. 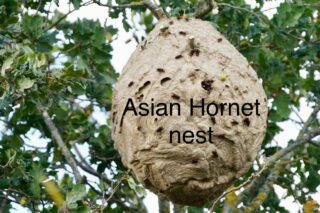 This underlines the importance of keeping an eye open for nests of this exotic pest, as well as for the insect itself.

One of the sightings was reported by a beekeeper, the other by a member of the public, so we all have a role to play in preventing the establishment of the Asian Hornet in the UK. 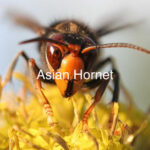 seems to crop up more frequently these days!) with Christmas just over three weeks away!  I hope you all have a wonderful time, perhaps with family visits (Covid allowing!), and look forward to keeping you abreast of what’s happening in the world of the honey bee in 2022.