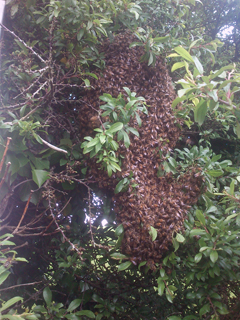 As I predicted in one of my earlier reports, an early swarming season is now upon us! It started in April in other parts of Cornwall, but my first was on 9 May, when I found a small to medium-sized swarm of bees on the roof of one of my hives – a very strange settling place and totally unclear as to where it had come from.

However, notwithstanding the mystery, I captured them by placing my swarm box over them, with a flap from the box leaning against the cluster so the bees had a “ladder” to climb up inside. In their own time, they went in and that night I hived them in my polystyrene jumbo Langstroth hive (because of its large size, I needed to repopulate that as early in the season as possible, so that any colony had plenty of time to fill it with stores and brood). I have been feeding them since then and they appear to be settled well in their new home.

Then, two days later, at the end of the afternoon, I had a call to say there was a swarm at a property in Pentewan. I quickly gathered my equipment together, placed the swarm box by the boot of the car ready for loading, put my bee-suit, smoker and smoker fuel in the front of the car, and off I drove – only to find, when I got there, that I had driven off leaving my swam box where the car had been parked! As I said to the lady who kindly provided me with a cardboard box for the swarm, it was the first time in 20 years of beekeeping that I had done such a thing – it won’t happen again!! However, with the help of that kindly neighbour, I captured the swarm, so those bees are also hived, this time on a standard brood box and again progressing well.

A week later, whilst doing my customary mid-morning walk-about in my home apiary, I heard the distinctive sound of a swarm, and, yes, there it was, a fairly small swarm high in the blackthorn hedge behind the hives. So back to the house to get my extension ladder to retrieve them. On my return, I then heard (and it was these I had heard just now, not the swarm in the blackthorn) – and saw – thousands more bees flying out of the hive I was standing next to, wheeling around in the air, wondering where they should go to pitch for their temporary clustering place. The air was thick with bees, flying this way and that, with me hoping against hope that they wouldn’t just fly off into the far yonder.

There was nothing I could do about it whatever they decided to do, so after about 5 or10 minutes, I left them to it to have an early lunch, as by then they had started settling next to the smaller swarm spotted earlier, though whether they were related or not, I do not know. After lunch, I returned to the apiary and (breathes huge sigh of relief!), there they were – a massive swarm hanging about 10 ft up in the blackthorn, with the two swarms having merged. 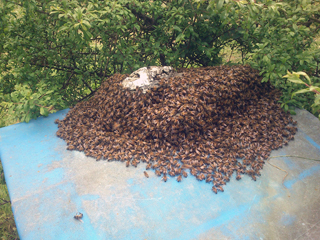 I shook them down into my swam box, having leant my ladder precariously against the blackthorn, which, as I climbed higher, sank lower and lower into the hedge! But I got them and hived them that evening in a jumbo-sized brood box, as they would not have had enough room in a standard box. How lucky I was to have been in the apiary at that time, or, more to the point, how essential it is to check your apiary at various times during the day during the swarming season so you are on hand to capture unexpected swarms.

A few days later I was phoned at 9.30 in the morning to say there were bees all over the road and flying everywhere in the next village – rather early in the day for bees to swarm from their hive, so I reckon they had been hanging in a tree overnight before their arrival. Anyway, could I help? So off I go, and there they were, easy to find with all that flying around, hanging in a hedge by some old supers that had been left out by another beekeeper (who was away for a few days).

I captured the swarm in my faithful old swarm box (so covered with new comb and wax on the inside, it is very attractive to swarms once I have got them in) and took them away that evening. A neighbour had seen the bees coming over the houses from a direction further away again from my hives, so it wasn’t a swarm from my apiary, thankfully. However, the problem with old supers and the old combs inside is that they are very attractive to bees – the fact that some of the combs still had honey in them made them even more so.

Even if no swarm were attracted to enter these boxes (this one wasn’t), passing bees would smell the honey and go inside to investigate, picking up any disease spores that might be lying dormant in the combs and taking them back to their hives. Leaving equipment like this lying around outside is the biggest no-no in beekeeping. After all, look at what has happened in the USA. Beekeepers there, as a matter of course, leave partly emptied combs out in the open for bees to clean up the remaining honey. 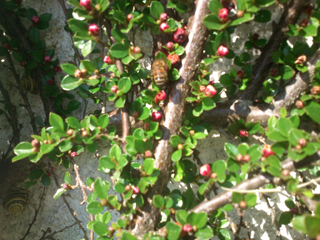 The bees from hundreds of different hives are attracted to these combs (and remember, American beekeepers are mainly commercial, often having thousands of hives in each apiary), pick up disease spores, fly back to their hives and spread the disease in epidemic proportions across multiple colonies. American beekeepers have been having major problems with bee losses and bee disease for many years now, but don’t appear to be getting the message, whereas it’s pretty clear what the problem is.

The beekeepers even anticipate the possibility/likelihood of getting these diseases, so treat their bees prophylactically! And yet they still wonder why they have problems! Look at the way we humans have used antibiotics in medicine, bringing us to the point where they are becoming almost valueless in terms of their ability to fight disease because of the resistance build-up against them by the diseases. Such equipment should be cleaned of old comb and sterilised (one of our many winter jobs) before being placed in bee-proof conditions inside a shed or garage. I have since spoken with the beekeeper concerned in as friendly and non-condemnatory a fashion as possible (hard for me, but at least I tried!), but the equipment is still there – it remains to be seen if the message has got through!

Enough! Back to other swarms! I came home one evening at 8pm to find two messages from Ruan Lanihorne – one was a swarm in a chimney, the other a swarm in a hedge. The hedge swarm took priority and turned out to be about 6ft off the ground – which was at the top of a steep 5ft slope on top of a vertical 5ft wall! Not an easy one (are they ever?) but we borrowed a (too-short) ladder and with two ladies holding the base of the ladder flush against the wall. 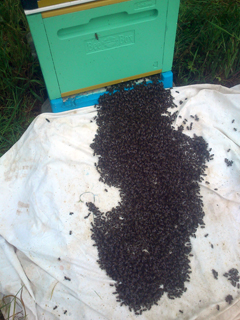 I hung in the air atop the projecting ladder (I suppose a job in the Circus might be an appropriate follow-on to beekeeping!), reached the bees and dropped them into my swarm box (I was told afterwards that the ladies were extremely worried that I would drop the box and cover them with angry bees!). We were all extremely relieved when I cam down the ladder with box and bees intact and nobody had been stung! The following day, a telephone call from the chimney swarm lady informed me that they had gone and was the swarm I had collected the previous day the colony that had inhabited the chimney? We will never know!

Finally, a colony in an attic in Tregony, a colony in the wall of a stone cottage in St Mawes and a swarm in a roof at Pendower (which was no longer there when I arrived), all served to keep me off the streets during May! I wonder what June will bring!

Do contact me if you see or know of a swarm – I will ensure its retrieval by me or another beekeeper before it reaches your attic or chimney. Hopefully!