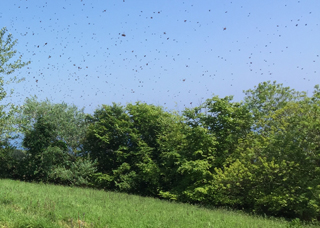 At long last the weather has broken and Mother Nature has started to rectify the discrepancy of our inappropriate unseasonal weather! The past month has been glorious – and the bees have been making the most of it. Those colonies that had been struggling to feed their young, as well as themselves, at long last were given the opportunity they sought and have been working the Spring flowers like never before.

The down-side to this, of course, is that some colonies will then think it might be a good time to swarm and, true enough, I have collected one swarm (that was not one of mine) and captured one in my home apiary. In general, though, the swarming season has got off to a slow start, as the bee season (like the garden) is about 2-3 weeks late – more in some areas – so swarming will become a bigger problem over the next few weeks.

The first call I had was to the wild tree colony that I’ve referred to before. My beekeeping student, John, who lives about 50yds up the road from this tree colony, phoned me to say there was a swarm in his field – so off I went. 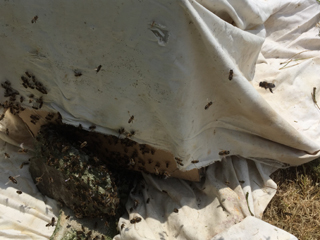 Though I was there in no time at all the swarm was nowhere to be seen when I arrived and despite searching all the adjacent hedgerows, trees and farm buildings in the vicinity there was no sign of it.

My caller, however, was quite sure that, whilst there had been a swarm, he had not seen a cluster at any point, so I was left wondering what he had actually seen. Interestingly, the initial location of the “swarm” was adjacent to overhead high voltage cables, and bees definitely do not like these as they radiate electromagnetic frequencies that disrupt their orientation capabilities, so that could be why they decamped from their initial landing site.

There was some activity around the bait hive that I put up later that day (horse/gate/bolt?) but nothing resembling a swarm, which was a great disappointment to me as any swarm from the tree colony is likely to have a black queen with a survival capability that would be good breeding material. 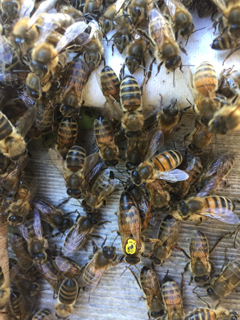 However, the next day John called again, this time, though, there was actually a clustered swarm in his orchard.- so off I go again. This time the swarm was still there – but not so much in his orchard as 25′ up an elm tree on the edge of his orchard – so much for the low branch, snip, swarm in the box, go home routine!

After numerous trapeze-like acrobatic contortions, I succeeded in capturing the swarm, which was extremely docile and non-stinging – very pleasant to work with. Though John thought they were black bees, to me they were too coloured to come from a Cornish moggie. However, I would find out when I hived them – which I did the following evening, only to see the queen stroll up the hiving board into the hive with a golden crown! 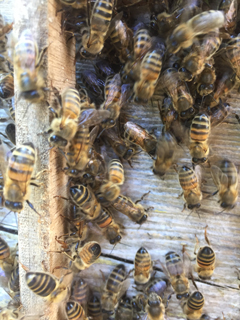 She was from a managed colony, not the wild tree colony, and was last year’s queen, but more to the point, apart from her golden crown, was an Italian cross-bred. Ho hum! Better luck next time. Mind you, the bees went into the hive very quickly once I started to hive them and have been drawing a phenomenal amount of comb, so it all looks promising. Perhaps I will let the queen carry on for this season, but I must then replace her with a darker version.

The day after hiving this swarm, I sensed I had a swarm in my own apiary from one of my hives, and sure enough, there, hanging from a branch on the pine in the middle of the field, was the swarm. They totally ignored my log hive but showed great interest in the bait hive I use every year down at the bottom of the field. 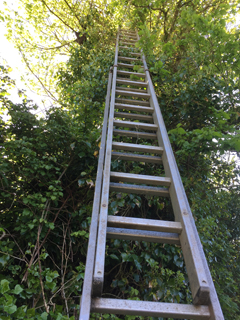 There must be something about that hive that attracts the bees because there are bees flying around it quite often and swarms regularly end up occupying it on a temporary basis. So I knocked the swarm off the branch into a box – and was thanked for my trouble by one or two rather upset young ladies! (The thought crossed my mind that maybe they were hungry – time would tell).

Since it was now late afternoon, I decided to hive them straight away, using a larger brood box than the standard (what is known as a “Commercial”) and using starter strips as opposed to full sheets of foundation (I feel it is more natural for the bees to draw wax this way). The reason behind my thinking was that I thought they had swarmed because of an early build-up and they would need a larger brood box than normal.

I knew which hive they had come from, so moved that hive 2′ to one side and placed the Commercial on the original site (this is known as making an “artificial swarm”, presenting the bees with exactly the situation they had created in Nature but keeping the whole process under my control! Anyway, whilst most of the bees went into the hive, a large cluster just sat on the outer wall and wouldn’t go in. 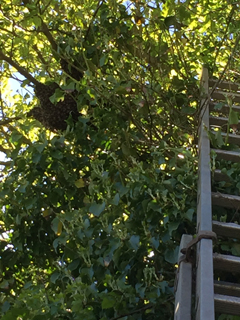 This is generally not a problem, as I’ve seen this happen before and by the following morning all the bees are in the hive and they settle down quite quickly. However, on this occasion, when I checked the hive the following morning there were only about a dozen bees inside, and those were mostly drones! Where were they? Yes, you’ve guessed it, in the bait hive at the bottom of the field that all swarms love!

So, come the evening, I took the bait hive down and shook the bees off the bait hive combs in front of the hive that I wanted them to occupy, and they ran in as if butter wouldn’t melt! Once the combs were cleared, there was the matter of the bees on the floor and side-walls of the bait hive, so I just brushed them down into the top of the Commercial brood box that their sisters were occupying, put a queen excluder under it to stop the queen coming out, and left them to it.

The following morning, all appeared to be normal, but at lunchtime, I was doing my normal apiary wander when I saw a lot of bees showing an interest in one of my empty hives, left in place for this very purpose – to catch a swarm. I heard the unmistakeable sound of a swarm taking to the skies – and yes, there it was, coming from the Commercial hive again! But how? There was a queen excluder under the brood box to stop this very situation. I need not have worried. 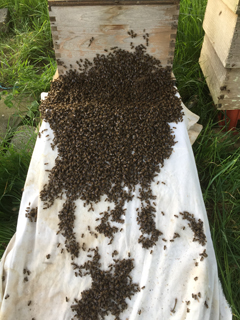 After about half an hour the bees returned to the Commercial, realising they had “forgotten” their queen and calm was restored to the apiary. I left the excluder in place for a few days, giving the bees time to draw new comb and for the queen to lay in it, and then removed it so that the drones could get out of the hive again. Once there is brood present, bees tend not to abandon their hives unless there are exceptional circumstances, e.g. impending starvation or high disease load.

Since then, all has been sweetness and light in the apiary – but who said beekeeping was simple? The things we beekeepers have to do to get you guys a jar of honey!!

Please continue to look out for swarms and for the Asian Hornet and contact me (by phone, preferably, for a quick response) and I will ensure the appropriate resources are brought to bear.