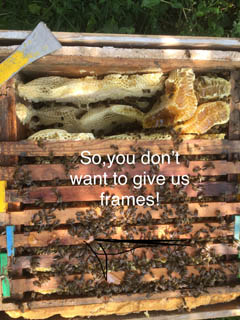 So April is due to be the hottest April on record – hasn’t it been wonderful to see the sun shining again and have dry weather for almost weeks at a time?  The bees have certainly appreciated it!  They’ve been bringing in pollen and nectar like there’s no tomorrow and their queens are raising young at a phenomenal rate, so much so I’m surprised I haven’t had any swarm calls yet.

But having said, that, when I was going through my colonies to check for stores and laying space during this past month, whilst there was plenty of drone brood in evidence, I did not see any drones flying – without drones, virgin queens can’t mate, so there’s no point in bees swarming.

However, I did see bees investigating my bait hives, which indicated at least one of my colonies was thinking about swarming.  This was hopefully and likely to be one of my over-wintered nucs which has come on at a tremendous rate since the beginning of the year, so I have deliberately left that to grow to swarming point so that I could make a split of the colony to make more nucs.

Making a split is a standard practice beekeepers use to increase their numbers of stocks, as well as to control swarming, and last week I went to the apiary to do exactly that to this particular nuc.  Firstly, I moved the nuc to a new stand about 6’ away from its original position.  I placed am empty nuc box on the original site and filled it with empty frames containing just starter strips of foundation.

During this time, the flying bees from the original, moved, nuc were returning from their foraging trips to the original site and were filling up the empty nuc with bees.  So far, so good.  I then needed to check, firstly, where the queen was and secondly that both nucs that didn’t have the queen had brood of the correct age for them to be able to create a new queen. 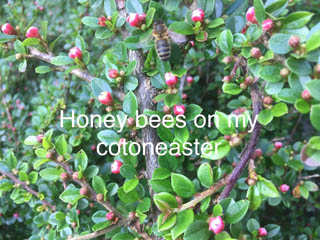 First of all, I checked the original nuc, because that was now becoming devoid of flying bees and with less bees to search through it would be easier to find the queen if she was there – and she was!  That made my life a lot easier, because this nuc had plenty of stores (to keep them going whilst they developed some foragers), not that many bees (but they didn’t need that many, as they had a queen and although her laying rate would reduce to the point that the brood could be kept warm by the diminished number of bees, they could basically mark time until more bees emerged from the already sealed brood cells developed whilst on their original site).

I then checked the new nuc on the original site.  Lots and lots of flying bees, as I expected, but by moving them around the comb I was able to see that there were two queen cells being developed on one of the frames and a single queen cell being developed on the other frame.  So they were ready to go as far as raising a new queen was concerned.  They had lots of flying bees to bring in nectar and pollen and they had eggs, larvae and sealed brood.

When I checked the third nuc, 25 metres away, I couldn’t see any queen cells or eggs but there were young larvae and plenty of sealed brood, though not too many bees, so I decided to hope for the best, as it was late in the afternoon and starting to get cold.  I closed up the nuc and left them to it. 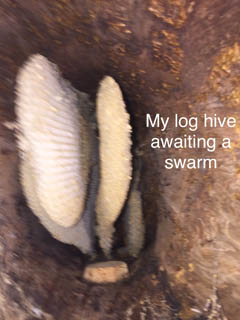 There is a very good book, written by a beekeeper called Storch, called “At the Hive Entrance”, in which Storch describes how a beekeeper can get a very good idea about what is going on inside a hive just by watching the bees at the hive entrance, without the need to open up the hive and remove any frames.

This is most helpful to the bees, as every intrusion (whether necessary or not) into their hive causes some degree of stress and it takes them anything up to 48 hours to return the hive to its original state, time which is wasted in terms of foraging that they could otherwise have been doing.  It is also very helpful to the beekeeper, as in this particular case, because when I looked at my three nucs the following day I could immediately see what was going on inside just by watching the entrance for a few minutes.

The nuc with the queen was behaving as I would have expected – very little flying (remember, all the flying bees had gone back to their original site) but with one or two bees orienting to the new location.  The nuc on the original site was like Heathrow airport, with flying to and from the nuc with bees on a mission, bringing in nectar and pollen as usual. 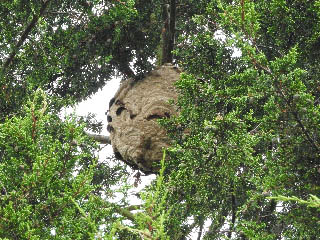 They were completing the raising of a new queen and feeding their young, so they had a purpose in life.  When I looked at the third nuc, 25 metres away, there were bees hanging around the alighting board, wondering what to do, how to spend their day, looking for something but who knows what?  In fact, the message I read into that was there were no queen cells (which I knew) and no material of the correct age to build a queen cell, so they were basically queen-less with no hope for the future.  They were either looking for their queen or throwing their hands up in the air in hopelessness.

Examining the frames confirmed my suspicions, so I removed one of the empty frames and went to the nuc with the flying bees, swapped the comb with one queen cell on it for the empty frame, and inserted the queen cell comb into the third nuc where the empty frame had been.  This comb also had a lot of bees on it, so not only was I giving the nuc a queen cell to continue building but also augmenting the number of bees to look after that queen cell.

What a palaver!  But all is now sweetness and light in the apiary!  There are no longer bees investigating the bait hives and the nuc that wanted to swarm because of lack of space has now been given a little more space (by virtue of the empty frames) and has temporarily changed its mind.  However, in 10 days time a lot more brood will have emerged in the nuc with the flying bees and it will likely be getting short on space again, so I will swap its position with the queen-right nuc. 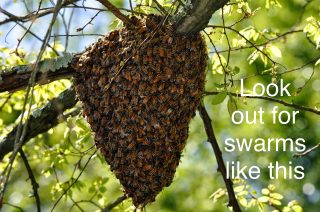 This will allow the queen-right nuc to acquire more flying bees and I could possibly think about moving it into a full brood box.  The other nuc with developing queen cells about to hatch, however, if left, could possibly swarm with the first queen to emerge, leaving the second queen cell to emerge whenever and continue the colony.  Once it has been moved, however, with no flying bees (they will have gone back to their original site – yes?!), it will have become impossible for them to swarm, so the bees will either tear down one of the cells or allow the first queen out to kill the one still in her cell.

Phew!  That done, what else have I been doing?  I have been adding the supers to colonies that are in need of more storage space and extending the number of combs in those other over-wintered nucs that have been transferred into standard brood boxes.  I also heard from a friend, beekeeper and former student of mine about a wild tree colony that is active near her.

I have placed a bait hive on her shed roof and at the end of the first day she informed me that there were bees sniffing around the entrance already!  We are both hopeful that a swarm from this tree colony (what we call “survivors”, with no assistance from beekeepers) will decide to occupy my bait hive and the colony’s genetics can be introduced into our respective apiaries.  Time will tell. 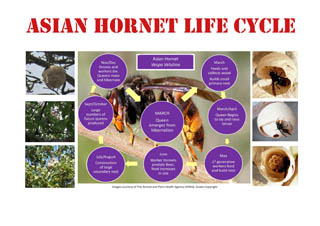 I think that’s more than enough for now but just a final reminder to keep a look out for Asian Hornets and bee swarms – both should be starting to appear very shortly and we need to know about them.  Call me in either case – beekeepers have Government approval to travel during the lock-down, provided we maintain social distancing and don’t enter any buildings.