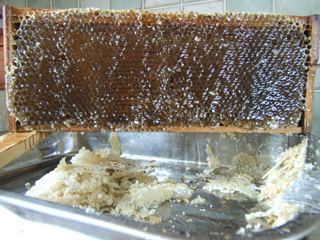 This summer has been ideal to assist with the ripening of honey inside the hive, having been hot and dry for several weeks. Honey ripening is where the bees fan inside the hive to evaporate off the excess water in the nectar they are converting into honey to bring the water content of the final product down from 82{c8c3b3d140ed11cb7662417ff7b2dc686ffa9c2daf0848ac14f76e68f36d0c20} to 18{c8c3b3d140ed11cb7662417ff7b2dc686ffa9c2daf0848ac14f76e68f36d0c20}. This reduces the likelihood of fermentation of the yeasts in the honey to a minimum.

At the same time, the bees are adding enzymes to the nectar to break down the polysaccharides into the simple sugars glucose and fructose – the mono-saccharides. The next step is for the bees to seal the cells containing this ripened honey with a capping of wax to keep out any atmospheric moisture and so preserve the honey. This seal will allow the honey to be kept for literally thousands of years if kept intact. In fact, honey has been found in the pyramids, in amphorae sealed with wax, which has been found to be quite potable. So much for any “Use by “ date as required in today’s society! 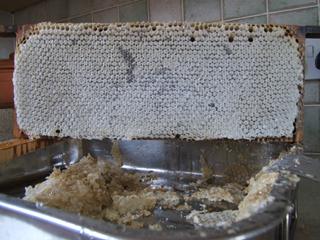 Once the honey cells are sealed, the honeycombs can then be removed indoors for extraction by the beekeeper – and that is what I have been doing for the past couple of weeks. I remove each sealed comb and brush the bees off the comb back into the hive, placing the comb in an empty super with base and lid to keep out any opportunistic bees or wasps looking for easy , undefended pickings! It can be a slow process but to my way of thinking is safer (from robbing) than isolating a whole super on the hive with a one-way valve to “bleed” the bees down into the body of the hive over a 24hr period.

Once a super’s worth of combs have been removed from the hive, the box is taken indoors to await extraction. I normally then place the super to be extracted by the Aga overnight to warm to room temperature. This aids the flow of honey from the combs when extracting, though care must be taken not to heat either the honey (which would spoil) or the wax (which would melt).

Each comb is then taken in turn, rested on a bar placed across the top of a stainless steel de-capping tray, and then has its sealed cell cappings cut away from the comb with a scalloped bread knife, allowing the wax cappings to fall into the tray beneath. The comb is then turned over and the other side treated in the same way before placing the de-capped comb, dripping beautiful, golden honey, into the extractor. This is a device, very much like a vertical spin dryer, with an outer drum having a central, vertical axle on which is mounted an open drum with slots top and bottom to hold the frames firmly in place. 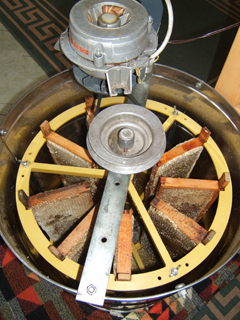 Once the open drum is loaded (in my case, with 9 combs), the motor is switched on at a very low speed to start the throwing out of the honey onto the sides of the surrounding drum. This is one of the most satisfying sounds in beekeeping (not counting, of course, the sound of a contented colony, busy during the summer months!) – the gentle splashing of honey against the side walls of the extractor! The honey then drips down the sides of this outer drum to settle in the bottom of the extractor, when, once the combs are empty and there is no more honey being thrown out of the cells against the side-walls, the combs can be removed and replaced in their original super.

No honey is wasted, as the cappings are subsequently melted and, after cooling, separated from the honey which had adhered to them. I use this honey for myself as a precaution, just in case the honey is affected by the heating. Meanwhile, the empty combs are placed back on their originating colony for cleaning of any honey remains and repair of the wax cells – but this has to be done at dusk, after the bees have stopped flying, so that robbing does not take place. If the “wet” super was placed on the hive during the day, the bees would find it and then communicate their find to their sisters by doing a “round dance”, signifying the discovery of a honey source “close to the hive”.

The bees would then fly out of the hive to look for this honey source and possibly/likely enter neighbouring hives and start robbing them of their honey, thinking that these hives were the source of the honey “close to the hive”. It is only when bees find forage a distance away from the hive that they can describe more accurately the distance and direction of the source of this forage, which they do by performing the “figure of eight” or “waggle” dance. 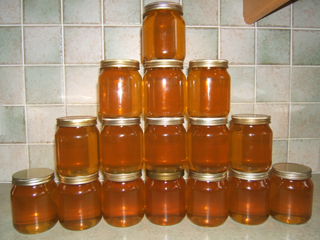 Meanwhile, the extracted honey sitting in the bottom of the extractor is emptied into a settling tank via a valve at the base. The purpose of this tank is to allow air bubbles and any small wax particles to rise to the surface over a 48hr period, leaving a clear honey for bottling. The size of wax particles in the extracted honey is limited by using a coarse filter between extractor and settling tank to trap the larger pieces of comb cut away during de-capping. I don’t use fine filters as there is a risk of reducing the pollen content of the honey which would affect the taste and health benefits of the final product, so although my honey might not be as clear as a “grand cru” wine, it has greater health benefits (in my opinion) than one which is crystal clear. Anyway, my customers like what they get and they are the best arbiters!

The final stage is to fill my honey jars from the settling tank, after the settling period of about 48hrs, ensuring the outflow from the valve in the tank hits the side of the jar so that air bubbles are minimised.

Honey extraction from hive to jar is quite a long process but the sight of jars and jars of golden honey at the end is worth all the effort – and of course the bees have been given room to store their winter stores from the ivy, with a bonus of returned honey remains, so they are happy enough. It’s been a brilliant year for the bees – and they deserve it after the past 7 years of rubbish summers! All we want now is a good autumn so they can stock up on winter stores and go into the winter with plenty of pollen and honey to see them through. Here’s hoping!