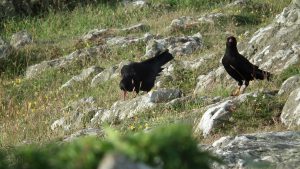 Choughs are once again breeding in the Roseland area, probably the first time they have done so since the 1820s.

The male has been resident in the area since 2013, and he was joined by a young female in late March.  This female originates from the Lizard (2015) and what makes their story even more remarkable is that she spent the winter in the St Just in Penwith area, so quite a journey to get to the Roseland – AND she successfully fledged three chicks – it is pretty much unheard of for a one year old to breed. 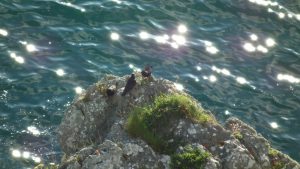 Speaking to Roseland Online, RSPB officer Claire Mucklow said “There were three chicks, but one has been predated by a peregrine – this is quite usual, choughs like other members of the crow family suffer high mortality rates in their first year.  Choughs can begin to breed at two years old but this season one-year-old birds have successfully reared young, an extremely rare event barely documented before.

“Another newcomer has joined the Cornish population, demonstrating movement between Brittany, Cornwall, Ireland and Wales is increasingly regular. New arrivals and their offspring are important to the health of the resident breeding population. 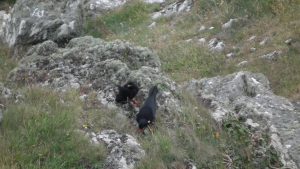 “Three choughs, now known to have come from Ireland, made the surprise re-appearance in 2001 – three decades after the last surviving chough had been seen in Cornwall”.

To keep the choughs safe the RSPB don’t publicise their exact breeding location.