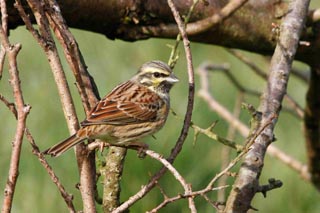 After the successes built up over the past six years, leading to a very successful year in 2011, when the breeding population jumped quite dramatically by 75{c8c3b3d140ed11cb7662417ff7b2dc686ffa9c2daf0848ac14f76e68f36d0c20}, and saw lots of youngsters successfully fledge, 2012 is probably best summed up as being a rather challenging year to say the least! However, it has also been a particularly significant year – one marked by the milestone event of attaining the target level of up to 40 breeding pairs – a population considered to be one that will, hopefully, prove self-sustaining for the species on the peninsula.

With the species’ origins more closely centred around the sunny climes of the Mediterranean, a cirl bunting’s life in Cornwall in 2012 could not have been much more removed, as we were about to embark on what was to become the wettest summer for a century. Such conditions would prove a major challenge for all wildlife, not least a species so unaccustomed to such inclement summer weather.

The year started well with record numbers recorded from across the peninsula, with the previous year’s hand-reared birds surviving particularly well. 2011 was the final year of releasing hand-reared birds – a job that has been undertaken with much skill and dedication from the aviculturalist team over the last six years and for whom much credit is deserved. 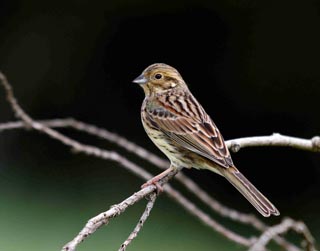 As the winter progressed, several flocks were to be found from many different wintering sites, including a few new ones, extending the known range on the peninsula from near St Anthony in the south to beyond Curgurrell to the north and across to near St Mawes and St Just in the west. Weed-rich stubbles and areas of bird seed mixes provided the attraction, with many of these areas being sown specifically for the benefit of cirls and other farmland birds. As an increasing number of supportive Roseland landowners adopt Environmental Stewardship in the form of HLS, the benefits for cirls are clear to see.

By late February, dispersal from these wintering sites was underway and the task began to track them down to find where territories would be formed. As is typical for the species, most settle close to their wintering areas, though exceptions are not unusual and at least one colour-ringed bird was recorded moving at least 5km from its wintering site.

By mid-May, 39 pairs had been located. The geographical spread of this population was very similar to 2011, with all the known sites from that year being occupied again in 2012. Again, as in 2011, several pairs took up residence adjacent to human habitation, particularly around Gerrans and Portscatho, where the rattling song of rival males was frequently heard on a morning stroll. For one particularly territorial bird, it was the sight of his own reflection that led to aggressive behaviour taken out on the wing mirror of one local’s car – see pic. Other areas were colonised for the first time and will, hopefully, aid the spread of the population across the peninsula. Despite the lack of decent spring weather all pairs soon settled in to breeding behaviour. 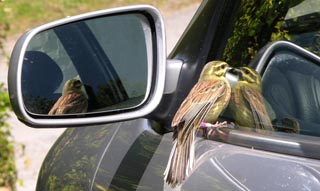 The arrival of June was not accompanied by an upturn in the weather. Rain followed yet more rain, with not a week going by where conditions remained favourable for adults to feed their hungry chicks. As a consequence, it was not until the latter half of the month that the first fledged broods of the year were seen – more than a month later than is typical.

After more unseasonal wet weather in July, conditions in August improved slightly to enable several more broods to fledge, though it was also clear that several of the 44 pairs were cutting their losses and calling it ‘a day’ before the ‘summer’ was over. As is typical, a few pairs continued breeding in to September and helped raise the fledgling count to approximately 65 for the year. Though a relatively low rate of productivity, it is hoped that the population next year will not be too badly affected and that given more-favourable weather, it will continue to rise. Furthermore, with the population being comprised of an ever-increasing percentage of wild-bred birds, it can be expected that the population will be more robust and productive compared to the original one formed from hand-reared stock.

Work on the project continues and although no more releases of hand-reared birds are anticipated, the monitoring of the birds, as well as work within the local farming community will continue. We are, as always, indebted to the help and support we receive from the local community and the dedicated team of staff and volunteers who keep a close eye on the birds throughout the year.