Ships That Don’t Pass In The Night 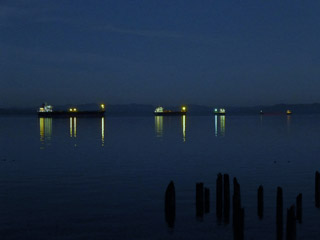 Frequently when I go to bed at night I look out of my window and can see a line of lights down to the south west. These are ship anchored in the Coverack anchorage, sometimes a couple sometimes seven or eight. You can see them in daylight too if the visibility is good, the spire of St Keverne church sticking up on the land behind them. Why are these ships there? They come and go, may stay a couple of weeks, maybe just overnight, but there is a regular turnover.

I have spoken before about ’Lands End for Orders’ a traditional order given to a ship’s master by his owners when he loads and leaves port. The old Lloyds Signal Station is long gone and maybe they don’t even use that phrase now, just give him a chart reference. The principal is the same. Bulk Carriers, ships that load with a commodity into cavernous holds, or liquid carriers (tankers) may take several weeks to get from their loading port to Europe and the market for their goods is volatile.

The price for iron ore or oil, for example, may change while the ship is on voyage and a better price may, for example, may be obtained in Rotterdam than in Brest so the ship heads for Europe and the owners will radio a discharge port as it reaches the English Channel. Mostly, of course, modern communications will enable this to be done while the ship is underway but if you think back a few years to the last major oil shortage we had tankers stacked up along our coastline while the owners watched the price rise!

It is more likely that these ships will be empty and are waiting for a cargo. They will wait in the shelter of The Lizard until the owner finds one and then they will be told a destination. These are the long term waiters. Those of us who use the NCI Lookout can remember a few years back when we had a large empty car carrier parked a few hundred yards off the cliffs for weeks. 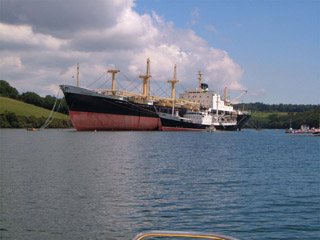 Refrigerated ships have a seasonal demand. ‘Reefers’ is the general term for these vessels which carry any cargo which needs to be kept cold e.g. meat, fruit, vegetables. Within that bracket there are definite types as a ship designed to carry bananas would not normally be used to carry meat. There is a fruit season and when it is over surplus ships, usually the elderly ones, will be laid up until the peak of next demand.

These are the ships which are sometimes laid up in the Fal above King Harry ferry and they might also wait in the Coverack anchorage until they can be shifted up river. Then there may be ships awaiting a berth in Falmouth Docks. Whatever the reason the anchorage of the ship owners choice is off Coverack – because its free! Falmouth Harbour anchorage is divided into sections, inner roughly inside of Black Rock and outer defined by a line roughly Helford to Zone Point.

Anchor in one of these and the Harbour Commissioners charge, which is reasonable, but parking a ship is not cheap. That is why many ships chose to use the Coverack anchorage or up the coast towards Portscatho which is free. Ships which need to bunker or to empty their tanks prior to dry dock will anchor in the outer section, weather permitting, and the supply tanker will come out to them.

I used to be puzzled by the fact that from where I live at Treviskey I can see ships anchored off Coverack whereas I could not see them from the NCI Lookout which is much nearer. From neither place can one see ships anchored in the outer harbour. The reason, of course, is that from my house Nare Head is in the way and from the Lookout we are blocked by the land mass of Porthmellin Head. The whole business of how far you can see out to sea is quite complicated. Imagine yourself standing on a beach at the water’s edge looking for a floating piece of paper out at sea. You are 5ft 8ins in height. 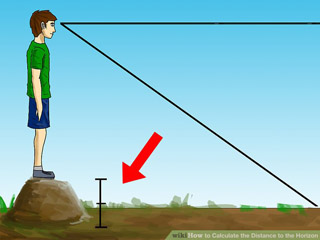 You can see the flat piece of floating paper at 3 miles. Beyond that it would be out of sight over the horizon. However raise the height of the object you are looking at and the distance you can see it dramatically increases. Make it a power boat 5ft high and you will be able to see the top of it at a distance of about 5 ½ miles but its waterline will be well out of sight. We are talking nautical miles, by the way – 2000 yards. There is an equation to calculate the horizon, our old friend Euclid again with Pythogaras. In feet it’s 1.17 times the square root of your eye height above sea level. For those of us whose maths is not up to it there is a table set out in most nautical almanacs.

Our Lookout is 65 feet above sea level and the table in Reed’s Nautical tells me I can see that the horizon 9.3 miles. What I can actually see, though, is a bit more as that is from the Lookout elevation at ground level. I need to add my eye height. So the actual horizon as I sit in the Lookout is about 11 miles. I said it was complicated! Don’t go away though because there I haven’t finished. Remember how when you stood on the beach you could not see the piece of paper but you could see the top of the motor cruiser? The same applies to us in the Lookout. A large container ship will easily be 130ft high, twice the height of the Lookout. To work out the theoretical distance at which you could see his topsides you must take the visibility from the Lookout (9.3 miles) plus twice that distance as he is twice as high. My calculator says that is 30miles!

Let’s come back from theory to what is practical. You have to remember that the governing factor will always be the clarity of the day. Many times we struggle to see Dodman Point which is only about 8 miles away. Then you must take into account size – the smaller the object the more difficult it is to see. A ship’s topsides are quite small when seen out on the horizon But on those rare, crystal days, we can see ships making their way down Channel to pass outside Lizard Point, clearing it by a couple of miles. Falmouth to Lizard is about 18 miles so, while their waterline is out of sight, their topsides are visible.

The lights I can see are usually orange because ship’s deck lights are the same type as most street lights. They will not carry navigation lights as they are lit up like Christmas trees anyway. Sometimes though I see bright white lights in various places out at sea. These will be the deck lights of fishing boats. As they work all night, dropping nets, hauling, gutting etc, they naturally want to see what they are doing so they carry big white lights in addition to the normal navigation lights. These are the yachtsman’s nightmare! Because the white lights are so bright it is impossible to see their navigation lights. You know that 500 tons of nasty steel boat is there but you have no idea which way he is facing, which way he is going, or which way his nets run.

To make matters worse they will often work in pairs, perhaps a mile apart, with a net between them. You try to go round them and find the bearing has not changed – they are moving the same way you are! All the time you are getting closer and the course change you have to make is getting bigger. If you are sailing it may not be possible to move in the right direction as the wind will not allow it, so it means engine on. Then suddenly the gap between the lights widens and you realise they were not working as a pair but they are two separate boats so you could have passed between them in the first place!

Lights at sea at night are, of course, essential and there is nothing better than a clear dark night, the re-assuring reflection of your red and green on the rigging, and the sight of the red and white lights of a ship as it passes a safe two miles ahead of you. You hear the deep rumble of its engine and, if you are lucky, see the fluorescent swirl of water as a dolphin surfaces alongside.

As we have no mains electricity in the Lookout we don’t work in the dark. In some ways it is a shame as we never experience the magic of the sea at night. On second thoughts it is probably just as well – getting there on the Coast Path in the dark would be a hazardous experience! But there is no reason why you should not get out there as a Watchkeeper during the day. It only takes a phone call to Sue on 01872-530500 or Chris on 01326-270681 to find out all about it. It is not terribly demanding, almost anyone can do it, but, like most voluntary work, it does take a certain amount of dedication.

Pictures from Wikipedia and personal collection