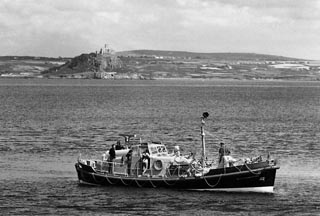 I write this on the anniversary of the disaster in 1981 of the Penlee Lifeboat ‘Solomon Browne’. Sixteen people died in the attempted rescue of the crew of the ‘Union Star’ of which eight were the Lifeboat Crew.  If this appears as intended on 1st February, 2014, it will be the centenary of another famous wreck along our shores. On that date in 1914, on a freezing cold winters night, the German barque ‘Hera’ crashed ashore at the Gull Rock off Nare Head.

Nineteen men died of exposure and drowning before the last five were reused by the Falmouth Lifeboat whose crew had rowed from Falmouth in appalling conditions because a Coastguard had seen a flare. Let us remember that all of these Lifeboat Crewmen were volunteers – they did not have to be there. It was not their job, they were not paid. They had no obligation to anyone save that which they believed they owed to fellow seamen. 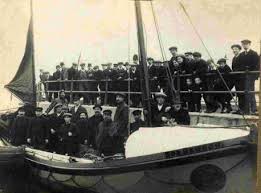 The ‘Hera’ crew are buried in Veryan Churchyard and on the weekend of 1st and 2nd February, 2014, a special event, including Requiem Mass, will be held in the Church.

The coast of the British Isles is littered with wreck sites. Not only were we a great industrial nation in the days of sail but the Islands stand at the entrance portal to Continental Europe. All maritime traffic to and from the ports has to pass close by our shores and in the days of sail, when finding your position relied entirely on what you could see, many ships came to grief because they did not know where they were.

This problem of getting lost, has exercised the minds of mariners since the first man pushed off from the shore in what was probably a skin boat. Early on it was recognised that, at night, some sort of light was the answer, hence beacons being lit on shore or on the arms of a quay. The first known lighthouse was started by the Egyptian ruler Ptolomy 1 at Alexandria, and was completed in about 280BC by his son, also a Ptolomy. This was a tall stone structure which had a fire beacon lit at the top and became one of the Seven Wonders of the World. Over the centuries many more were built around the world and their history forms a fascinating study in itself.

But it was equally important, though easier, to know where you were in daylight. Local people would know their landmarks so they had little trouble, but what of strangers? The British Admiralty hit upon one solution. They were already making charts for the use of the Navy and these were available to commercial British shipping. If you look at an old Admiralty chart you will see a picture of the coastline drawn along the bottom. This was the view from certain point on the chart, that point also being indicated.

The purpose of this was to assist landfall and during the 19th century in particular Naval Officers were encouraged to draw these ‘scenes’ and indicate outstanding features. The Daymark was born, a marker that was easily identified on the shore and a compass bearing could then give you an exact position line. Or they could identify one headland from another. Often from the sea one cliff top looks, at a distance, much like its neighbour. These old charts are masterpieces of the cartographers art, not coloured as today’s, but in shades of grey and white with far more soundings than we see today.

Favourite marks were church spires and Gerrans Church Spire is prominent on early charts of our waters, shown on a background drawing of the coast. There is a large white stone standing on Stepper Point at Padstow and the south Irish Coast is peppered with them, anything from tall, old stone gateposts to the iron statue of a man. On a good day we can see one from our lookout – the stone cross on the top of Dodman. 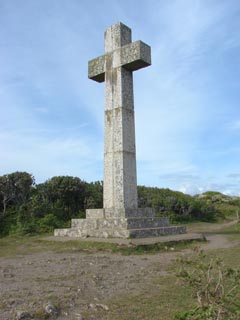 It was erected in 1896 by Rev. Martin to identify the headland. It would appear, however, that the Good Lord did not appreciate his efforts as, in 1897, he threw a thunderbolt at it and broke it in half. Undeterred the good clergyman had it stuck back together and then frustrated his Maker by providing a lightening conductor. The cross has stood ever since but the join of the repair can clearly be seen.

Further east we have the prominent square red and white tower of the Daymark on Gribben Head, erected in  1832 by Trinity House. It is said that this was done following the wreck of two French sailing ships at Portholland. They were heading for Fowey and they mistook Dodman for Gribben. By the time they realised their mistake it was too late and they drove ashore.

All these details are still marked today on charts but a full sized Admiralty Chart is 46 inches by 28 inches and can really only be spread out properly on a ship where a chart table is big enough. Continual folding is not a good idea as Sod’s Law says that the resulting crease will be just where that vital buoy will be that you are trying to find on a dark night. They produce smaller ones and harbour plans especially aimed at yachtsmen and it is this type that we use in the lookout, big enough to cover more than the area we can see but small enough to fit on our limited desk top.

The chart, which may often sit unused for the whole of a watch, is vital to our work. Most of our  ‘customers’ are within about two miles of the Lookout and, from our elevated position and with our large telescope or binoculars we can see what they are doing and satisfy ourselves that they are in no danger. At two miles our big telescope is powerful enough for us to read the sail numbers and work out how many people seem to be on board. That is fine for a yacht or even small boat. But drop a man overboard and the situation changes dramatically. 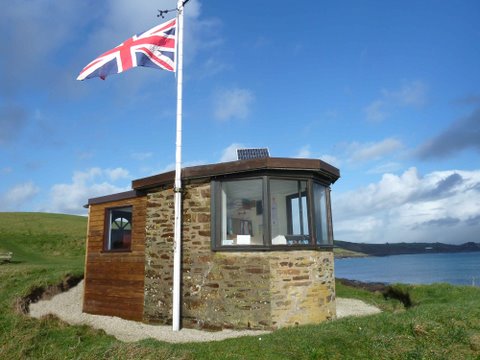 The large blob becomes a very small blob and as it drifts away from the parent vessel it will be invisible to the naked eye. If we can’t see it from our elevation then the crew RNLI rib, bouncing up and down at sea level, will have no chance. Even a helicopter arriving on the scene will have to spend vital minutes search the bay to find its target. We, however, know where the casualty is, can watch it with our large and steady telescope and can plot the position on our chart. This is one of the skills we need to acquire. We are the people who will raise the alarm by telephoning the MRCC at Falmouth.

It is no good simply saying, ‘There is a man in the water in Veryan Bay and I think he is in trouble’. The Coastguard will want to know where in the Bay, that is they will want the co-ordinates, the intersection of lines of Latitude and Longitude that pinpoints the spot. Our visual area covers Gerrans and Veryan Bays and is large, from Nare Head to Greeb Point so an exact position of the casualty will give boat or helicopter a place to head for. After that we can direct them more precisely till they see their object.

All of these skills are taught and practiced during the winter at our monthly training sessions at Portscatho. It’s not dry as dust learning but done with a lot of laughter and wisecracks but, nevertheless, all volunteers realise that to be proficient can save someone’s life. So we learn. To make it more graphic we have speakers from time to time such as Search and Rescue Pilots, the Border Agency and weather experts who usually bring along video recordings to illustrate their work.

They never ‘talk down’ to us and we are always left with the impression that, volunteers though we are, we are an important cog in the Rescue Machine. Come along and see what goes on. If you want to ring Pat Rigley beforehand his number is 01872501838, but you don’t need to. If you have a spare evening the sessions are first Wednesday of the month at 7pm in Portscatho Memorial Hall. Not this January though. The first Wednesday is New Years Day. We are dedicated but not that dedicated! January Meeting will be on 9th.