‘t’ain’t No Good Fighting The Tide, My Son 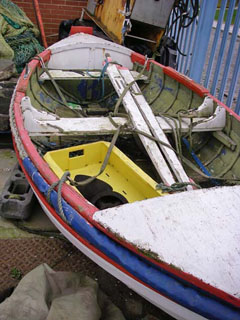 I bought our first boat in 1968 and, apart from short periods, have had one ever since. When I started we had no money and joined the community of impecunious sailors who sailed what they could afford. Old ships lifeboats were popular as there still plenty of wooden ones about, strong seaworthy, though many sailed like a pregnant cow.

Seaworthiness was the prime condition for learners, it always is, so that when you make your many mistakes the boat will look after you. No radios, no flares, no speed log (couldn’t afford them), no GPS (not yet invented) just a chart and an ex-RAF compass. But you couldn’t get lost – out of the river, turn left, England to port, Wales to starboard, Ireland in front. No rocks, just nasty sandbanks and a couple of islands to bump. But the Bristol Channel has two things – a huge tide and mud.

The Channel must have been Donald Swann’s inspiration when he wrote ‘Mud, Mud, Glorious Mud’ and the tide is the second highest in the world, only beaten by the Bay of Fundy in Canada. A big Bristol Channel tide will reach 14 metres (about 46 feet) while here at Falmouth we have a maximum tide of about 6 metres (just under 20ft). Because that huge amount of water is rushing to get in and out of a funnel of land it creates a fast and powerful tide becoming, as it narrows to the River, the Severn Bore. At Swansea a tide of six knots is not unusual and nearer the mouth, Ilfracombe, the usual spring rate is 4 – 5 knots. 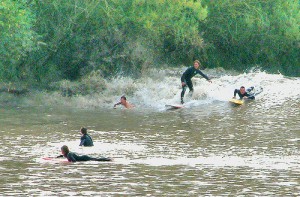 This gave problems to sailors of old as their sailing ships could not make progress against a foul tide. The average speed of a fast sailing clipper of the 1800’s was about fifteen knots but this needed a large area of open water without obstructions. In the confines of the Bristol Channel 8 knots would be more practical as the waterway narrowed. But few Clippers went to Swansea or Bristol.

Here the maids of work among larger vessels were the fully rigged Ships, Barques and Barquetines, square riggers built for cargo carrying capacity rather than speed, who would find that, tide against them, they were often standing still or even going backwards! The local traffic adapted accordingly. Barges, wherries and trows were nearly flat bottomed to wriggle up rivers. Small Brigs, Brigantines and Schooners carried cargoes to harbours where they could sit on the bottom as the tide went out. Schooners usually needed a wall to lean against but Brigs were sufficiently round bottomed that they could lie on sand with only a small amount of heel.

Incidentally, as a throw away line, only a three masted vessel can be called a  ‘Ship’. Everything else is, technically, called by its class.

Knowing they could not fight the tide these small trading vessels planned their passages in the Channel around them. Depending on which way you were going you started an hour before low or high water when the tide was weaker. You would then ride the escalator at ever increasing speed  for about three hours then slower for three before you had to stop. If the distance was right that time would see you to your destination and, if going up-Channel, you could enter the port and discharge.

Going down you arrived at low water and would probably have to wait for enough water to enter. If you could not reach your destination you would tuck in behind some small headland or bay, anchor, and  wait the tide out. The Channel is littered with tiny anchorages which the old timers used, some not very obvious, but a quirk of the tidal stream threw the water away and would give you a quiet and peaceful stay.

Everywhere in the country it was not only the ports like Falmouth and Bristol which accepted cargo. Road communication was so bad that often the only way to get goods to a small town or village was by sea. This caused the popularity of small vessels which could sit on the bottom when the tide went out and discharge their cargoes into horse drawn carts which could walk out to the beached ship to be loaded. 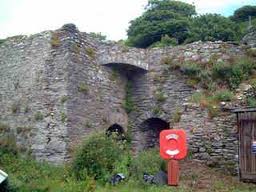 There are  pictures of sailing ships beached in Portloe to offload, essential supplies for the village and it surrounding farms. A roadway is still just visible in St Just Pool when the tide is out which was used to get horses and carts out across the mud to waiting vessels. There are little forgotten harbours still existing in the Bristol Channel which now only see the occasional adventurous yacht. Farm produce in particular was ‘exported’ in this way and there was a continual agricultural demand for quicklime.

Limestone was carried by a small vessel to a beach where it was off loaded and burnt ‘on site’ in a kiln and then transported to the farms. This was done throughout the country and there must be hundreds of the old kilns still surviving in various states of repair. There are fine examples at Portholland where the proximity of large fish sheds tells us of the amount of industry which went on in what is now something of a backwater.

All of this was dependent on the tide. Men used its presence to suit their purposes. It was something you had to live with if you were a seaman so you did not fight it you adapted your business to fit round it. In  the Bristol Channel, timed right, and it could cut your journey time in half. Around the coast it enabled you to bring in goods to a nearby convenient point, cutting costs and preventing the damage caused by jolting along unmade roads. Used properly it was your friend – mis-used it could drown you. 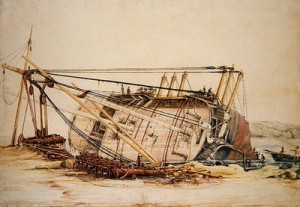 Times haven’t changed, it’s the same today. We don’t burn lime on our beaches but families flock in summer to soak up the sun and dabble in the water. Brigs don’t lie on our beaches but sailboards do. We do not now consider if the surf will be too high to lie aground in safety but whether the waves will be big enough to surf. So our beach ‘behaviour’ is still governed by the state of the tide – and it can still be our friend or our enemy.

Use it sensibly and it is to be enjoyed. Be unlucky and it may carry you in to trouble. In our NCI training sessions we learn about tides and the effect they can have on any incident in which we may become involved. True, close in,  say the line from Greeb to Nare, tidal streams are weak and anyone in trouble in the water is going to be more effected by wind than by tide. The main stream runs outside of that line, not generally more than about two knots, but enough – especially if you are down tide of the Whelps!

We need to know about tides as well as the wind, the swell, how to raise the alarm, what to do when we have done it and quite a few other bits and pieces. All are covered in our Training Sessions. They are not difficult or complicated – anyone can learn what is needed. Why not come along and see. Ring this number and speak to Pat Rigley – 01872 501838

Pictures by courtesy of Wikipedia and Destination Cornwall