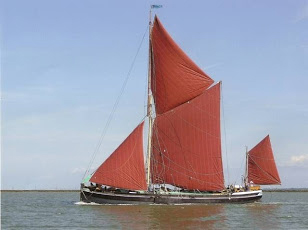 Well, we have opened up for another season. We are now able to man the Lookout for an extra day each week, Wednesdays, thanks to the magnificent response to our various appeals for more volunteers. And we could do with some more – so come and see what we do. The telephone number to ring will be at the end of this writing

It’s been a good winter for us, or perhaps I should say better than many people had. Our Lookout survived the winter storms, our winter Meetings were well attended and produced a lot of extra help from our new arrivals. These have pitched in with a will. showing that you do not even have to be qualified as a Watchkeeper to be able to participate in keeping the Lookout going. Our winter maintenance and improvement programmes have been well and truly dealt with.

I did my first watch a couple of Sundays ago, a bad day to start the Season. It was pouring with rain as I made my way out along the Coast Path, avoiding the new landslip just by the gate, and arriving somewhat moist at the Lookout. It was one of those days when you could barely see Nare Head, the Force Six wind beating the rain against the glass so it ran down in streaks, and I appeared to be the last survivor on Earth. Never say I don’t tell you we get some rough with the smooth! My first watch of the season I used it to refresh my mind on what was there, what to do, what to write, and read my way through the Health and Safety Instructions.

These seem to become longer each year. I know they are deemed necessary and people do extremely silly things but, to my generation, so much of it is basic commonsense that it seems superfluous. But among the verbiage even I could find nuggets of value. For example precautions to be taken if called upon to deal with a lost/found child – particularly a found one. Many people’s immediate reaction is to take it in and comfort it. But such is the world we live in today that a very innocent and charitable move can be construed as having a sinister purpose. So our instructions are designed to protect us – never, if possible, to be alone with the child. Always tell Coastguard immediately that you have one in the Lookout. Write things down. It’s so easy to let your compassion rule your head.

Another good rule is don’t be in the Lookout without telling someone you are there, be it your ‘buddy’ at St Agnes Head, or perhaps Patrick at home should you be down there for any reason but watch keeping. One reason might be maintenance. If you are alone don’t climb up on the bench or on a ladder. Our Lookout is very isolated, especially in winter, and a slip could leave you lying on the floor, unable to get up, and no one to help you.

So, after, much muttering to myself, I recognised the need for this advice and duly signed to say I had read them. Apart from anything else, should something serious happen in the way of an accident it would be Patrick’s head on the block, not mine, and that is not fair. I might not be in a position to care what happened! And by signing on the dotted line I have kept Peter, our Health and Safety Officer, happy. 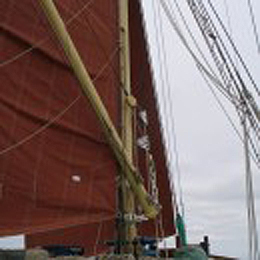 Winter training included ship recognition. So far as we are concerned this is confined to sailing ship rigs as large ships are usually simply a line on the skyline. But thinking of if it reminded me of one beautiful visitor which visits Falmouth about once a year – a Thames Sailing Barge. These magnificent vessels seen from a distance are hard to distinguish from an ordinary gaff sloop. With its sails set the fact that it has no boom is not immediately obvious. Only with glasses can you see the massive sprit running from the foot of the mast to the head of the sail leech, the sail itself being loose footed. For those who don’t know I had better explain a bit.

The gaff is the spar which runs aft at an angle from halfway up the rear of the mast. It supports the mainsail, and any sail set above the gaff is a topsail. The boom is the large spar which comes aft from the foot of the mast and secures the bottom of the mainsail. On most boats the sail is secured along its length and, when dropped, the sail is tied down to the boom to keep it out of the way. A sprit is a very heavy spar which runs from the foot of the mast (as opposed to half way up), at an angle to the top of the sail leech. The leech is the rear edge of any sail. A mizzen sail is set on a lower mast standing at the stern of the vessel. Got all that? Then I will carry on.

The Thames Barge was designed to carry goods from the waters around the Thames Estuary to the Continent and the south and east coasts of England. They were a development of the lighters used to unload ships in the Port of London, swim head barges which were just wood, then steel, floating boxes. The ship would lie alongside a dock on one side and barges would tie up to the other side. The ship could thus unload on both sides at once, twice as fast, and speed is money. Being flat bottomed she could make her way up the side rivers on the rising tide to towns far inland where, flat bottomed, she would sit on the mud to be loaded or unloaded.

The mainsail would then be pulled upwards into the angle where the gaff met the mast and the outer end of the sprit could be used as a crane to handle the cargo. When the tide returned she would sail back again to the sea and on to her delivery port. With topsail, main, jibs and mizzen set she was fast, capable of about twelve knots which, in those days, was fast.. The rig was very tall, designed so that the large, high topsail could catch the breeze above river banks and buildings and so drive her when her lower sales were blanketed. Unloaded they only drew about two feet which also meant they could go where nothing else of their size would float. 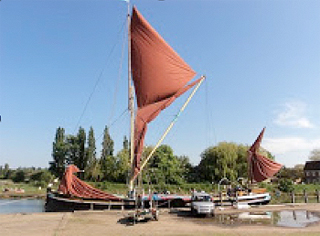 She was flat bottomed, a huge disadvantage in a sailing boat as the purpose of a keel is to grip the water and stop the vessel being driven across the water in whichever direction the wind is blowing, just like a leaf fallen in the water. To get over this she carried lee-boards, massive flat structures like doors, one attached each side of the boat about mid-ships.

They were attached at the top on a pivot which would allow them to be dropped into the water or raised as required. The one furthest away from the wind would be lowered and it would then act as a keel giving the barge a grip on the water, converting the sideways thrust into forward motion. The reason they used the one away from the wind was so it would be forced against the boats side and held in place. If they used the other one the barge would be carried away from the leeboard by the wind and it would break the pivot point.

Their cargoes were many. Stone, bricks, timber, horses, flour, barley – in fact anything a ship could carry. A common cargo from Essex to the Port of London was hay or straw for the numerous carthorses working the London streets. The stack would be built on the deck and the whole thing floated to London. How a bargeman saw round it I have no idea. During the War they were favoured for carrying ammunition and fuel in drums; wood does not create sparks.

They are masterpieces of the boat builders art, extreme examples of functional ability. Problem after problem had been overcome. Though huge, eighty or ninety feet long and twenty feet wide. They weighed about 200 tons and could carry about another eighty tons of cargo. Yet they were able to be handled by two men, often a master and a young adult, though sometimes they carried three men.

To shorten sail they would lower the topsail and, if more canvas was needed to be taken off, they hauled the mainsail up from the clew towards the throat. (Got you there – the clew is the bottom outer corner of the sail, nearest the stern and the throat is the junction of the gaff with the mainmast). It was a one rope, one strong man job, just like raising a window blind. The sprit doubled as a crane, the rig allowed it to sail inland rivers, a huge cargo carrying capacity, good sea ability – it had it all.

They were built of wood, though from the 1930’s onward a some were made of steel. Wood had a big advantage. It lends itself to construction in small two or three man shipyards whereas steel, though lighter, needed specialist skills, bearing it in mind that these were the days of riveted hulls rather than welded. It was said of one small builders yard on the Estuary coast that you could always tell one of theirs if you stood at the bow and looked down the length.

The two sides would be slightly different. The yard was owned by two brothers who would each build one side. No plans were used – they built from memory and by eye. Indeed, builders in general had very little use for plans as the hull construction was tried and tested and did not change. You just ordered one by length! 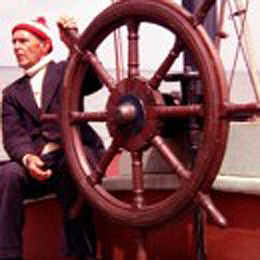 The peak of the barge trade was about 1900 to 1930 and after that there was a steady decline. They served honourably in the war as the wooden hulls were immune to magnetic mines. 30 barges were involved in the Dunkirk evacuation, some were towed across, some used their own engines, some sailed; many never came back After the War the containerisation of cargo traffic, spelt the doom of the barge, the Port of London and the docker . Now there are only about thirty left, a thriving Club of boats in private hands, and we are privileged to have the occasional visitor.

We don’t, of course, deal only with large yachts and sailing craft. These can usually look after themselves and, at the most, need to be kept under observation until help arrives. Our bread and butter are the most vulnerable, the kayaks, swimmers particularly children, small open boats, sailboards and paddle sailboards, RHIBS which run out of fuel and the like. The best weather produces the most likely problems as the sea gets crowded. We could do with more volunteers. That telephone number I promised. Ring Patrick on 01872501838.

Pictures by courtesy of Greg Diddam and Edith May Barge Charters.