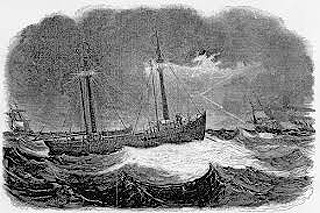 Last month I wrote about lighthouses. This time I want to write about the other signposts of the sea – buoys and lightships. Both of these are used when there is no convenient bit of land or rock on which to stand a lighthouse. The hazard is too soft or too deep so anything used to mark it has to float.

The first lightship was moored at the Nore at the approach to the Thames Estuary in 1730. It’s unlikely owners were Robert Hamlin, an impoverished barber, and David Avery who was a business man who like to invest in small projects. Their idea was to mark the Nore sandbank which lies at the entrance to the Thames estuary, thus also giving a guide to the entrance itself. They would then collect a fee from each passing vessel and thus finance their project and make a profit.

The idea did not go down well with the Brethren of Trinity House. They were created by the grant of a Royal Charter in 1514 and the purpose of the grant was to create a body responsible for safety at sea. Trinity House is a subject of its own but it had been the power behind the creation of most of the lighthouses in the country. They regarded all forms of maritime lighting as their province and contested the right of the businessmen to operate the lightship. After a four year battle in the courts the ownership of the lightship was given to the Brethren, Avery and Hamlin getting compensation.

Lightships in that era had many advantages over a simple buoy. They were large, painted red with white lettering so could be much more easily seen in daylight. Buoys at that time could not be lit so were invisible in the dark. Buoys lit by gas did not arrive until the 1880’s and even then had limited life before requiring a re-fill so needed visits by a tender to maintain the light. Ships on the other hand carried a crew so they could keep the light going no matter what its source of power.

Sometimes things went wrong. To anchor a vessel close to a hazard, often in a busy shipping lane, and leave her out there in all weathers was bound to produce casualties. In 1934 an American lightship off the Nantucket Sands was rammed and sunk by S.S Olympic, sister ship of the Titanic, with the loss of seven crew.

The ship was homing on the lightship’s identification beacon. She found it. The Varne lightship off Dover was involved in a rather bizarre incident in 1981 when a large ship, the Ore Meteor, was being towed by a tug in the English Channel. Visibility was good but the wind was near gale force and the lightship’s crew watched in horror as the tug missed the lightship but the tow followed a different track! The tow cable fouled the lightship and began sawing through her upper works as the towed vessel was pulled into collision. Amazingly the lightship survived though she lost her upper works.

The biggest lightship tragedy was in November 1954 when the South Goodwin ship broke her moorings in a hurricane force gale. The crew of the North Goodwin ship had to watch as their colleagues ship was helplessly driven past. Lightships have no means of propulsion so the crew could do nothing to help themselves.

She was swept onto the Sands, forced over on to her sides and swamped. Her crew had been sheltering in the deckhouse and the door was on the side of the ship which went underwater. The entire crew of seven were lost. The only survivor was Ronald Murton, a scientist with the Ministry of Agriculture and Food, who was on the ship to conduct a survey of migrating birds. He had been in his bunk in a different part of the ship. He got out on deck as she went over and spent the rest of the night clad in his pyjamas clinging to the wreckage. When daylight came a United States helicopter from Manston found and rescued him, the only survivor. 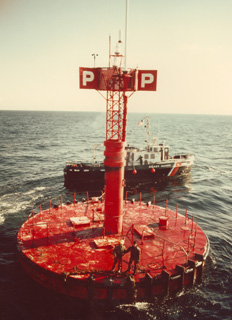 The ships were largely replaced in the early 1970’s by the Large Automatic Navigation Buoys (LANBY). This was another idea which was not as good as it first seemed. They were huge circular, flat, things, about 40 feet across, with a light tower in the middle. Like many other things proper testing of a prototype was not conducted before the replacement programme was well underway. The first indication that all was not well came with the first service schedules when engineers were put onto the buoy.

Anyone who has been at sea and watched a moored buoy will see that they continually rotate back and forth with the sea’s action. So did the LANBY, but whereas the average marker buoy is some 10ft in diameter the LANBYs were 40ft. Simple physics should have shown that, whereas the outer diameter of a conventional buoy had a spinning speed of 3-4 m.p.h. the outer side of a LANBY was at least ten times that. Engineers complained that boarding them was like trying to mount a fairground ride while in motion and that working on them was a nightmare.

With an ordinary buoy a man would cling on to the cage or, more likely, get inside it and feel secure. His vision if he looked out of the casing was of the sea – more or less uniform all round with nothing to tell his brain he was continually rotating. There was no cage on a LANBY, only a central mast with a ladder to reach the light. If he looked out he could see the red outer edge of the buoy against the darker sea and could gauge the speed of rotation.

Not only that but when the rotation reached its limit there would be a short pause and then it would spin back. There was a high incident of sea sickness among engineers. The buoys were phased out in ten years being replaced by solar powered floats. Lessons have been learned – light floats are not circular but catamaran shaped!

Navigation buoys used to come in all shapes and sizes but great strides have been made in the last thirty years to make their shapes uniform even though, by their very use, they have to differ in colour and light characteristics. Their colour marking indicate their purpose and position in daylight and their flash sequence by night. 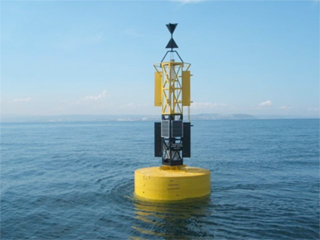 They use the same system as lighthouses, flashing, isophase and occulting with different time sequences. Trinity House maintains some 450 which they ‘own’ and also look after a lot of ‘private’ buoys at harbour entrances, oil rigs, solar farms etc. Buoys have one big advantage – they are very portable. This means they can be dropped anywhere almost instantly to indicate a new hazard like a wreck or a forbidden area.

Though it is common for them to go adrift Trinity House is most efficient in getting them back on site. Despite Robert Southey’s poem there is little evidence to say that the removal of buoys has ever been a problem or that they have been used in deliberate ‘wrecking’. Too difficult to get at and too difficult to profit from the spoils. Sir Ralph is supposed to have cut the bell rope on the Inchcape Rock buoy making it silent. Months later he is back in the area, one foggy night, unable to hear the bell his ship struck the rock and ‘the waves rushed in on every side’. 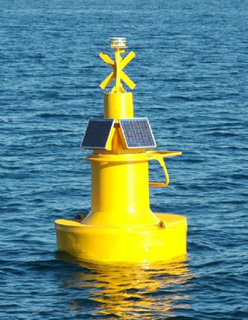 There are no buoys visible from our Lookout except for four yellow buoys out on the horizon which mark the landing area of shells from the gunnery range off Fowey. You need a clear day and good glasses to see them but you can occasionally see the Range Vessel which guards these when firing is in progress.

The ship firing is well hidden behind Dodman Point so you never hear the actual explosions and, as the shells are made of concrete or plastic, you cannot see them land. Sometimes on the radio you hear the warship giving out its warning or talking to the Range Vessel but that is all. The Falmouth harbour buoys are out of our sight behind the land mass of St. Anthony/Greeb and the Manacles buoy is too far away to be visible.

This does not mean we have nothing to do though. Even with no maritime marks to watch over there is plenty to keep our Watchkeeper occupied, especially as summer approaches and the leisure users get in to the water. Even this Easter, the weather still having a chill in the air and the RNLI warning about the low sea temperature, there were many kayaks, small motor boats and yachts out.

There were anglers and people exploring the rocks at low tide, people walking the Coast Path or sitting for picnics. Quite a busy weekend but, at the end of the day, all was safely gathered in and the Watchkeeper shut up at 5pm with the satisfaction of a tour of duty well done. Unfortunately when I closed on Monday I was thinking that there would be no-one there on Tuesday as we do not have enough people to cover every day of the week. Anyone on the water will not have that safety cover if something goes wrong. You could help by joining us. Find out more by speaking to Sue on 01872-530500 or Chris on 01326-270681.