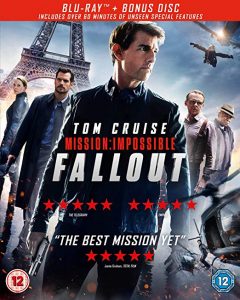 Ethan Hunt (Cruise) and the IMF team join forces with CIA assassin August Walker to prevent a disaster of epic proportions. Arms dealer John Lark and a group of terrorists known as the Apostles plan to use three plutonium cores for a simultaneous nuclear attack on the Vatican, Jerusalem and Mecca, Saudi Arabia. When the weapons go missing, Ethan and his crew find themselves in a desperate race against time to prevent them from falling into the wrong hands.

Undoubtedly the best in the MI series, I don’t feel it lived up to its huge acclaim  by most critics. Sure it’s an action packed, fast moving piece and the story is far stronger than the ones earlier in the MI series, but for me, at least, it’s just another action movie.

Verdict: For MI and action-movie fans, this won’t disappoint, but Bourne Supremacy, it is not. ***

This film will be shown at The Harbour Club, Portscatho, on Monday 10th December