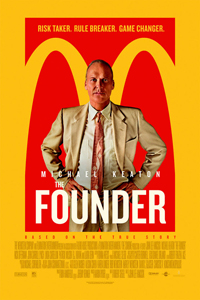 The true story of how Ray Kroc (Keaton), a struggling salesman from Illinois, met Mac (Carroll Lynch) and Dick McDonald (Offerman), who were running a burger operation in 1950s Southern California.

Kroc was impressed by the brothers’ speedy system of making the food and saw franchise potential. Kroc soon manoeuvres himself into a position to be able to pull the company from the brothers and create a multi-billion dollar empire.

This engrossing film shows the struggles and deceit that build empires. Keaton shows his usual excellence as he wages war against institutions and prejudice to fight his way to the top.

Deeper than depicting these fighters as heroes, The Founder shows just how heartless and determined these people have to be to become business icons. A sad reflection on how business really gets done in 21st century.