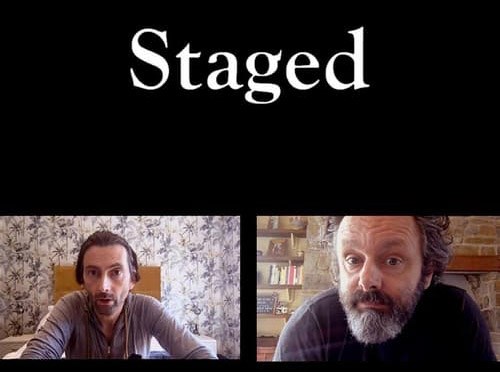 A six-part British television comedy series, set during the COVID-19 pandemic lockdown and filmed using video-conferencing technology. Starring David Tennant and Michael Sheen (with their spouses) it follows these two actors whose (fictitious) West End play has been put on hold due to Covid-19, but whose director (Evans) has persuaded them to carry on rehearsing online.

Truly, I’ve seen so many ads for COVID led ideas and most of them have been awful. As such, I was reluctant to watch yet another. But watch it I did and thanks to Mr Sheen, Tennant and Evans’ unbridled talent (and those of their lockdown partners) it was an absolute delight.

Like us all, the small shifts of events become huge shifts in reality for the lockdown couples and as the story winds on, featuring some incredible cameos, I was addicted. Hilarious, poignant and enjoyable. What more does one want on those long, bleak-TV’d Autumn evenings.

Verdict: An absolute delight and brilliantly concepted and acted by all. *****