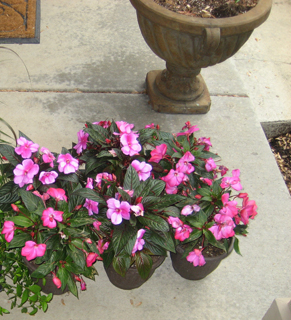 Receiving a telephone call from a friend one always says, ‘How are you?’ Sometimes there is instant regret as the tales of minor ailments persist. But I received a phone call from a good customer of mine in St Mawes. She has a lovely cottage in a narrow back lane with a small but hugely floriferous patio at the front. Her sight is not so good but she ensures that the front area looks colourful all summer and it is much admired and photographed by tourists and locals alike. There are pots of geraniums and begonias, hanging baskets and small shrubs all in an area about 12 x10ft and the back drop is a common climbing fuchsia that adorns the house walls.

So, she rang me and I asked after her health. ‘I am a bit tired she said I was up early this morning. And then the full facts emerge. She awoke at 6.15 am to hear noise on her front patio and around her upper floor windows. She was concerned and knew that it could only be a burglar. Just a little disconcerting when you have failing sight and live on your own. She explained to me that as it was hot so she had nothing on and quickly found a dressing gown and headed down to the front door. Realising she had no chance against a burly burglar she grabbed a granite vase by the front door and headed out vase aloft! Fortunately her sight was good enough to spot the ’burglar’. Her gardener from Veryan scaling the new fence and planting another fuchsia for her at 6.30 in the morning. ’Well I said I’d do it didn’t I?’ 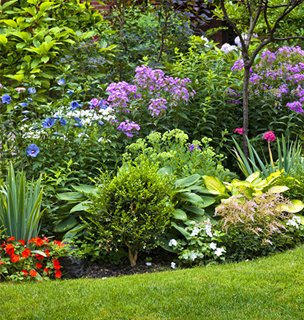 Bless him, the granite vase avoided and the fuchsia planted and watered in by 7am. It’s amazing what you can achieve if you get up early and often that’s before these summer winds start blowing. I sprayed off my driveway at 6.30 the other morning and by 10am it would have been much too windy.

It’s been a fairly good summer so far. A little less wind in July would have helped but the warmth has really brought out some stunning summer colour. Now the task of endless dead heading is done in earnest as we try to extend the flowering season of herbaceous perennials and summer annuals.

Weeding has not been too arduous a task this year but it needs doing really carefully. It now turns from a chore to a treasure hunt in the perennial borders. Try and do the job by hand as many flowering plants will seed themselves in the borders. These plants are equipped to produce thousands of seeds and some will seed themselves inappropriately. Sun loving plants may land in the shade or small plants lose their ability to grow amongst the adult perennials in the border. So when you are weeding look out for self seeders. 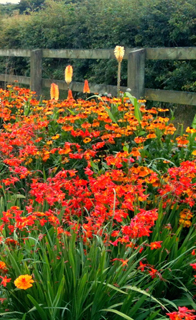 The foxgloves, poppies, aquilegia and the perennial verbenas. Some plants self-seed better than others, the so called red valerian (centranthus), pot marigolds, the welsh poppies, opium poppies and indeed hellebores. It’s worth collecting them and potting up when they are a fair size but be prepared for a few to keel over and not recover. You will find that many that have self-set don’t come true to the parent and you may be lucky enough to find that the more promiscuous have cross pollinated and sent up something quite unusual or even very special.

There has been huge demand this year for echium pininana plants. Tourists particularly have seen this year’s spectacular displays. They have been superb because of the mild winter. They succumb only to prolonged frost and don’t much care for constant biting wind (a bit like me!). The echium of all varieties have the ability to set literally tens of thousands of seeds.

It is also known that a few of these will emerge for the following year but the seed has the ability to remain in the ground for at least ten years and to emerge as it thinks the time is right and to conserve itself in the process. If you have seedlings that are not in the correct place then be sure to move them when they are really quite small, no more than 2-3 “. They do not like pots and do not like being moved when they get much bigger. They are generally biennials so you are looking for two milder winters. The first for the plant to emerge to a good height with leaves and then to flower in its second year and then die. 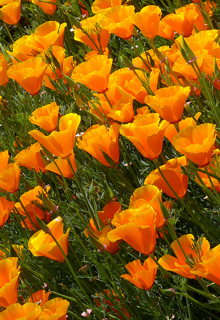 If you have open packets of seeds of the half hardy annuals like escholtzia, poached egg plant, or indeed any of the so called ‘wild flowers’ try using them up this month to provide a late batch of flowering plants in autumn containers.

Other than all that we are mowing and picking this month. The same principle applies to veg as flowers. All they are programmed to do is produce seed and therefore produce the next generation. By picking peas, beans, lettuce in fact any veg you are effectively dead heading. If the plant loses its beans to your pot its natural reaction is to say ‘heck I must produce more seed’, and hence you have more beans. It will give up before you do hopefully!

Take a good look too at plants that will need moving or splitting in the autumn. Put labels on carefully so that you remember as in the autumn it can be more confusing when you have lost leaves and flowers.

Keep looking around the garden now to see what may be available for the Veryan Open autumn show. Interesting that the hydrangeas came so early this year, the dahlias are about on time I think and perhaps even the chrysanths.

These articles are often written over a period of days as the mood or time takes me. And between the beginning and the end of this month’s tome we have had a spectacular run of low pressure and I have lost an echium that I was hoping would seed. But the hydrangeas that were drying out have loved it and the wheat in my fields has been less than impressed (in part compressed!)That’s the joy of gardening, swings, roundabouts and hopefully silver linings.