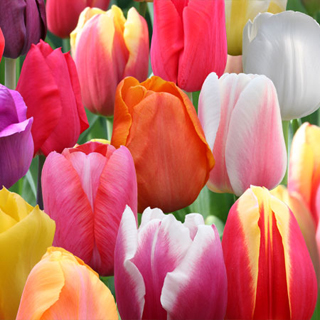 Tulips – I hope you haven’t planted them yet! The first two weeks of November are the very best time to plant. Yes, I know the bulbs have been available since mid- August but if planted too early you run the very real risk of tulip fire disease for which there is no cure! I usually plant mine in pots for the terrace with plenty of grit under the bulbs as they do not tolerate soggy bottoms. When they have completely died down I put them in a space in the garden.

The choice of that space is actually critical if you want a display from year to year. Even if you are planting now into the garden think carefully. They come up and flower when there is little else around in the border but they need to bake during the summer so if they are surrounded by vegetation throughout the summer months they may just rot or give a poor display very often consisting of leaves only! If you can plant them next to irises which will not shade them and enjoy similar conditions then you are on to a winner for years to come. Many summer bulbs can be planted now too including lilies and don’t forget those fabulous spring alliums, still time to get them in.

That description of tulips and irises reminds me of a lecture I was asked to give to St Mawes Garden Society . (‘Lecture’ is a rather grand description, a talk followed by questions is more apt). The subject was companion planting. I have been fascinated by this since being given Bob Flowerdew’s book on this subject as a valued Christmas present some years ago. 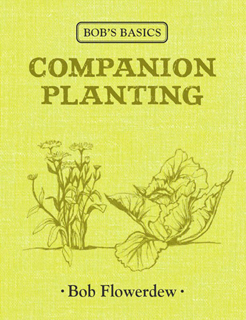 Now is the time of year when you are shifting stuff in the herbaceous borders and planning next year’s veg and you can really give some consideration to companion planting for next season. Some of the information I have gleaned and passed on in St Mawes is scientifically proven some is just tried and tested methods which work for some and not for others and some of these methods work but the scientists do not know why just yet.

The whole essence of this type of planting puts plants together that may assist each other. That may be by attracting beneficial insects, naturally regulating pests, repelling harmful insects, providing nutrients and perhaps just by providing the correct climate. For example, for every one foot of vertical hedge you will achieve about ten foot of protection for plants from the wind. So a six foot hedge will provide protection in its lee for about 60foot. Quite impressive.

You also probably know that by planting a member of the allium family (onions) next to fruit trees tomatoes, peppers or any brassica and probably carrots, you will repel, or at least distract slugs, aphids, carrot fly and cabbage worms. But avoid putting beans, peas or parsley near to the alliums, your yield and quality will be affected. If, like me you have cabbages heavily chewed by caterpillars then plant hyssop next to the cabbages next year – the cabbage white butterfly apparently detests the smell – I must try that one!

Runner beans and beetroot stunt each other’s growth but beetroot leaves as they die add 25{c8c3b3d140ed11cb7662417ff7b2dc686ffa9c2daf0848ac14f76e68f36d0c20} magnesium to the soil. Remember therefore to compost them carefully. Geraniums or pelargoniums planted near to brassicas help to repel cabbage worm. 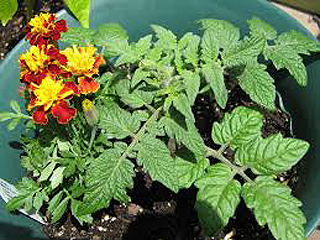 Tomatoes are often planted with marigolds in the greenhouse. But don’t bother with those horrid little bedding marigolds. They are so highly bred even the bees avoid them. Use good old fashioned pot marigolds or French marigolds and they do deter whitefly and aphids. Marigolds are actually the wonder drug plant of companion planting. They produce a pesticidal chemical in their roots so are best planted in the ground where it can exude into the soil. The chemical is so strong it can last for years after the marigolds have gone. The only harm is that they can be too strong for some annual herbs. An old wives’ tale that planting basil with tomatoes enhanced the flavour of tomatoes has been disproven, however, growing tomatoes and basil 10” apart can increase the yield of tomatoes by a significant 20{c8c3b3d140ed11cb7662417ff7b2dc686ffa9c2daf0848ac14f76e68f36d0c20}.

Probably second only to the marigold is any type of mint but particularly the common type. Slugs, aphids, butterflies caterpillars, virtually any common garden pest you can think of dislikes mint. However we all know that it is invasive when planted. I put rows of potted mint up the paths next to the veg beds but I have been told that it is more effective to pick the leaves regularly and scatter them about the veg garden. 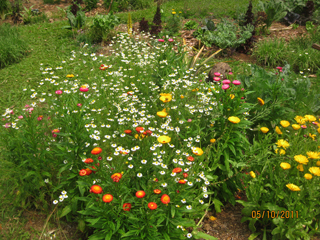 If you have a herb garden be sure to include chamomile. Whilst it can be an unruly little menace it will increase the oil content of many herbs including basil and lavender. But dill planted near to carrots or tomatoes will decrease their yield but increase the yield and quality of cabbages, corn, lettuce, onions and cucumber. And do not plant parsley next to lettuce or onions, they really don’t like each other. Indeed parsley is well known to inhibit the germination of many veg plant seeds. Put parsley next to tomatoes, asparagus or corn, they all seem to get on well together.

Phormium, so prevalent in our gardens has an oil in its root that protects nearly all root vegetables from underground pests like wire worm. Wire worm often attacks newly planted potato patches. There was a time when Mike grew potatoes on a vast commercial scale. He had so many wire worms we wondered whether they could be sold as a deep fried delicacy to local restaurants. If only we had known, surrounding the whole field with Phormium would have saved the day!

Lupins are a member of the bean family, they host bacteria in their roots which fix nitrogen in the soil from the air. They therefore provide the nitrogen required for their surrounding plants – no artificial fertilisers therefore being needed. 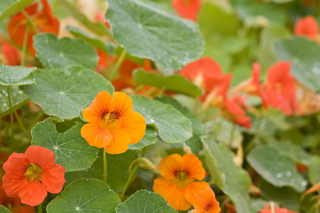 Nasturtiums act as a companion trap crop. Plant them near to anything that you want to keep aphids away from. And caterpillars prefer nasturtiums to cabbages any day! Now sunflowers we know attract beneficial insects, but if you have a nest nearby of ants they will herd aphids on to sunflowers thus probably destroying the sunflowers but keeping them off neighbouring plants. Sometimes you just can’t win!

If your space is short grow runner beans up the sweet corn stalks, tricky to pick either, but they seem to like each other and the corn provides a terrific support. Plant marrow or pumpkin underneath and you are back to the ‘three sisters’ planting practised by the indigenous Americans thousands of years ago.

The detail of companion planting is vast and discoveries are constantly being made and I have only had a small opportunity here to give you a flavour of advice and pit falls. But it is a fascinating subject and it isn’t long before you realise how much companion planting we do without really realising it. Just planting a white border is a form of this type of planting – companions of colour – or a clematis or rose up a tree as support. The best advice I can give is to read up on it in detail and never plant a walnut tree, apparently virtually every other plant in the garden would rather avoid it!