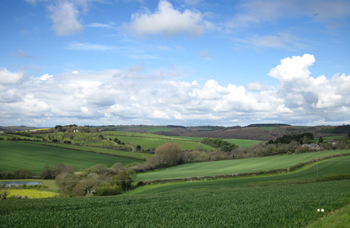 Whilst the Roseland is no tropical island paradise, it undoubtedly lends its outstanding natural beauty and biodiversity to a stunning range of habitats contained within a very small space, made possible by its unique geography. As a conservation volunteer I have the opportunity to discover more of this landscape than perhaps most.

Towards the end of April I visited an idyllic area of private farmland at Trethella, Ruan Lanihorne. The purpose of the visit was to survey the farm for all birdlife as part of the RSPB’s Volunteer and Farm Alliance scheme. The scheme helps give farmers an idea of the avifauna present on their land during the main breeding season, and how this knowledge might aid their participation in agri-environment schemes promoted by the government through Natural England. Volunteers taking part in the V&FA scheme make three survey visits from April to June, which ensures we get most of the summer visitor birds listed as well as resident species. It’s a wonderful way to spend 5 or 6 hours of a day. 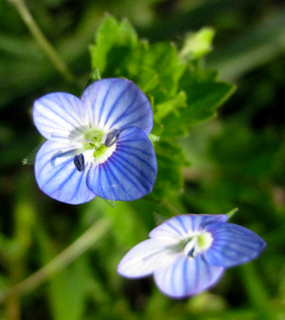 Although Trethella is a small farm, the landscape and habitat are typically very varied, with open hilltops and sheltered, wooded valleys. There are public footpaths across the farm, some marked by DEFRA Consevation Walks signs. Some parts of Trethella border the estuarine saltmarsh of the Ruan river, which comprises the conservationally important Upper Fal Estuary and Woods Site of Special Scientific Interest (SSSI). The biodiversity is rich, attracting many species of avifauna to the resources on offer. This first visit revealed the presence of more breeding Blackcaps than I think I have encountered anywhere before, with Chiffchaffs in full song ever close by. Everywhere you walk measures are in place for nature conservation, from simple nest site provision to generous margins in cropped fields or plantation areas. It’s a delight and i am looking forward to the next visit in May.

Some rather double-edged news arrived late in April. Mary Pollard was given an injured hedgehog to look after. The great news was that this was a large, mature individual, which proves hedgehogs are living in the heart of the Roseland. The downside is that this individual had become the victim of human neglect. Bizzarrely it was fishing net-entangled and, just like a nettie seal, appeared to have become entangled when a juvenile and then matured into its bondage. Some of the netting was already so tight that it was cutting into the skin, as you can see from the images here provided by Mary Pollard. 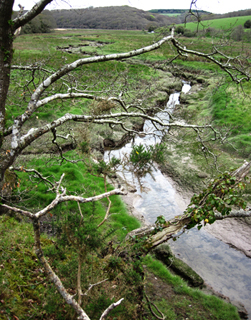 It is distubing to think that not only does accidental fishing net entanglement occur frequently to sea animals but that land animals too fall victim to it in just the same way. This victim is further evidence of man’s carelessness and lack of regard for the natural world we share with other life forms.

Some notes on the nature of predation

Unfortunately the human animal does not just make victims of other animals through simple negligence. Deliberate persecution of wildlife also occurs through a lack of understanding of the ways in which animals have evolved to survive successfully. I witnessed a classic example of this when hearing a neighbour proudly pronouce that they had destroyed a number of magpies in the interest of supporting smaller songbirds, which they felt were under threat from predation.

To understand hard and sometimes unattractive facts of nature it is important to have a basic understanding of the wholly interdependent nature of predator versus prey – the principal driver of evolutionay development and emergence of new species. The fittest prey animal is the one that can evade the predator better than all the others of its kind. In so doing, it passes on those fitness qualities to the next generation and generations thereafter, through its genetic code. In this way, until the predator catches up with the prey’s ability to evade it, the prey will keep on improving its ability to survive and proliferate. It is a constant game of chase and catch up. So, if we remove the pressure of predators on their prey – say, by destroying magpies – we are tampering with the evolutionary development of the prey’s ability to evade detection. Retarding evolutionarily genetic improvements to prey has the potential to lead to undesireable and unforseen wider genetic effects, both within and beyond a single species. Anti-predator behaviour is often costly in terms of energy and other requirements and can therefore be bred out in just a few generations if it is no longer needed. The result of losing anti-predator behaviour can be disastrous to an entire species. You may recall what happened to the Dodo when man stumbled across it. 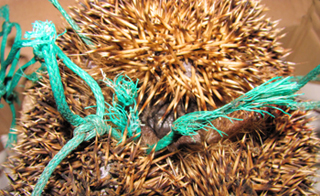 Thus to persecute sentient and intelligent living beings for the sake of their unique evolutionary development is both proposterous and incomprehending of their uniquely evolved behaviours, which have developed to fit perfectly into the complex ecological web of the living landscape. Yes, magpies eat nestlings, and so do sparrowhawks and many other animals, but populations of smaller songbirds (themsleves predators) tend to be strengthened by this behaviour, not threatened, as scientific studies have indicated.

Almost all living organisms are predators and most predators are themselves prey to at least one other life form. This is why we now talk about ecosystems in terms of food webs, not so much about food chains, which over-simplifies what is really going on. Humans can fall prey too, when not engaged in their own unique predation behaviours. Predation is not always pleasant to witness but without it none of us would be here. 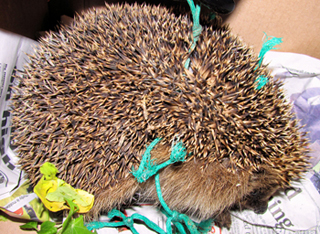 Some things to do for Roseland nature in May

· After some windy wet weather there is going to be a lot more rubbish on the beaches, including many kinds of discarded fishing net and line. It’s time to get out there and get beach cleaning to help prevent animals falling victim to it.

· Coastal homes often have piles of old fishing gear lying about in places where land animals may also fall victim to entanglement like the hog mentioned above. If you have such old stocks then why not have a purge and at the same time see how it can be safely stored if needed for use later.

· Keep your eyes peeled for the hedghogs and send your sightings to Cornwall Mammal Group. If you find a sick or injured hog then the British Hedghog Preservation Society have a list of contacts who can help and advise. The Society want the public’s help in finding out the potential effects of climate change on hedgehogs, so why not send them your sighting records for their Hibernation Survey?.