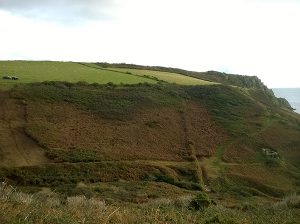 A challenging project for the Rangers in 2016 was to build, transport and install a replacement footbridge for a very tricky location.

Walkers on the coast path going around Nare Head from the west can cross a trail-blazing  new footbridge above a stream which flows fast down Paradoe valley and into the sea just below Mallet’s Cottage. The South West Coast Path 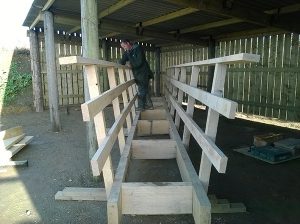 Association funded almost a tonne of oak for this project!

The original bridge was built about 20 years ago but its footings were becoming more vulnerable due to erosion of the banks of the stream during winter storms.  It had to be replaced before another winter.  Good public access to the coast path is a priority for the National Trust and closing the bridge would have meant a long detour for walkers. 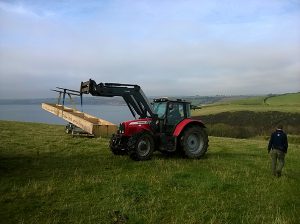 The bridge lies in a narrow spot between two steep cliff paths, an impossible place to build the new, bigger bridge. The Rangers assembled this seven metre long structure under cover in a nearby field, working carefully for five days to achieve a perfect construction. 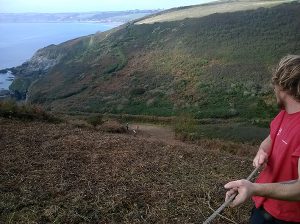 tractor.  Using a front loader he lifted the parts onto a long trailer; the bridge bits were then transported to the field above the valley.

The Rangers had cleared scrub from the area below the field to enable the parts to be lowered smoothly to the valley floor.  This was the most difficult part of the project – with no machines to help other than a simple pulley to allow the spans and other precious pieces to be lowered manually. 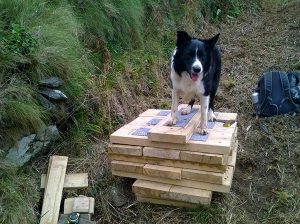 A wooden ‘shoe’ was built around the front of the spans to protect them in their descent – the whole thing looking a bit like a sledge.  It took six people one day to get everything to the valley bottom; next day, two more joined in to help carry the components and tools to site. The old bridge acted as a working platform during the whole process.  It took four days to re-assemble the new bridge above the old one.  The base was fitted with 29 treads, each one a piece of oak with a non-slip grip. 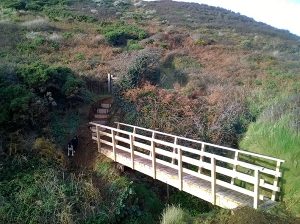