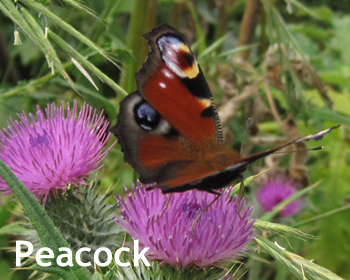 The past month of fantastic warm weather has seen an apparent complete turnaround in the fortunes of many species, as the sun’s life-giving energy permeates through all trophic levels, from plantlife all the way up to the top predators. One group of insect animals, the Lepidoptera (butterflies and moths), seemed notably absent, until very lately, when they have burst back into our attention. 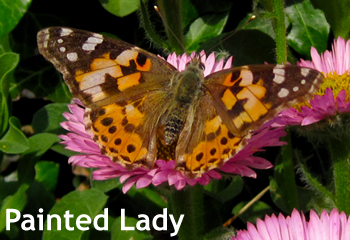 The lack of lepidoptera between late spring and summer is a natural phenomenon, shaped by changing seasonal weather patterns. Termed the ‘June Gap’ by observers, it indicates the degree or lack of overlap in the timing of lepidopteran life cycles. This year has seen some unusual weather patterns, with a prolonged cold wet spring, but the latest hot spell has sped up the emergence of the adults. Reproductive activity is in full swing.

You will now come across groups of the Large (Pieris brassicae) and Small (Pieris Rapae) whites – of the family Pieridae – which can be seen fluttering above fields of maturing rape crops. Their Latin names are a reflection of their predilection for brassicas generally, giving them the common name ‘Cabbage white’. By the time these whites have emerged, another

member of the Pieridae, the orange tip (Anthocharis cardamines), whose adults emerged in early spring, will have largely died off, leaving the larval then pupal stages to overwinter. Orange tip females look similar to small whites, having no orange colouration, but are unlikely to be present at the same time. 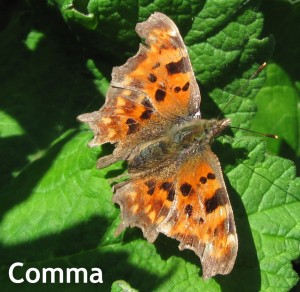 Several of our most easily recognized butterfly species are members of the Nymphalidae family, including the Peacock (Inachis io), Comma (Polygonia c-album), Painted Lady (Vanessa cardui), Red Admiral (Vanessa atalanta), Speckled wood (Pararge aegeria), Small tortoiseshell (Aglais urticae), and Gatekeeper (Pyronia tithonus). Most of these can occur throughout the warmer months of the year but tend to peak towards the end of the summer months. They are all flitting about in a hedgerow near you during August, along with many more species too numerous to mantion here. 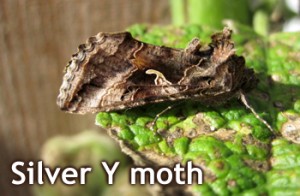 Among the many moth species you are very likely to encounter lately is the Silver Y moth (Autographa gamma), a migrant from Europe that arrives in two waves in spring and summer. Individuals vary in colour but are generally a cryptic mottled grey looking like old woody material; the forewings display a characteristic Y shape. They are active by day as well as at night. Their arrival here in large numbers is a potential harbinger of the arrival of another impressive individual, the Hummingbird Hawk moth (Macroglossum stellatarum).

Hummingbird Hawk moths are a generally unremarkable buff-grey, with orange-brown underwings and a black and white checkered body. Individuals are attracted to tubular-flowered foodplants, including Hedge bedstraw and Red Valerian, which grow in abundance all over the Roseland. They will likely visit any similar, nectar-rich species such as buddleia. As the name suggests, this species is like a hummingbird in flight and behaviour, making it very difficult to photograph. Hence I do not yet have one to display! To see images of Hummingbird Hawk moth, visit here at UKMoths.org.uk or Butterfly Conservation. The species hummingbird-like behaviour is the cause for numerous calls to the RSPB every year, by people wishing to report sightings of hummingbirds!

There is still time to take part in the Big Butterfly Count, taking place from 20th July until 11th August. Records can be logged up until the end of August. So come on everyone, let’s put the Rosleand on the lepidopteran map at:

Our Cirl pairs are working hard this season to bring their broods to fledging. By the end of July 2012 there were just 5 fledged broods, despite extra feeding supplementation, apparently due to the prolonged wet weather. This year we have 16 fledged broods at this same milestone, and there are still more on the way into August. This is now looking very promising. With an average of roughly 2 fledged young per breeding attempt (and some pairs manage to fledge more than one brood in a season), we may have enough birds to be hopeful of a stable population establishing in the next year or two. It all depends very much on the weather. Let’s hope 2014 is as good a summer as this one has been, if not better.