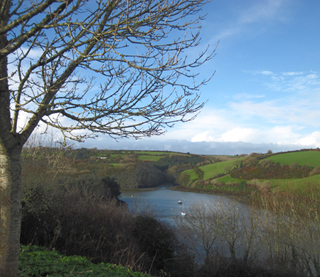 After the wettest and mildest December since 1934, a slightly drier January has followed with no further threat of a real winter, despite the fears expressed for a cold snap. The effect on nature has been interesting.

You may have noticed that much of our plant life has still been growing and blooming, despite the low light levels in often wet and windy conditions. Many daffodils and other narcissi species began blooming weeks ago and some have finished doing so. Wild strawberry plants could be seen with still ripening fruits in December; dandelions started blooming and setting seed amongst the ever-growing grasses of garden lawns and grazing pasture alike. Primroses were already out in sheltered spots along hedgerows, and even kingcups were blooming in local ponds. Some hedgerow shrubs such as honeysuckles were showing fresh growth at their tips. 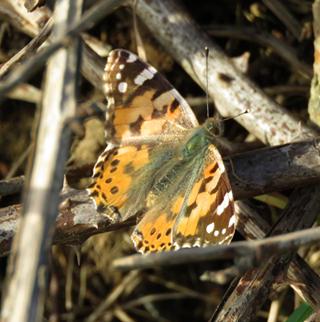 In both December and January, large numbers of insects, including the occasional moth, butterfly and bumblebee, were still active, especially on calm bright days. The Painted lady shown here was seen on the cliff path near Curgurrell on 24th December. It should normally have set off on its migration south long ago. Clouds of smaller flies active in sheltered spots have been a welcome source of protein for bird species, along with the ripening seeds of weedy plants growing along field borders and amongst stubble. The period of winter famine, normally brought on by sharp cold weather, has not really happened yet. Birds are currently much less reliant on the supplementary food provided at bird tables and feeding stations, than they would normally be at this time of year, simply because there is still natural food available. 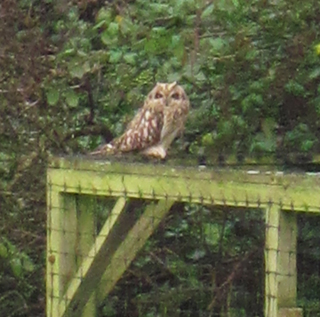 Amongst the more unusual sightings was s short-eared owl (Asio flammeus), which visited the Lanhay area in January. Sightings of this winter visitor are generally rare in the Roseland, because in the UK they are most likely to be found in Scotland and the north of England. However, they distribute themselves more widely in winter, in search of their preferred prey of voles and other small mammals. Coastal wetlands are the preferred winter habitat, where the owls may be seen active during the daytime. To the untrained eye, short-eared owls are similar in size and overall appearance to tawny owls (Strix aluco), but their paler facial plumage with dark angular shapes around the eyes distinguishes them. The picture showing here is unfortunately not the best, as I had only my small camera at the time and it was raining. For some lovely images of short-eared owls, visit the BTO’s web page at http://www.bto.org/national-offices/scotland/short-eared-owls-mysteries-revealed. Short-eared owls are an amber listed species of conservation concern, as their population numbers have declined significantly across the European region. 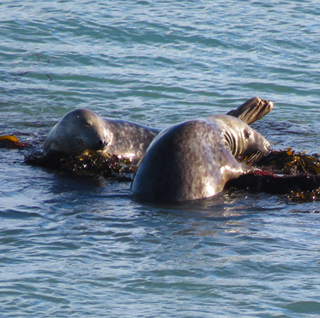 One place to visit whatever the weather is Towan beach. Just to the south of here when the tide is out, in a small cove overlooked by the South West Coast Path, you should get a good view of large numbers of grey seals. The largest number seen so far is 35. Most animals may be hauled out on the sand, or perched on rocks around the cove entrance, while others will be loafing in the inshore waters. Although there is a viewing point off the coast path directly overlooking the cove to the south, be aware that seals are uncomfortable and disturbed by the sight of humans staring down at them; they are likely to head to the water and disappear. Viewing them from the cliff path is therefore recommended.

Things to do this month for nature 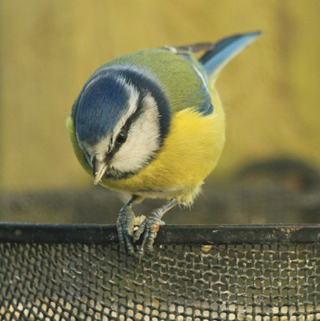 Despite the mild weather, do keep putting out food for the birds, as they will still appreciate the opportunity of easy resources, and this will always help them in the breeding season soon to come. And, as always, regularly clean those feeders!

If you want to do more to help care for and protect our Roseland wildlife and wild places, then why not consider getting involved with the Wild Roseland group? Part of the Roseland Development Plan, the aim of Wild Roseland is to conserve and enhance our unique Roseland habitat, with the possibility of enhancing our local economy through environmental projects. A number of project ideas are currently in development, such as:

If you would like to get involved, then the next meeting of Wild Roseland takes place at Ruan Reading Room on February 15th, at 10:00-12:00 am.