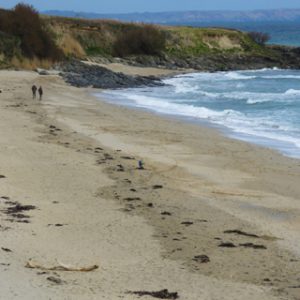 The next time you take a walk along the strandline of one of our many beautiful beaches, take a little time to notice what has been washed up by the sea. While a little of the debris is the undesirable rubbish of human existence, much of the material is natural and forms an important, if temporary habitat for living things.

As the high tideline falls gradually lower after the top of the lunar cycle, a mix of decaying material becomes increasingly deposited. The material is often present plenty long enough to establish ephemeral food webs of fauna, at least until the next spring tide. In the main, these creatures consist of detrivorous invertebrates – sandhoppers, woodlice, flies, beetles and weevils – that break down material such as sea weed, driftwood and the occasional carcass of marine animal. By far the most abundant of these creatures is the sandhopper, Talitrus saltator. 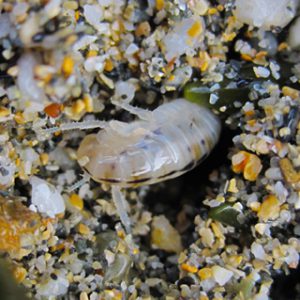 It has been the subject of much recent scientific study, as its behaviours are strongly influenced by the cyclic changes in the environment of tide and day/night. During the day these animals burrow into the sand, or hide away under the moist rotting strandline debris above the high tideline; they emerge at night to feed in the relative safety of the darkness, out of sight of predators.

When predators do run across them, sand hoppers attempt escape by standing on their legs and flicking their abdomen sharply out from underneath. The direction of escape is completely random, so individuals rely on the presence of hundreds of other sandhoppers also pinging off in all directions in order to confuse predators and to avoid becoming a meal. 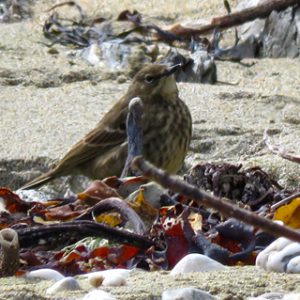 Disturbing a pile of stranded sea weed and other debris reveals a jumping madness of pinging sandhoppers. Despite this survival strategy, sandhoppers do fall prey to the many shore-foraging birds that turn over the piles of rotting debris, such as the rock pipit (Anthus petrosus), shown above.

The contribution of citizen science in supplying huge amounts of data has given us more insight into the effects of climate change on bird migration. A new study published by the BTO indicates that our summer visitors are remaining here longer as our climate warms and the breeding season is extended. Although we have heard a lot of negative reports on the effect of climate warming on nature, this time the effect is positive: migrant species returning to breed earlier are showing positive trends in abundance. You can read more here.

The swallows returned to us in April, but have you seen house martins yet? A number of them are known to nest at Portscatho, for example, but maybe you have seen them elsewhere. This species is currently amber-listed, its UK population falling into rapid decline, and we need to know why, in the hope of reversing this decline.

So the BTO is asking the public to help by taking part in a house martin survey over this summer, if they know of house martins nesting near to them where the nest can be monitored easily. You can find out more here, including how to register and take part in the survey. Your contribution to this important citizen science will be greatly valued.