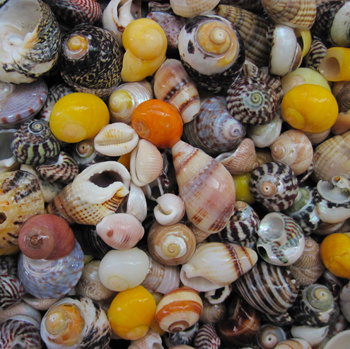 Sea shells: these abundant jewels of the sea lie scattered amongst the sand and rock of our secluded Roseland coves; they are fascinating, beautiful, endlessly collectable. They were once the exoskeletons of the sea creatures who made them.

Shells are formed mainly of the mineral calcium carbonate, plus a small quantity of protein, through a process called bio-mineralization. In simple terms, the animal’s body cells exude calcium ions that combine with carbonate ions from seawater. As the animal grows, the shell also grows around it in three distinct layers: the outer periosteum, which is not calcified, plus a middle matrix and inner lining layer which are calcified. In some species the inner layer is pearly.

The variety of colours that we see presented in the outer periosteum layer depend on the species of mollusc that made it: where it lives, what it eats, when it eats certain foods and when it doesn’t, and even how it communicates its existence to other species members. 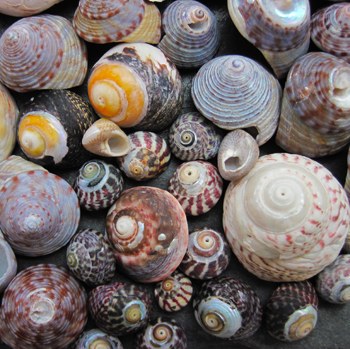 Some of our most colourful shells belong to the group classed as the top shells, comprising several species of mollusc that subsist purely on the algae growing on rocky shores, from the intertidal range down to a depth of 150 metres, depending on the species ecology. Like their relatives the land snails, these marine animals possess stalked eyes on the head and a number of paired sensory tentacles on the body for seeking out food, shelter, predators and, of course, other members of their own species. They move about by means of a muscular foot beneath the head, carrying their protective shell on their back. The sensory tentacles, located on the head or foot, depending on the species, are extended when the animal is active. When the animal is dormant, it retires entirely into its shell.

Shell colour, shape and size vary between species, as well as age of animal, but they all share the same mother-of-pearl inside layer that tends to be revealed as the colourful outer layer is worn away over time. If the shell is still occupied, the degree of wear can be used to guage the age of the animal. Shown above are examples (left to right) of the Grey top shell (Gibbula cineraria), Purple top shell (Gibbula umbilicalis), Painted top shell (Calliostoma zizyphinum), Thick top shell (Osilinus lineatus), and the less common but often impressively large Turban top shell (Gibbula magus).

Another group of commonly found shells with a wide variety of colour morphs belongs to a single species of periwinkle, Littorina obtusata, the Common flat periwinkle. These animals live among the algae of the lower intertidal reaches, including areas of lower salinity in the muddy Roseland creeks. The habitat is the main factor in influencing the outer shell colour, which ranges from browns, oranges, greens, yellows, to almost white in some examples. 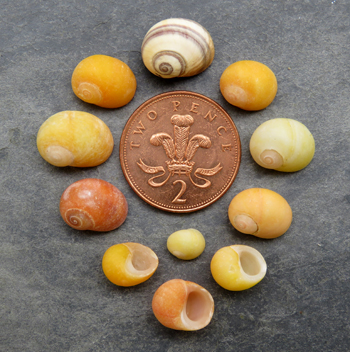 Littorina obtusata has been used in very recent studies at Plymouth and Exeter Universities to understand the potential effects of oceanic acidification, caused by increasing human-induced levels of atmospheric carbon dioxide. Oceanic acids react with carbonate ions, reducing their availability to the embryonic stages of molluscs like Littorina obtusata, affecting their development into adulthood. It is not yet known if species such as these can adapt to increasing oceanic acidification in the longer term, but we do know that oceans are increasingly acidic in cooler regions, such as the north Atlantic. Studies like these may therefore help us to predict the outcomes on nature of dealing or not dealing with human-induced climate change. Download the PDF of the full published paper here.

If you are interested in UK shells and would like to know a bit more about them, you might consider joining the Conchological Society of Britain and Ireland. The Society runs indoor and field meetings and also has an e-mail group: conchology-uk. 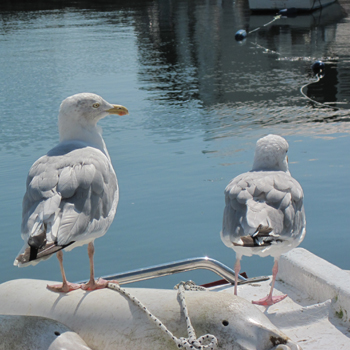 Results from research published in Birdlife’s “red” list of threatened European bird species reveals that puffin, fulmar, kittiwake and balearic shearwater are all listed as endangered and vulnerable. All these species can be seen in the Roseland at different times of the year. It may also interest readers to know that the Herring gull (Larus argentatus) is still also red listed as vulnerable. If you love this bird (and even if you don’t), please inform and educate those around you, who think that these animals should be culled rather than modifying our own behaviour with respect to them in certain seaside locations. Relations between humans and gulls here in the Roseland remain very good and many of us value their tolerance of us in what is, after all, their home environment. 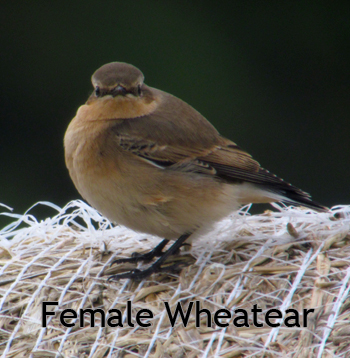 A number of migrating species are starting to appear, either on passage further south or north, or to settle here for the winter months. Already the first wheatears and grey wagtails have turned up along the coast, while waders such as curlew, whimbrel, redshank, greenshank, and little grebe are busy on the mud in the Fal estuary at low tides. If you’re lucky you might also come across pied and spotted flycatchers further inland, as well as redstarts, willow warblers and whinchats. Out to see the first Black throated and Red throated divers will be arriving very soon, along with an occasional Great northern diver.

Don’t know your Redshank from your Greenshank or Spotted redshank?

Here’s a definitive video from the BTO, well worth a look:

Whilst the use of email has reduced the use of postage stamps to something of a rarity, nevertheless they are still in use and are still collectable even after posting. Which is why the RSPB still wants you to send in any stamps you can collect in aid of their Albatross appeal, raising money for their campaign to reduce the huge number of Albatross deaths from fishing. Save the Albatross is a global campaign in association with Birdlife International. You can learn more from the RSPB here.

There are a number of ways that you can send in stamps:

Please spread the word about the stamp appeal to friends and family to help raise more awareness and contributions.