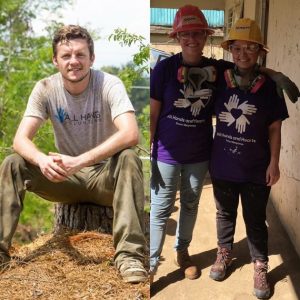 Wayne Hitchings from St. Mawes will be running the New York marathon to raise money for the disaster relief charity this coming weekend.

You may remember Roseland Online‘s feature with Wayne as he went up the Himalayan mountains for charity a few years ago under our feature Wayne’s World.

Since 2004 the charity, All Hands and Hearts, have set up projects in response to natural disasters all over the world. They use volunteer power to bring communities back to their feet by demolishing unsafe buildings and clearing rubble or rebuilding schools and homes.

Wayne told Roseland Online, “I have never ran a marathon before but I have been training hard on the roads of the Roseland. Just under a month ago I completed my first ever race in the Ealing half marathon and feel as ready to go as i’m going to be!”

Asked about the charity, Wayne added, “My most recent volunteer trip was in September 2018 to our project in Lombok following the twin M6.4 and M6.9 earthquakes in August which killed around 500 people and displaced more than 300,000. We can only continue to do the work we do with your generosity.”

If you would like to help him reach his £750 target. You can find his donation page here: www.justgiving.com/fundraising/wayne-jennettnycmarathon