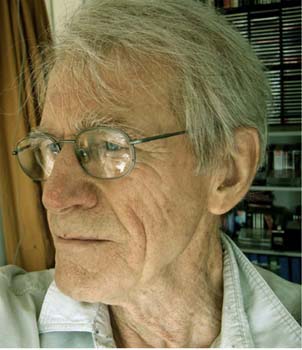 Graham Oakley is one of the UK’s best loved children’s illustrators and authors. He was originally a set designer before moving to the Royal Opera House and then to the BBC to work on costume dramas, eventually leaving to pursue his passion for illustration.

Having loved Graham’s books since I first chanced upon The Church Mouse whilst browsing in a bookshop, and having since read and re-read (many times) all his books, I was thrilled to have the opportunity to ask him about his beautifully detailed drawings and delightfully witty stories.

“After leaving the BBC, I began converting an old water mill in Wiltshire. The mill’s longest residents – the mice – gave me the idea for a series of books. The mice were the protagonists in the stories, and then I thought it would be nice for them to be befriended by a natural enemy, a cat. His being influenced by a sermon I hoped would account for his fairly peaceful relationship with creatures that should be his prey.”

Graham describes Sampson (in my view the real hero of the stories) as “just a common ginger cat you might see anywhere. I’ve never owned a cat but I do have a weakness for undomesticated ginger toms. Using animals as characters is a great ploy; it avoids all the problems arising from class, race and gender.” 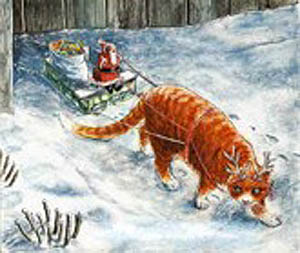 I love the stories and the drawings equally and I wondered what came first. “You have to have some kind of story first of all and work out what will happen on each page. So really the writing comes first and dictates the size of the pictures. When I was doing the Church Mouse stories they had to be 32 pages – no more and no less. Having trained as an illustrator, the drawings have always been the important thing with me. I never much enjoyed illustrating other people’s books. When you write your own text you have the freedom to tell visual jokes, add incidents not described and so on.”

“I like to be by myself when I work. I have a work room at the top of my current house with a view of the sea. I listen to recordings of classical music when I do the illustrations, but need silence doing the text as I can’t afford to be distracted. ”

And his readers? “I’ve never really thought about a target audience though I did rather hope that parents would look at the book with the child, as some of the words and things alluded to would need explaining and perhaps expanding.”

“I think children like to feel part of a friendly group all living together cosily, like the mice in the church. They want the characters to be small and not particularly well behaved, with manners and habits not all they should be. They enjoy detail, something they can pore over and not get tired of too quickly. I can’t believe they like the gaudy splodges that pass for illustrations in some children’s books.”

“When I did the first stories I was working as a production designer in television. Doing books was light relief. Later on when I became self-employed and moved to the water mill, I worked on a book during the winter months and restored the mill during the summer. The need to earn the necessary funds was all the trigger I needed to keep producing books.”

In addition to the Church Mice series, Graham has written three books about the Foxbury Force as well as some one off books. Of his 19 books, sadly only four are in print, but he says that he is one of a group of children’s authors who intend to adapt their books for download to iPads.

He also hopes to re-publish “The Church Mice take a Break” and “Hetty and Harriet” as both are long out of print. He has recently written a version of Beauty and the Beast. So come on publishers, make it happen for his many fans! His drawings are such a delight – every reading brings a new detail or a subtle nuance to the story, there is such gentle humour – all surely due for a comeback in children’s literature. And if there are any animators out there, maybe Sampson can be the star of Christmas TV this year?

Finally, a hint for adults – buy one of his books for yourself…it will brighten up the winter evenings… I promise!