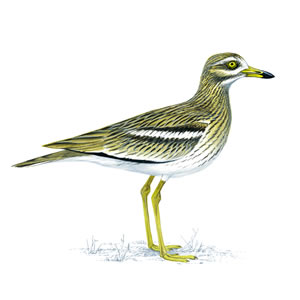 Who’s ever heard of the bull-nosed swollen-knee? No? How about Burhinus oedicnemus? Still nothing? What if I said stone-curlew? Now I hear a tiny groan of recognition, though I suspect that many of those who have heard the species may hail from beyond the Roseland’s shores. Not many people have ever seen or heard a stone-curlew (not to be confused with the totally unrelated Eurasian curlew that is more familiar to most of us). That’s partly due to their excellent camouflage, partly as a result of their nocturnal habits, and also because the UK population is restricted to just 400 pairs across two locations – the Wessex area around Salisbury Plain, and the Norfolk and Suffolk Brecks. Sadly a Roseland sighting is extremely unlikely.

So I don’t suggest you go rushing out in search of stone-curlews immediately, although if you were to don the wellies and bins and set forth, now would be a good time to choose as they have just started returning to the UK. In winter they spend time sunning themselves in southern Europe and North Africa. And who can blame them?! When they return, they search out suitable nest sites with their partners, and this is largely where it went wrong for the species. Stone-curlews are quite fussy individuals. They would dearly love to nest on tightly grazed grassland, but much of what was once available has now given way to agriculture or plantation forestry. So instead they nest in arable fields, where the eggs and chicks are vulnerable to farming operations. Add to this a nervous disposition that means they are easily disturbed, and its little wonder that the population fell so heavily – by 85{c8c3b3d140ed11cb7662417ff7b2dc686ffa9c2daf0848ac14f76e68f36d0c20} between the 1930s and 1980s! At one point the estimated population was just 150 pairs. 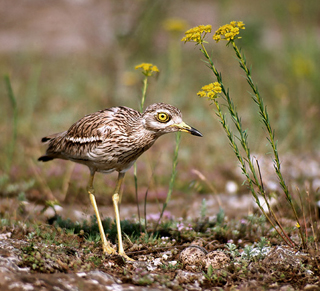 But things are looking up. The population has increased over the last twenty years due to ongoing conservation work and the efforts of dedicated farmers and landowners. Special plots can be created on agricultural land, which are managed specifically for stone-curlews as part of the Environmental Stewardship package. By preparing the plots in February or early March, the farmers create the bare or sparsely vegetated ground that the birds favour for their nests. When sited in open areas, away from sources of predation and close to suitable foraging areas, these plots are a haven for nesting stone-curlew. During the breeding season further management may be necessary to keep conditions suitable, usually by spraying to keep vegetation in check, and close liaison between the farmers and the RSPB field staff ensures that as many young birds as possible make it through to fledging. 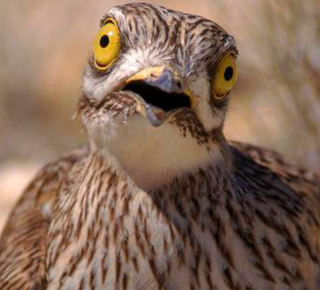 Which is a big thumbs up if you’re an oedicnemus enthusiast! In some ways it’s hard not to be. You have to admire a bird that looks like a relic of the cretaceous period. Their giant eyes give the impression that they are continually surprised or slightly drunk. For many centuries it was believed that making eye contact with a stone-curlew could cure jaundice, a view which lead some stone-curlew owners to keep them under canvas to prevent ‘free’ treatment! In fact these eyes allow the birds to be active at low light levels, and they are busiest at dawn and dusk. In autumn, great gatherings of stone-curlew can be seen in a handful of sites where they roost together. And then it’s back off on migration again, but most don’t leave our shores until as late as October, giving them one of the longest summer stays of any of our migrants.

Much like the Roseland’s very own cirl bunting population, the stone-curlew relies heavily on the work done by farmers and landowners. And most are very enthusiastic about the birds they see on their farms. Much of the work done for the stone-curlew will have benefits for other species too. Lapwings often use the plots to nest in, and an ongoing project in partnership with the Game and Wildlife Conservation Trust is investigating how we can make the management even more suitable. The similarities between the stone-curlew work and the cirl bunting project doesn’t end with habitat provision. Both species’ UK population fell to an all-time low in the 1980s, and both have recovered since then thanks to ongoing conservation work. These programmes take time, and there is no instant fix, but they both should be rightly praised as examples of where farming and conservation can work together for the benefit of the environment. And long may that continue!