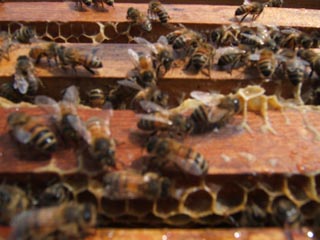 Well, May has been slightly better than the previous months – but Spring is still not here yet! The bees, however, are busy inside their hives, the queen laying brood for all she’s worth and the colonies that have survived the winter are growing larger by the minute – though still short of stores. This is because the food that is being brought in from the fields is immediately being used to feed the young larvae, so there’s very little left to feed the adults or to store. I am still feeding bees, as I have been since a year last December!!

However, the good news is that my chosen colonies for making new nuclei have reached the point where I can start splitting them, one of them already feeling it was being kept short of space and so started building queen cells. The colony was immediately put through what beekeepers call an “artificial swarm” manipulation, resulting in two colonies and no loss of bees. Additionally, the bees think they have swarmed and so are quite happy. The half that did not have the queen has all the queen cells and I have waited until the queens were about to hatch out before cutting them out and placing them in queen cages, which were then put back into the hive between the frames in the super. 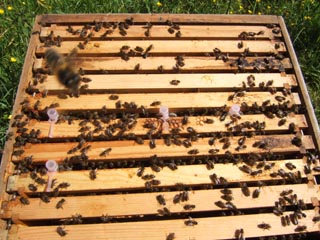 The timing of this is critical because if it is left too late either the bees will tear down the cells surplus to their requirements or the first virgin queen to emerge will sting through the outer surface of her rivals’ cells to remain the sole ruler of the colony. As it turned out, I was there in plenty of time (or so I thought, as all the cells were intact) and started to cut out the cells (remembering to leave one to emerge as the single and only queen of the colony).

As I was gathering the cells, I placed the first few inside the special queen cages and inserted them into the super, between frames, so the bees would look after them when they hatched and, being confined, the queens would be safe from one another). The remainder I started placing in vertical holes cut in some foam that I had brought to the apiary for the purpose. As I did, I suddenly noticed a queen emerging from one of the cells – then another! The faster I was cutting out, the faster the queens were emerging (mind you, it was a hot, sunny day – maybe that made the difference). 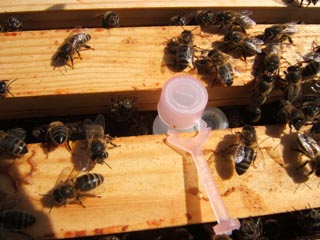 Anyway, having walked back to the house, with two queens crawling all over my hand and up my sleeve (being newly emerged they could not yet fly), to collect more containers, I went back to finish the job – but I had run out of queen cages and hair curlers to hold the queen cells (these are important as without some protection the virgin queens are susceptible to a pre-emptive strike by any other passing virgin!). I just stood the rest upright in an old cold box which I had previously warmed on the Aga and, having replaced the cold box on top of the simmering lid of the Aga, thought the job was done.

No way! Queens have been emerging from these cells on a daily basis since then, so I have been frantically making up nuclei of queen-less bees (taken from colonies that I deemed populous), and inserting the virgins directly into these nuclei (being virgins, they have no odour, so are more readily accepted by the bees – or that’s the theory but I will let you know the outcome next time). 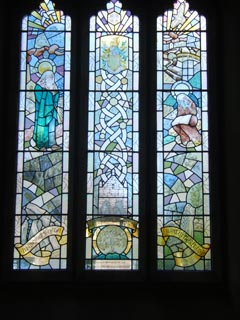 On Sunday, I had to go to St Cleer for a Dedication of a church window that had bees and honeycomb as part of the coloured glass. On my return, what do I find but another two virgins emerged and awaiting my attention! I think all this will make up my colony losses over the last winter (nearly 50{c8c3b3d140ed11cb7662417ff7b2dc686ffa9c2daf0848ac14f76e68f36d0c20}, a figure that is reflected, on average, across the whole of the UK). But swarms are still important – I personally still have my two top-bar hives to populate – so whoever collects them, make sure that swarms are collected by contacting me or any other beekeeper, who in most instances will do the job free of charge.

Remember, honeybees are on the endangered list (despite the upcoming ban on the use of neonicotinoid insecticide sprays) so every swarm is valuable to the planet, as well as the beekeeper. Anyway, I must get back to my nuclei – you know, beekeeping is a little like gardening: nothing happens in the early Spring and then, suddenly, it all happens overnight! Perhaps I should take up a different hobby!!