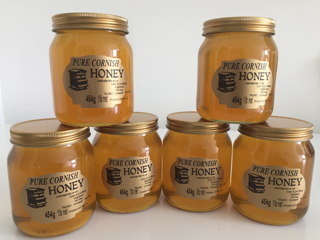 Well, I think the latter part of August might have made up for July in terms of summer weather – hasn’t it been hot? Whilst the heat has prevented me from doing as much in the garden as I would like, it certainly hasn’t stopped the bees from working their socks off to bring in the last drops of nectar in the flowers that are later this year, thereby allowing the bees an “extension” to their season.

I have to say, the whole season appears to have been shifted two or three weeks later all the way through because of the weather. Colonies were slow to reach their maximum size having already had a slow start because of the cool Spring – they came through the winter quite strong but seemed to “plateau” for a while, not growing in numbers particularly noticeably – and nectar was slow and late coming in, so the bees are still gathering nectar now in late August when generally the whole show is over and the bees are knuckling down to prepare for winter. 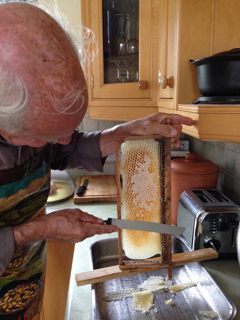 I mentioned last month about taking honey off the hives when their was a nectar flow occurring and how the bees took no notice of my thefts if done then. I went to the last one of my hives at home at the beginning of August, when the weather was a little cooler, and the bees really made it quite clear they were not having any of it, though I had removed honey from adjacent hives only a few days before!

I smoked them and removed the crown board to get at the honey combs in the top super and they went berserk! After allowing my bee-suit to endure several stings, I decided that it was folly and unfair to the bees to continue, so closed the hive up and gave up the idea for that day. I had exactly the same experience with one of my Portscatho hives as well, but because of the travelling involved I decided to persevere, but, my word, they were not happy.

Even at the end, when I had closed the hive up and walked away, I was followed by a small cohort of bees who really wanted to make sure I was going and not coming back! I even had to drive away wearing my bee-suit with bees harassing me in the car, until I was able to pull in to a lay-by, release the bees and change out of my bee-suit, before continuing my journey home. I just never want to hear any of my customers ever complaining about the price of honey! 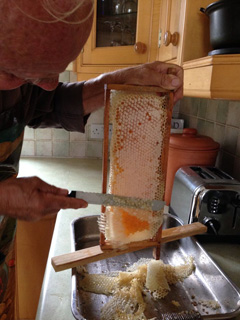 I went back to my last home colony a week later and it was as if butter wouldn’t melt in their mouths (it wouldn’t!). They allowed me to remove the combs, to shake the adhering bees off those combs back into the hive and take the combs of honey away, with no problem whatsoever. Why? The weather had warmed up and a small flow was occurring which allowed the foragers the opportunity to get out of the hive and do what they are best at – gathering nectar and pollen. They were usefully engaged and not hanging around the hive looking for trouble.

So what do I have at the end of all this honey removal? Not a lot! The season (for me) has been poorer than last year (which was pretty poor anyway) and I have had to resort to cancelling early orders for honey for locals who wanted supplies to take up-country for their family and friends. I will have to be as abstemious with this year’s crop as I have been with last year’s in order to satisfy the needs of my regular customers.

Whilst I have heard of similar scenarios across Cornwall, it appears that nationally the season has been a good one from a honey crop point of view. So what’s to be done? Well, not a lot really. The bees are in a situation where there is plenty of forage (though limited to 180 degrees, since the sea is in front of them), the queens are young and fecund. What is left is the climate and the weather. 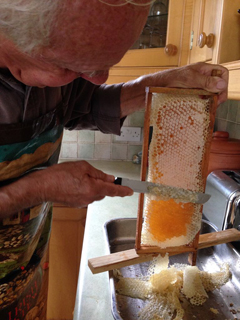 As I said, the seasons appear to be delayed (though prolonged) and it will take I don’t know how long for the bees to adjust their development cycle to adjust to this fact – it certainly won’t happen overnight. As for the weather, well there’s not a lot we can do about that. We beekeepers are like farmers in that respect, totally at the mercy of the weather. If it’s too hot, the ground dries out and the plants can’t produce nectar. If it’s too cold, the plants can’t produce nectar either. If it’s too wet, the bees can’t get out to collect the nectar (or the nectar is washed out of the flowers’ nectaries). How bee farmers are able to forge a livelihood out of beekeeping is a mystery to me, but they somehow manage it.

On a more positive note, I have some very healthy colonies of bees ready to go into the winter, though I have lost three so far through queenlessness (this is within the 10{c8c3b3d140ed11cb7662417ff7b2dc686ffa9c2daf0848ac14f76e68f36d0c20} expectation normally experienced by beekeepers in general). What sometimes happens is that the queens either have not mated properly and run out of sperm, meaning they cannot lay fertilised eggs, or they just die for some inexplicable reason. 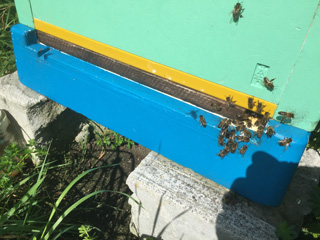 This might be down to the fact that if the queens were raised in a colony which didn’t have the resources to adequately feed them, the queens don’t develop properly and this shortens their life-span. Insecticides being brought back to the hive in nectar or pollen also have a negative effect on the life-span of the bees and queen, so this could be a reason. Again, this is something that is not easy to control or foresee – but hey, we’re beekeepers, we can only do our best. What bees I have I will look after and give every opportunity for their survival – because it affects our survival – but there are some aspects of the craft that are beyond our control as beekeepers. 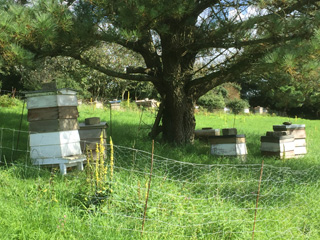 Another positive is that I have seen some early flowering ivy plants in my garden covered in bees and other pollinating insects – this augurs well for the autumn for the bees, allowing them to build up adequate stores to see them through the winter. I am also hoping for a surplus for my ever-demanding customers!

A final positive is the fact that when I recently sent off a sample of hive debris for analysis at the bee labs, the results showed no evidence of Varroa. Are my bees learning to cope with this parasite? Or was it just luck? Another sample has to be sent in September, so we shall see. It would be good to think that all my hard work in rearing Cornish black bees and my management regimes were producing such positive results, but it’s early days yet – I’m just very hopeful!