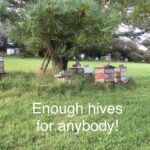 So that’s 2020 out of the way!  Things can only get better from here on in.  Beekeepers always say that next year is going to be the year, when their bees will bring in the best honey crop ever and swarming will be a thing of the past, but since that has never yet happened it has to be 2021 when it finally will!

I have to say though, from a beekeeping perspective, 2020 was not a bad year for me and my bees.  The honey crop wasn’t the best, though acceptable (especially with the bonus of the late ivy crop), but the general health and robustness of my 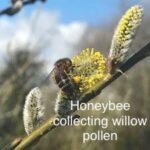 colonies certainly benefited from the lock-down and the reduction in pollution.

This has set them up very nicely for the new season, which, despite the almost continuous wind and rain, has actually already started.  We’ve passed the winter 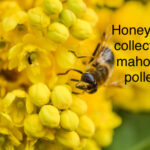 solstice, so days are going to be getting longer which will result in the queens increasing their laying rate in anticipation of the nectar flows that will begin round about March time.  Prior to that, and whenever there is a break in the weather, the bees will be out collecting pollen form the early sources that are around such as gorse, mahonia and willow. 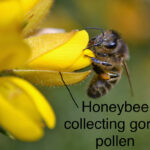 This is always a good sign of a healthy colony and a laying queen, but the bees have not had much of a chance over the past several weeks so we’ll have to be patient.

The problem with winds such as we’ve had recently is that not only are the bees unable to fly (they fly at a maximum of about 15mph, so need conditions that allow them to make progress against a headwind) but the hives themselves can be susceptible to being blown over or having their rooves blown off.  I have had two hives blow over during the past two months, one at an out-apiary and one at home.  The one at home I spotted quite shortly after it happened, because I always check my home apiary after a night of high winds. 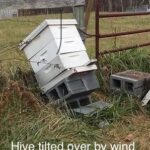 The hive here was basically just blown sideways in its entirety and I found it leaning at a precarious angle like the leaning tower of Pisa, with part of the floor on its stand and the opposite side of the floor on the ground.  The whole had been more or less held together by virtue of the external lifts that surround a WBC hive, the only problem (apart from the angle) being that the crown-board had been shifted about 1” to one side, making for a colder brood chamber.  This was quickly corrected and the hive put back on its stand with no reaction from the bees, who obviously appreciated what I was doing for them!

The hive at the out-apiary was a different situation.  The whole hive had been blown onto its side, the outer lifts had separated from each other, the bottom brood box had separated from its floor leaving the bees totally exposed to the elements and the crown-board had been thrown off as well.  When I first saw the hive, there were no signs of life and I feared the worst.  I could see the seams of bees in between the combs and they were lifeless, presumably having died from the exposure to rain and cold.  But when I looked more closely and when I touched the bees, there was a reaction, a movement.  They were miraculously still alive!  The combs were wet, the gaps between the combs either side of the bees were filled with wet leaves that had been blown there by the wind (so the hive had been like this for quite a few days!), yet the bees had survived against all the odds.  I gently cleared the dead leaves from between the combs, then separated the roof and lifts from the pile, trying to disturb the brood box as little as possible.  Once I could get at the brood box, 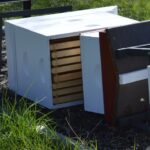 I placed the floor against its base and the crown-board on its top and lifted the whole lot back onto its stand (easier to say than to actually do!).  At this point the bees had had enough and came out in their hundreds, enquiring as to what was going on – but they were not in any way aggressive.  This did at least show that the bees were far from being dead!  Once all the hive parts were back in place, I placed a fondant feed over the crown-board feed-hole (which was initially why I was there) and left them to it.  They seem none the worse for their experience but it’s not one I want them to have to endure again.  With climate change progressing as it is, I guess I’m going to have to get used to high winds and increase my hive protection from them. accordingly. 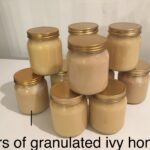 I finished processing my ivy honey in early December (I’d had an ultimatum to clear the utility room in time for Christmas!).

However, when I came to the final super, the first comb was ivy honey but the others were all blossom honey and therefore extractable!   So, first question – why?  I was expecting all the combs to be ivy so how did I end up with a combination?  I can only assume that I mistakenly thought the super when on the hive was empty and left it at the end of the summer, so the bees just carried on storing ivy nectar once the ivy started flowering.  However, I was now faced with a second question – what to do?  My extractor had been cleaned and stored away for the winter and I didn’t want to have to re-assemble it, use it, disassemble it and then clean it again just for a single super.  Should I melt the blossom honey combs?– but what a waste of wax comb and all that hard work the bees had put in.  Then the obvious hit me – use it for cut comb honey, a 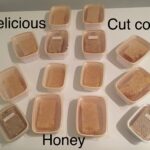 delicacy and a highly-valued product of the hive.  No, the combs would not be available for the bees to use again but it would allow me to take a prized product made by the bees, untouched by human hand.  So I cut up the combs into blocks and I now have a store of cut comb honey in the freezer for my customers – and a goodly amount of trimmings for me!  What a delightful end to my honey season, as cut comb honey has a taste quite different from run honey, for reasons I cannot explain, and is absolutely delicious!  I have also been able (reluctantly!) to give some away as Christmas presents – but not too much!

So, quo vadis?  I’m marking time at the moment until Spring arrives, feeding fondant to my bees as needed (some of whom are devouring it avidly whilst others are ignoring it) and continuing with hive repairs and 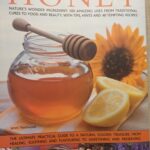 maintenance.  The problem is that with lock-down and self-isolation (which is our choice and not obligatory) followed by Christmas, our motivation levels have fallen considerably and it’s quite difficult to actually do anything!  Hopefully this will change once the weather eases up and we can get outside again.  Until then, in my case it’s a matter of reading and extending my knowledge, one of the attractions of beekeeping being that there is always something new to learn.

I hope you had a good Christmas and that we all have a Healthy and Covid-free New Year.