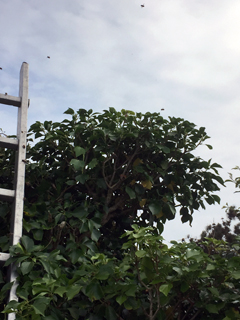 This past month has been a bit of a disaster beekeeping-wise. First of all, I was called to pick up a swarm at a caravan park at 8.40 one morning. As ever, off I went and found a small cluster of bees (likely a secondary swarm or cast) in the base of a hawthorn bush, with virtually no bee traffic coming or going. I put this down to the fact that it was cool, the mizzle was just starting to clear and it was too cold for them having obviously already spent the previous night in the open air.

After appropriate pruning of branches that were in my way, I held the branch on which they were clustered with one hand and cut just beyond there and lowered the severed branch into my swarm box – no flying, no stinging, total co-operation.

Once home, I set up a small hive (anuc box, in fact, because that was all they would need) and that evening ran the bees in as normal. As they went in I spotted the queen, a lovely black one, unmarked! What joy! 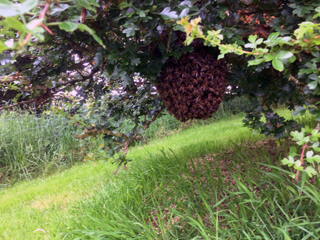 The following morning, during my apiary walk, I saw there were no bees flying outside the hive -most unusual as the bees should have been getting their bearings. On closer examination I was aghast to find score of dead, shaking and crawling bees in the hive, acting as if they were drunk.

I hoped it would be nothing more than starvation, so fed them by spraying them with a weak sugar/water mix, but later that morning I saw them swarming over the field hedge behind their hive. 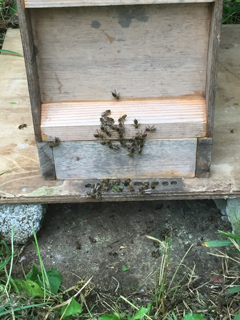 So through the hedge I go and with the aid of an extension ladder leaning against the blackthorn (!!) managed to capture them for the second time. I then hived these later in the afternoon onto fresh starters in another hive. The following day, lots more dead and crawling bees! It now looked to me like a disease called acarine, caused by a mite that infests the breathing tubes of the bees and basically chokes them.

Nothing for it then but to kill the bees before they infect my healthy ones, as there is no effective treatment currently. A very sad outcome and the first time in over 20 years of beekeeping that this has happened to me, yet… something I tell my students they need to look out for when collecting swarms of unknown origin.

So what about my bees? Well, as I write this I am in Caerphilly, South Wales, looking after my disabled daughter whilst her husband (her primary carer) is in and out of hospital. 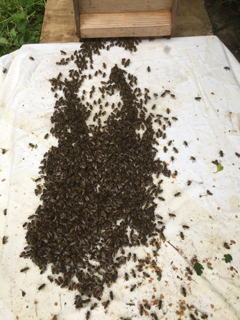 So whilst I had prepared my bees prior to our departure by giving them enough space to store honey, I have not been around to monitor swarming. Knowing the bees, they most likely waited until the car pulled out of the drive and then all swarmed in defiance of the love and care I try to give them!

If so, that will mean no honey and possibly weaker colonies going by into the winter. On the other hand, I might find strong colonies with loads of honey waiting to be taken off, but it looks to me as if 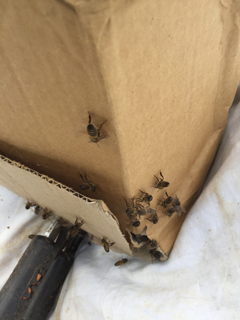 this season might well be a write-off for me with a sick daughter and son-in-law – but I think I’ve got my priorities right, since we are going to be doing this round-trip a few times this summer.

So, nothing more to say, really. Just keep a look-out for swarms and Asian Hornets, as ever, and make sure you contact somebody else, if I am uncontactable. Go to the CBKA website, cbka.co.uk, and look under “Swarms”, then enter your post-code to find the beekeeper nearest to you.